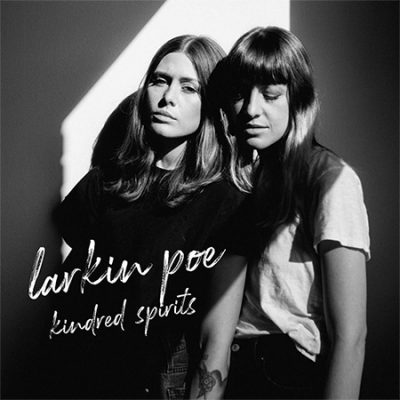 A lighter side of their work has been the slew of YouTube recordings put up, looking all very ad-hoc, in hotel rooms, maybe whilst touring, and a delight they are.Kindred Spirits is in that style, just the the two of them.

The opening track, merely a snippet, is a gauchely delightful “Hellhound on My Trail,” barely a bar or two, ending with a giggle “that’s good.” (They aren’t wrong.) This then leads into a stripped-back rendition of the Lenny Kravitz anthem “Fly Away,” the track that seems to have been used in most the publicity. As a confessed Kravitzophobe, I think it an improvement, with the first outing for Rebecca’s slide reminding what an effective player she is.

This positive continues, as they do some Neil, slowing down “Rockin’ in the Free World” to an evocative lament. Megan providing some wistful lap steel to fill in the gap between their never more sisterly harmonies. For detail, it is Rebecca that provided the bulk of lead voice, Megan the sympathetic counterpoint.

Next track, “Devil in Disguise” (Presley not Parsons), is the showstopper. Radically revamped and re-envisioned into the girls’ template, it’s recognizably the song, but one that has me wondering how the King might have fared with this sort of setting. So far, not a step wrong.

OK, I get the idea of covers records being an opportunity for performers to pay credit to the songs and influences of their youth. But “In the Air Tonight” as a sleazy bottleneck holler? Maybe the song is just too damn ubiquitous, but it makes me wince. And yes, there is a nod to the iconic drum break. This downward spiral follows as we get a “Night(mare)s in White Satin.” Again, I have little doubt the Lovells’ playing is sincere, and I can’t say they don’t make a good stab at the impossible. It’s better than Willie and Waylon, I’ll give them that.

You might imagine, therefore, that “Who Do You Love” would similarly lack muster–but you’d be wrong. This works against all the odds, the female voices giving the song a macho bite with more balls than many a version by those with ‘em. I can imagine it being tremendous live. They follow up with a plaintive wail around Post Malone’s “Take What You Want,” with another corker of a slide solo, and we are back into where we should be.

Remember where I made the Allman Brothers reference some paragraphs back? Unwisely, I fear, Larkin Poe now aspire to a romp through “Rambling Man.” Well, it’s lively, very well played and, um, different. I concede it would be great in a film soundtrack, the sort of film where an unexpected cover version is used to flag a sagging scene. Ditto a pretty straight cover of “Bell Bottom Blues,” however good, having done Dickey, Rebecca’s slide is at evoking Duane’s. Too much of a copy and too steep a song to tackle, they remind me here of Gretchen Wilson, and they are better than that.

Disclaimer: the closer is already one of my least favorite songs ever, Elton John’s nadir, “Crocodile Rock.” I’ll say this much for the Larkin Poe cover: it sits less sickly on my stomach then the original. Just. That isn’t their fault, I guess, but I could have done without the slide playing out the heinous melody all the way to the fade.

I feel bad giving Kindred Spirits, and thus, by default, the sisters such a kicking. It coulda shoulda been a showstopper. The run of songs in the first half of the set, along with the Post Malone and Diddley, give such promise of what it could have been. I hope this record gives Larkin Poe exposure. I hope it sells well. But I know which songs I’ll be humming–the ones that make this half a solid contender for album of the year. Not the ones that make it half an also-ran.