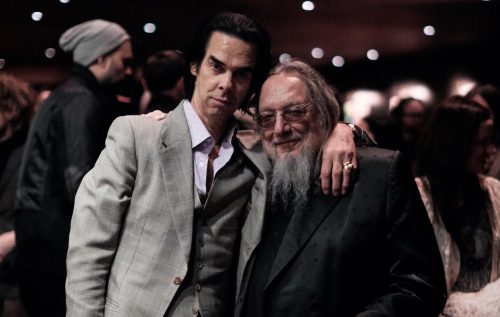 Larry “Ratso” Sloman has worked with famous musicians for decades, from embedding with Bob Dylan’s Rolling Thunder tour in 1975 to co-writing Red Hot Chili Pepper Anthony Kiedis’s memoir in 2004. But, until recently, he’s never been a musician himself. Last year, at age 69, he changed that with his debut album Stubborn Heart.

It includes a duet with his longtime friend Nick Cave, who in a forthcoming documentary calls Ratso “a very strange, exotic creature that walks backstage looking like no one you’ve ever met.” Now Ratso’s returned with a cover of Cave’s own “Skeleton Tree”:

In a recent interview with Ratso, I asked him about his friendship with Cave and how the “Skeleton Tree” cover came about. Here’s what he told me:

I was friendly first with [Bad Seed] Mick Harvey, because he would come into this bar in the East Village on Ludlow Street where my friend was the doorman. He would invite me to the shows. I would go backstage, and I’d be wearing my Ratso outfits, which is basically zoot-type suits and wild colored collars like lavender pink. I looked like I could have been an extra in Superfly or something, with a little lighter skin. Nick told me that the first few times, he would always say, who’s that guy that’s wearing these outrageous suits?

Finally, at Lollapalooza in ‘96 I think, I brought him a copy of my Dylan book. He read it and we became very friendly. Whenever he would come to New York for vacation with his wife and the two boys, his wife would go shopping, and Nick and I and the boys would go out to Coney Island. I loved the kids. Nick talks about in the movie how I treated the kids with respect. I listened to them and I wasn’t dismissive of them. He thought that was really cool. So when I heard about Arthur dying, Nick texted me. It was early in the morning here in New York. It was like a sledgehammer. I couldn’t believe it.

When Nick did the album [Skeleton Tree], Nick talked about how the songs had been written before Author died. But there was something about [the song] “Skeleton Tree” that seemed to me to be like the first attempt of a father trying to come to terms with his son’s tragic death. When I saw Nick after the first show in Brooklyn, I said to him, “You know, I tear up every time I hear that song, thinking about Arthur. You must have written that song after all the other songs on the album.” And he goes, “Yeah, I did.”

To me, that song was so meaningful that I wanted to include it immediately in my set. It was my own humble little way of paying homage to a kid that was just so vital and so amazing and so inquisitive. Such a great, great kid.

While we were at it, we also chatted about last year’s cover of his old friend Bob Dylan’s “Sad-Eyed Lady of the Lowlands,” for which he recruited a host of different female singers (including Sharon Robinson, longtime backup singer for yet another friend, Leonard Cohen) to help out.

I knew that nobody would be able to listen to me for 11 minutes straight with no breaks. So that’s why I came up the idea of getting all these great sad-eyed ladies to sing the choruses.

I had seen Bob after a show in Vegas [around 2013]. After the show, we were chatting for a few minutes. And I said, “Hey, by the way, I’m doing an album.” And he goes, “you’re doing an album?” I said, “Yeah. Nick Cave is singing on it and I got Sharon Robinson, Leonard’s backup singer, on it.” And he’s taking it all in. Then I said, “and I want you…” And I see him tense up. And I said, “maybe you can write the liner notes.” And then he like, relaxes and he goes, “I don’t know if I could write good liner notes.” And I said, “World Gone Wrong?” And he goes, “Yeah, they were good.”

I sent him a copy of the album. I didn’t hear anything bad about it. So we’ll see.

If you want to hear more from my interview with Ratso, we spoke about his time on the Rolling Thunder Revue for my Bob Dylan newsletter. Check it out here.