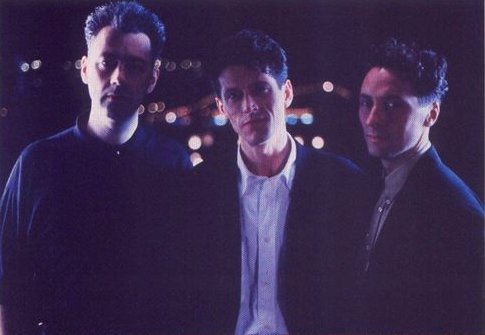 The fact is, within the history of pop, there are very few bands capable of holding your hand as tightly and accompanying you down, down, down with as much beautiful empathy as The Blue Nile. I saw the band play at The Bottom Line in NYC in 1990 and have a vivid memory of crying as the band were performing their solemn ballad “Let’s Go Out Tonight.” It was silly and slightly embarrassing, but mostly, it was magical.

Formed in 1981 in Glasgow, Paul Buchanan, Robert Bell and Paul Joseph Moore released a grand total of four studio albums. While that isn’t terribly prolific, the lengthy gaps between releases have actually served to accentuate how special that tiny handful of recordings are (not to mention Buchanan’s 2012 solo album). All are full of regal, heartrendingly perfect pop hymns, but the albums that have inspired the most devotion and worship by far are the first 2; A Walk Across The Rooftops (1984) and Hats (1989). While most of the tracks on each could be characterized as “sad,” thanks to Paul Buchanan’s towering vocal performances and compassionate words there is also something profoundly hopeful living within their bones.

What The Blue Nile were doing in the ’80s bore little resemblance to what their Scottish pop peers were up to at the time. Their sound and approach was miles away from the jangling guitar bands (Aztec Camera, Lloyd Cole), earnest stadium rockers (Simple Minds, Deacon Blue) and eccentric popsters (Associates, Altered Images) that surrounded them, all of whom received more press ink and experienced greater chart success.  Despite all that, in the 21st century The Blue Nile’s musical footprint and influence looms larger than all of those (wonderful) artists put together. Take a listen to UK mega-popsters The 1975’s anthemic megahit from 2018, “Love It If We Made It,” a song that’s been streamed nearly 120 million times on Spotify alone, and you will hear clear, unmistakable echoes of The Blue Niles’s “Downtown Lights.” The inspiration they’ve drawn from the band is no secret; frontman Matty Healy considers Hats to be the best album released in the ’80s. He expounded on this thought in a 2016 interview with Vulture: “The Blue Nile are my favorite band of all time. They’re f*cking amazing. Musically, they’ve inspired me so much. There’s so much drama. It’s perfect nighttime music. It’s beautiful, romantic music with British sensibilities. The sounds on it are just amazing. And it’s called Hats! What a f*cking cool name for a record!”

And while The 1975, as well as the exceptional but now broken up Majical Cloudz, are responsible for the most overt and popular 21st century sonic nods to the sound, there are a multitude of other artists who, while they don’t sound like The Blue Nile, have expressed a true unabashed love for the band. In 2016, The Quietus blog asked esoteric folk-adventurer Devendra Banhart to pick his all-time favorite albums; the first he offered up was Hats, going so far as to call it “one of the greatest records ever made, a masterpiece.”

Despite all of this adoration, The Blue Nile have been oddly underserved in the cover department and there haven’t been a a ton of artists who’ve ventured into the catalog (hint hint). The ones that have done tend to focus on a very particular handful of songs. Yet the general scarcity and repetition hasn’t had an adverse effect on the quality of covers that do exist. Fact is, some are so transcendently lovely they would be nearly impossible to top. And with that, here are some of the best!

“I’m tired of crying on the stairs…”(insert group sigh here). “The Downtown Lights” was the first single released from 1989’s Hats, and while it only got as high as #67 in the UK Singles Chart, it is unquestionably one of the band’s signature songs; desperate and beautiful, it makes feeling lonely sound positively heroic. It served as a highlight cover on Annie Lennox’s Medusa. And while her version is superb, I wanted to shine a light on a (slightly) less often heard but arguably better take on the song. Epically inclined, occasionally polarizing UK band Keane’s live recording of the song for MSN’s Something Sessions in 2012 is absolutely exquisite, with singer Tom Chaplin delivering a vocal of true passion and grace. In an interview with The Quietus from 2013, he said “One of the greatest gifts I’ve even been given was when someone told me to check out Blue Nile. It’s extraordinary, they are such a great band. And you feel like you’re part of a little club once you get to know their music.” Chaplin regards “The Downtown Lights” as one of the greatest songs he’s ever heard, and he and his band’s love and reverence are evident in this performance.

As great as the Keane version is, lush, indie lo-fi synth maestros Small Black are also in the running for most beauteous “Downtown” cover. A highlight of their 2014 Real People EP, the band takes the “more is more” approach, adding a wash of pounding synths to the proceedings and accentuating the song’s sublime melody. Here “Downtown” takes the form of a fat, gorgeous, dance floor ready monster; it’s also perfectly suited for episodes of crying on the stairs, only this time in crowded places with spinning lights.

“Let’s Go Out Tonight” from Hats may be the grandest tearjerker in the entire Blue Nile catalog. As such it has been the recipient of several scenery chewing tributes, with Isaac Hayes’s 1995 take going furthest over the top, adding 4 additional minutes to the running time by including one of his trademark semi-salacious spoken word interludes. But as entertaining as that is, the absolute best versions of the song are the ones that keep things simple and spare. As it happens there are not 1 but 2 absolutely stellar covers that deserve attention.

I don’t have a lot of information on Lucy Davies. She posted her cover on YouTube in 2019 with a singular line of text attached;” Hey! It’s nothin’ on Mr. Buchanan! But I tried!” This is an exceptionally modest assertion, because her version is straight-up stunning.

This 2010 live take from singer-songwriter Nadia Ackerman is also an absolute treasure.

Note to the purists: In 1998, orchestrator Craig Armstrong included a version of “Let’s Go Out Tonight” on his album The Space Between Us, but had Paul Buchanan himself perform the vocal. That makes it basically half a cover, but I’d be remiss to not mention it because it’s staggeringly beautiful.

Not the renowned guitarist, but Scottish singer-songwriter extraordinaire Gary Clark, formerly of plush uber-melodic pop purveyors Danny Wilson. Clark’s 1993 excellent debut solo album Ten Short Songs About Love spawned a handful of singles, and this live cover of “Saturday Night” ended up serving as a b-side to one. There is such extraordinary warmth and love emanating from this recording, highlighted by both raucous audience participation as well as Clark’s himself; the man literally stops singing at one point to say “what a song” while he is virtuosically performing it.

While we’re here, there’s another love letter to “Saturday Night” that needs to be acknowledged. In 2018, truly exceptional Portland indie pop duo Pure Bathing Culture decided to cover the Hats album in its entirety. Vocalist Sarah Versprille explained the motivation for the project this way: “We became immediately obsessed with their world of nostalgia and longing and the way the songs were simultaneously extremely sad at times but also intensely romantic and modern. It made us feel like the music we wanted to make was validated in some way by the fact that their music had already existed in the universe.” Awash in languorous guitar (from Daniel Hindman) and featuring Death Cab for Cutie’s Ben Gibbard guest duetting with Versprille, PBC’s version of “Saturday Night” is both romantically nerdy and unerringly sweet.

Laura Donnelly- Tinseltown in the Rain (The Blue Nile cover)

The title track from The Blue Nile’s debut album, “Tinseltown in the Rain” is one of the band’s truly full-fledged pop songs, albeit a more dignified breed of that particular animal. It’s essentially a love song to Glasgow, and the instrumentation in the original (urgent keys, rubbery bass, jittery guitar) was meant to mimic the sounds of the city. Its most memorable feature is Buchanan’s over the top, eternally embraceable declaration after each chorus (“Do I love you? Yes I love you !”). On her cover, Laura Donnelly of evocative electronica band Laki Mera strips things down to just voice and dulcimer and turns “Tinseltown” into a wistful, rainy, and innately lovely ballad.

Angelically voiced Brian Kennedy had been a backing singer for Van Morrison in the late ’80s before ultimately embarking on a solo career in 1991. While “Wish Me Well” was in fact written for him by Paul Buchanan specifically for inclusion on Kennedy’s second solo album, 1996’s A Better Man, The Blue Nile ended up recording their own (killer) version which ultimately appeared as a b-side on their 1996 single of “Happiness.” “Wish Me Well” is kind of a cover in reverse, then, and an absolutely gorgeous one at that. Kennedy’s elastic voice is perfectly suited to this lament about just not being able to make it work. It’s a sad song, to be sure, but that falsetto Kennedy unleashes to close out the song is positively life-affirming.

There are only seven tracks total on Hats, and while not one of them qualifies as filler, there are a few that could ostensibly qualify as “deep cuts.” Slow motion, Tom Waits-ian style lament “From A Late Night Train” may be, as of this writing, the fifth most popular song from the album on Spotify, but it’s as heart-achingly beautiful as anything else on Hats. On her tenderly rendered cover, Beth Organ sings with a clarity and quiet power reminiscent of a latter day Kate Bush power ballad, and it’s exceedingly pretty.

Bonus cut: I met The Blue Nile not long after the release of Hats and Paul Buchanan told me that they had originally intended to call the album…Hope. Yes, maybe a little on the nose, but of course since my name is Hope (which is what prompted him to tell me) and because I was young, I told him yes, that’s totally what they should have called it. As the years have gone by, I’ve come to realize that Hats was in fact the absolute perfect name for the album and that I was 100% wrong and ridiculous in my assertion. Hats forever.

8 Responses to “Off the Beaten Path: The Blue Nile”