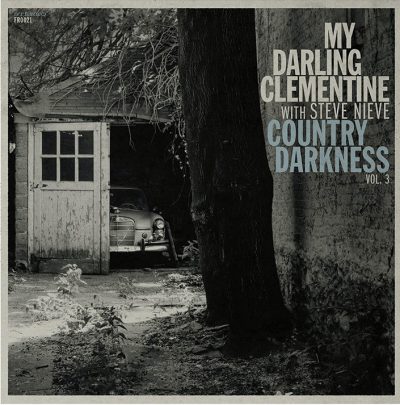 Forgive the sense of deja vu. We have indeed been here before, at different stages of fruition; this being the 3rd and final chapter of Country Darkness, hitherto a work in progress.

For those not up to speed, here we have the UK’s answer to George’n’Tammy, the married country torch singers Michael Weston King and Lou Dalgleish. Otherwise known as my Darling Clementine, they’re both big fans of Elvis Costello, and they have been spending their 2020 putting together a collection of Costello covers. To add icing to that cake, they’ve done this in conjunction with no less than Steve Nieve, right hand man and keyboard pilot for Costello since near the beginning. Released in three helpings (earlier volumes reviewed here and here), this final set is again four songs. Over the course of the year, the question has changed from whether it will be worth hearing (’twas ever thus) to whether they can keep up the momentum.

My answer: a muted yes.

First track, “I’ll Wear It Proudly,” the first of a pair from King of America, strips the anguished vinegar from the original. Instead of the searing organ, Nieve sets this as a melancholic day of reckoning, the couple trading verses over his stately piano. It seems almost a different song, and is the standout track in this selection, with Weston King again bringing the voice that Costello can only dream of.

“The Crooked Line” offers no small debt, melodically, to “Ring of Fire,” so it is no surprise it was offered (if not used) as a song for Walk the Line, the Johnny Cash film biopic. Rather than the hoedown stomp from Secret, Profane and Sugarcane, here it is a sprightly keyboard romp, the idea being to capture a Doug Sahm/Augie Meyers ambience. Maybe it doesn’t get in the hole, but at least it lands on the green. Anyway, it’s better for the lack of the whoops and hollers which mar the original.

“Indoor Fireworks” has been in the MDC repertoire for some time and was earlier a highlight of Dalgleish’s solo repertoire. As a duet, it works well enough, if flagging when compared to that solo version. Dalgleish’s voice carries the poignancy of the lyric better than does that of her husband; here he sounds a tad too assured for the song. Not to mention, it is supremely difficult to better the original.

Finally to round out the show comes “Why Can’t a Man Stand Alone,” a song from Costello’s last album with the Attractions, All This Useless Beauty. That album was a collection of songs Costello wrote with other singers in mind.  He styled”Why Can’t a Man Stand Alone” for Sam Moore (Sam and Dave), but they or someone near them turned it down. In Costello’s hands it was more than a little overwrought; Weston King and Dalgleish tone it down a bit, finding a tad more southern soul than did the author. But it all gets a bit, ironically, Bacharach, possibly deliberately, as the horns sweep in, losing any advantage thereby.

Possibly the weakest of the three EPs, there is still enough to Country Darkness Volume 3 to please the fans of both My Darling Clementine and Costello. Overall it raises a couple of points possibly earlier unrealized: Steve Nieve really can do restrained, and Dalgleish is by no means the junior partner in the relationship, no Linda to Weston King’s Paul.

Of course, it being the time of year that is, the nights drawing in toward the festive season, the three EPs will soon be thoughtfully re-released as a single disc. All twelve songs will be joined by a bonus track, “Powerless.” Inspired by Costello, they say, rather than written by him, “Powerless” could certainly be from his pen: lovingly overworded, pulling together loose fragments and distant memories from many of his songs, creating very much the mood of the man. It’s a nice way to close the project, which, collectively, packs a more lasting punch when all found in one place.