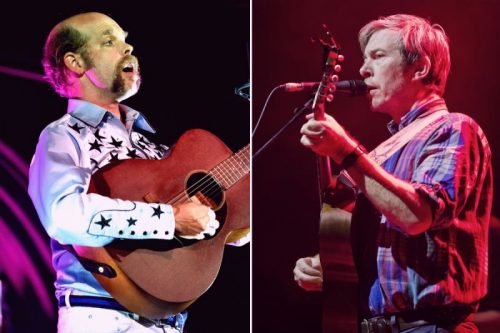 Bill Callahan and Bonnie “Prince” Billy’s Will Oldham have been covering songs together for years, dating back to a 1994 EP where, as Smog (Callahan) and Palace Music (Oldham), they tackled Leonard Cohen’s “Tonight Will Be Fine.” Now they’re continuing the collaboration on a pair of new covers – not officially announced as the start of a covers album or anything, but one wonders…

First, accompanied by their Drag City Records compatriot Azita, the paid tackled Cat Stevens’ 1967 song “Blackness of the Night,” which Stevens has called one of his first protest songs. Then, they covered Hank Williams Jr.’s “OD’d in Denver,” accompanied by Matt Sweeney. About the latter cover, Sweeney wrote:

One of the many beautiful things about the original ‘OD’d In Denver’ is the contrast between Hank Williams Junior’s effortless carefree vocal and the song’s bleak desperate words. So I thought I’d ‘chop it up’ and make the song’s music ‘line up’ with its lyrics by having minor key guitars percolate and arpeggiate, and singing an equally paranoid ‘guide melody’. Then Greg Sweeney laced in his drum and percussion elements at his studio in Hoboken. Hank’s version’s narrator thinks he’s gotten over his night in Denver- I wanted this WillBilly track to feel like we’re catching our singer deep in the fear spiral

Listen to both below, and keep your fingers crossed there’s more to come.