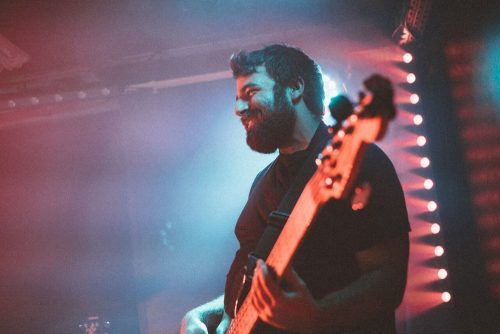 “I Want You Back” was the Jackson 5‘s first #1 hit and arguably remains the biggest song of their career. The high-energy soul pop song is considered by some to be one of the best pop songs in history, and has been sampled at least 85 times. It’s such a well known song that it’s hard to imagine a cover which lets you rethink it.

B.E.N. aka Bass Every Night aka Benjamin Ryan Williams is an Altanta-based bassist who plays instrumental music using a full band of overdubbed bass guitar parts, a little bit like some of the solo work of legendary bassist Stuart Hamm. We first came across him when he recorded an entire album of out-there Blink 182 covers.

For the first 30 seconds or so, you probably won’t recognize “I Want You Back” in his new cover. B.E.N. slows down the tempo and begins only with the rhythm guitar part (though it is played on a bass). The iconic bass line doesn’t begin until 30 seconds in, and that’s when it becomes apparent what you’re listening to. B.E.N. adds a lead part to take Michael’s vocal, and he plays the vocal melody a little like a jazz musician might, adding subtle changes here and there. At about 2:55 he gets more inventive with the lead part, with a fill that really departs from the vocals.

The result is an uplifting but still very chill interpretation of the song – more suitable for lazing on your deck at sunset or, yes, listening to in your bedroom, than singing along with in your car.