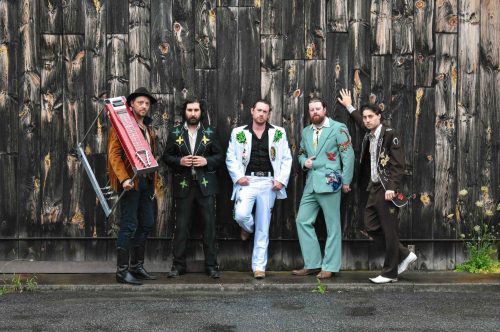 If you’re a county band named after aliens, you almost have to cover Billy Lee Riley’s “Flying Saucers Rock ‘n’ Roll,” the high point of the extremely niche alien-country genre. And on their new album Back in the Saddle of a Fever Dream, Vermont’s Western Terrestrials do just that. It’s a high-energy version that retains the spirit of the original but injects a side of punk energy, like a cover Jason and the Scorchers might have done.

Western Terrestrials’ frontman Nick Charyk told us how it came about:

When we recorded [our previous album] Clearlake Conspiracy, we still hadn’t settled on a band name. We were trying to find something that played off our outsider/weird/Vermont status in the country world and Nashville. We landed on aliens being kind of the ultimate outsiders, and Western Terrestrials as a name and vision blossomed from there. “Flying Saucer Rock n Roll” was the first tune we worked up after deciding on Western Terrestrials.

My dad had a new wave/punk band called the Debutantes, based out of Rhode Island in the early ’80s. They did a version of the song, which I heard on tapes when I was a little kid and loved. There was a really cool rockabilly revival scene out of DC in that era, which is where my dad grew up. I got heavy into his record collection as a teenager, and found Robert Gordon, and two of my favorite guitar players Danny Gatton and Roy Buchanon, both out of DC. Danny Gatton did an amazing couple of records with Robert Gordon too, and some killer live versions of “Flying Saucer Rock n Roll.”