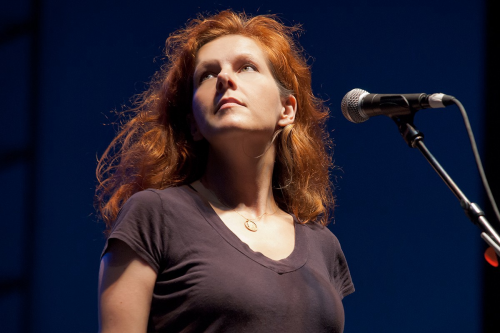 Powerhouse singer and songwriter Neko Case turns the big Five-Oh today. Case has never been an artist to deny or put a spin on who she is, so well-intentioned remarks like “50 is the new 30” might not fly. We’ll keep it simple with a loving “Happy Birthday, Neko!”

What kind of artist is Neko Case, exactly? She can be hard to locate, and that’s probably by design: her lyrics famously tend to veil more than they reveal, and she regularly re-writes her own career script as if to defy labeling and categorization.

Case first made waves as a drummer in the Vancouver, B.C. punk scene, circa 1996. She quickly evolved into an alt-country crooner, and earned international acclaim with that turn. Her next incarnation veered away from country, though she kept the pedal steel guitar in the mix. She was onto a more indie singer-songwriter path. Art-rocker might be more accurate, considering her penchant for unwieldy album titles, fractured song structures, and out-there sonic experimentation (for the closing track of her Middle Cyclone album, Case offered 31 minutes of frog noise).

Case has a way of uniting opposites. On the one hand she has been fiercely independent; for a time she ran her own label, “Lady Pilot,” and to this day she retains all the rights to her songs. But she’s also been a particularly dedicated collaborator and team-player. Consider her work with the New Pornographers (there’s eight albums worth—pretty good for a side gig), or listen to her project with k.d. Lang and Laura Veirs (you’ll find it under “case/lang/veirs”). Contradictions surface even in the preferred pronouns presented in Case’s Twitter bio: “She/Sir.”

The contradictions (or let’s say multiple facets) are there in her original music, and evident in her covers: she’s at ease taking on the great soul and jazz divas like Aretha Franklin and Sarah Vaughan, but she’s equally game to redo Bob Dylan, Tom Waits, and Neil Young. She’ll offer her slant on Queen right along with honky-tonkers like Loretta Lynn and Hank Williams. Case’s trademark voice recalibrates any song she covers, convincing you she could have written it herself.

Let’s enjoy a few cases in point, along with a couple of Neko’s best originals as covered by others.

Case’s take on an early Aretha Franklin number appeared on her Blacklisted album from 2002. This live show predates the album by a couple years. If you know the studio recording, this performance is an eye-opener: she belts it out with even more energy and conviction. The show took place almost exactly 20 years ago in a small sweaty club in Seattle. Case had called Seattle home until the year before the show (she moved to Chicago, which seemed to her more supportive of the arts). You sense the crowd was more than glad to welcome her back.

“Misfire,” from Queen’s glam-rocking third album Sheer Heart Attack, gets a rockabilly treatment on Case’s first solo outing, The Virginian. “Misfire” was the first song ever written by Queen’s bassist, John Deacon. It’s ironic that “Misfire” is missing a notable bass line–Deacon made up for this later with bass-driven hits like “Another One Bites the Dust” and “Under Pressure.” Case sings her parts in straight-ahead fashion, but it’s still an electric performance. The guest singer on this track has a hard time holding his own against Case–the only misfire on an otherwise spirited rendition.

Here’s Case in a gentle and dreamy mood, with minimal (but tasty) support from her band. Live on Austin City Limits, they revamp Dylan’s blues-folk love song from Blood on the Tracks, and they do it well.

When these two high school musicians in Ontario teamed up to record Neko’s “Star Witness,” it was as a protest of sorts against their high school’s closure. Case’s song from 2006 seems an unlikely choice for the occasion (it’s not in any way a protest song, for one thing), but we sure are thankful it came to mind: this cover is an absolute gem. Whether or not the student performance had any impact on their school’s situation, it evidently had an impact on Case: she reposted it on Facebook, and deservedly so. Both Kate and Janelle have voices that can express tenderness and strength, and each has her own distinct style. The spare accompaniment gives space for their voices, and when they blend vocals the song reaches a whole new level of magic. Pretty much a perfect rendition.

We’ll call this a cover of Neko Case, because it is, but Neko was covering Ketty Lester’s 1964 version of “Look For Me,” and Lester in turn was reworking Sarah Vaughan’s 1963 original. This rendering from Emily (and Ben) Baker breaks the continuity with its complete transformation of the song. The cello and violin arrangement is barely unrecognizable as “Look For Me,” except that the singing is very true to the original. Baker preserves the melody, but overhauls the foundation, investing the remodel with Eastern European folk influences–Klezmer or Romani traditions, perhaps. But it’s hardly strictly classical or European, either–its American roots are showing.

Points for style and instrumental prowess, sure, but the highest marks are for creativity and imagination on this one.