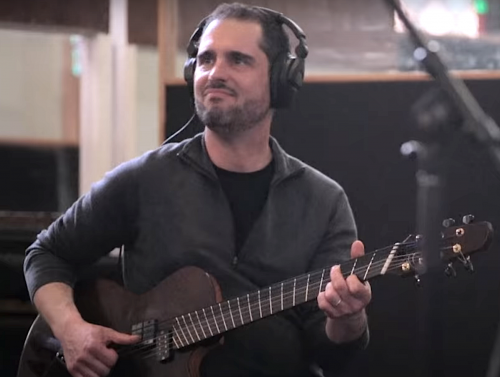 When I first saw the guitarist Charlie Hunter, it was accidental. I was only interested in seeing the sax player and the drummer—two legends—not the guitarist playing with them. If I’d never heard of him, how good could he be? Hunter was in mid-solo when I walked in. Within seconds I was sold—loved the scalding tone, the unhurried feel, the unexpected chords. Then the music shifted gears and the bass line grabbed my attention. I turned to check out the bassist–but no bassist stood on stage. It took some time to figure it out: the bass player was also Charlie Hunter.

On closer inspection, Hunter wasn’t playing a 6-string, but a 7- or 8-string beast—the “extras” were bass strings. The song’s latin-jazz groove pulsed from the bottom set of strings, the leads and melodies spidered out from the top few strings. On top of that Hunter was clearly improvising all of it, working out the bones of the song blow-by-blow with the drummer. The sax player I came to hear stepped up to solo, but by then I was mostly there to see Charlie Hunter.

Though Hunter considers himself a folk musician, and others argue he’s a funk musician, you’ll find he’s mostly classed as a jazz musician. (A podcast host once introduced Hunter as a “groove dog,” and that’s as a good a label as any for his style of music.) Unlike most jazz guitarists of his generation, Hunter studiously avoided jazz studies programs. Skipping school, he left his Bay Area home at the age of 18 to busk his way around Europe–on-the-job training, he calls it. While living in Paris and playing on the streets and Métro stations, Hunter jammed with musicians from the West Indies and Western Africa. These encounters seemed to clinch his obsession with polyrhythm and percussion.

When Hunter returned to the Bay Area, he joined his old friend Michael Franti in The Disposable Heroes of Hiphoprisy. The prestigious Blue Note label signed him as a solo artist and bandleader (part of the label’s reinvention of itself in the ’90s). From that point on he’s been recording his own music and relentlessly touring. Over the decades Hunter has switched between solo, duo, trio, quartet, and quintet configurations depending on economic conditions. Sometimes a vocalist is on board, but not often. It’s been something of a grueling existence, judging by album titles like Not Falling Behind is the New Getting Ahead and Gentlemen, I Neglected to Inform You You Will Not Be Getting Paid. His Instagram bio modestly offers this: “Driver of tour van with occasional guitar playing.”

Luckily, he’s always had the knack for landing side projects that help to raise his profile and pay for van maintenance. Hunter contributed to D’Angelo’s Voodoo album, and not just as bass/guitar player: he earned some co-writing credits on that platinum-seller. Another co-write is with John Mayer, a Hunter fan since high school. (Mayer even hired a film crew to document his session with Hunter and drummer Steve Jordan.) When Norah Jones was still an unsigned unknown, Hunter was among the first established artists that she paired with. She was one of the singers he nabbed when he finally decided to include vocal tracks on his albums. This was a year before her debut album came out.

If Hunter’s music is to your liking, his Instagram feed is worth a follow (particular the IGTV discussions about music history and music as a business). A project in the works is a tribute to Charlie Patton, the pre-War II blues guitarist–not to miss if you like your blues with a twist of funk!

Lucinda Williams rocketed this Randy Weeks song to wider acclaim with her rendition on Car Wheels on a Gravel Road. Even if you know the song, you’d have trouble recognizing it here until vocalist Lucy Woodward dives in. When she’s not on the mic, Hunter and percussionist Keita Ogawa seem intent on a tense, noirish feel; Hunter doesn’t even hint at melody. It’s all about negative space and restraint.

Hunter somehow manages to hook up with the best players in the drumming business: the amazing Keita Ogawa is Snarky Puppy’s percussion/drummer. The only disappointment with Ogawa here is that he doesn’t play the pigs. No, really, those pigs in the foreground—the porkestra—are worth hearing.

Charlie Hunter Trio–Come As You Are (Nirvana cover)

Hunter shared a bill with Nirvana at the height of the band’s fame. He went on to record “Come As You Are” for his first Blue Note release in 1995, Bing, Bing, Bing! This may well be the first legit jazz album with a grunge cover; it’s unlikely that many in the jazz crowd or the alt rock crowd loved it.

The trio are performing this within a year of Cobain’s death. Never mind that the guitarist has to correct the show host on a couple of points (Hunter’s side-eye is priceless): other than that, the band’s slant on the second single off Nevermind comes off nicely.

I have to think it’s the Howlin’ Wolf version of this Willie Dixon piece that Hunter is referencing here. While people tend to think of “Spoonful” as a vehicle for instrumental soloing (thanks to Cream), this version is all about the vocals. The late great Theryl De Clouet sounds like he is being double-tracked, but that’s not what’s going on. The man is singing two tones at a time. It’s a little bit Tuvan, a little bit New Orleans. To check out more of his work, look into his old band, Galactic.

I was always happy enough with George Thorogood’s amped-up cover of this Hank Williams classic. But I don’t think Hunter owes a thing to Thorogood here–the mood is too laid back. The chill vibe is actually a nice twist on the song. They don’t feel a need to stretch it into surprising new shapes, either. Hunter and ace drummer Scott Amendola roll through a fairly straight-ahead instrumental take. There’s a slinky bass line, greasy soloing, and a spacious feeling over all.

It’s not reggae, just reggae-inspired. Hunter claims he got a lot of disrespect from the jazz world when he released his Bob Marley tribute album, Natty Dread. But more importantly to Hunter, Toots and the Maytals had the album on rotation on their tour bus, so it’s all good. We had to include this track as nod to the recent passing of Toots Hibbert. (And for the sweet, sweet snippet of “Tennessee Waltz” that opens the track.)