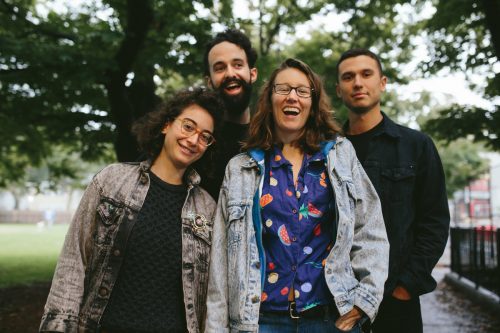 “All Star” is both Smash Mouth’s most famous and most notorious song, featured in not one but two feature films (Mystery Men and Shrek) and subject of endless memes. The song’s restlessness positivity – despite the somewhat downbeat lyrics of the verses – has proved easy to mock, as has lead singer Steve Harwell’s distinct and unconventional voice. Still, it was a massive hit when it came out and it has become a radio staple in the subsequent decades.

Future teens are an indie pop band from Boston with a penchant for covers, releasing a covers album in 2018. Their vibe is a lot more mopey than Smash Mouth; they describe themselves as “bummer pop.” And they have covered the most unlikely of songs: “All Star.”

Their cover opens with co-lead singer Daniel Radin almost a cappella, with only the occasional tinkling of a piano. As the song builds, there is a distinct Counting Crows vibe, with the vocal melody altered to fit the vibe. Amy Hoffman, the other lead singer, takes over for the second verse, giving the song more of an emo/’00s indie pop vibe. Instead of the (in)famous whistle break, the band jam, which solidifies the ’00s indie rock sound. For the third verse most of the instrumentation breaks away, only to come back to build slowly to a brief climax complete with emo screaming before the final chorus’s grand finale.

The result ends up something like an indie or emo power ballad. It, needless to say, a complete re-imagining of the song. Listen below.