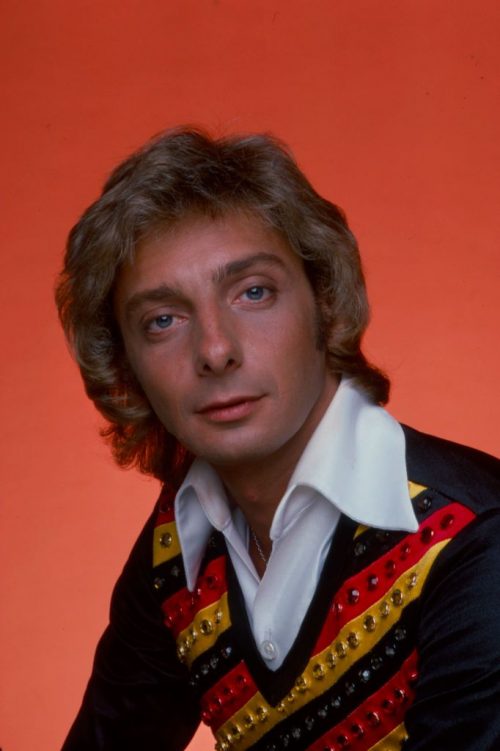 Entire table gasps in joyful recognition…all except one girl aka me.

All at table agree, he is gorgeous…except one girl who remains silent (me again).

Rapturous Barry conversation continues until lunch ends. I am befuddled and say nothing.

Oh, I’d seen the show, but I thought Barry was schmaltzy and goofy, the antithesis of a rock star. Paul McCartney was so much cooler. What were they seeing that I wasn’t?

In 1973 when the former Bell Records was taken over by Clive Davis and renamed Arista, one of its inherited residual assets was a singer and songwriter by the name of Barry Manilow. At that point, Barry had released one album through Bell, which had neither charted nor spawned any hit singles. But Davis knew he had something and was impressed with both Barry’s voice and stage presence. And though Barry had proven from that first album he could write quality songs, Davis decided to intervene in order to hasten getting his new charge’s career off the ground. Thus began the urgent search to find the ideal song, the guaranteed hit that would do it.

Of course, as he was an actual songwriter, Barry was not too crazy about this idea since he, naturally, wanted to perform his own stuff. But Davis reasoned that he shouldn’t limit himself to only doing his own songs, reminded him that songwriting wasn’t his only gift, that he was also a great singer and entertainer and they needed song vehicles to exploit those qualities to the max, no matter who wrote them. The song Davis ultimately offered to Barry was written and originally performed by an American songwriter-producer with aspirations of being the next Cat Stevens named Scott English. It had been a #12 hit the UK in 1971 and it was called “Brandy.”

Co-written by Scott English and Richard Kerr (who went on collaborate extensively w/Barry) in 1971, “Brandy” was not, as had been initially reported in the press, about a dog, but was in fact about English’s fear of leaving his wife. In a 2018 interview with Music Week, English expounded on its origins saying, “I eventually did leave her, but I wrote it beforehand. Everyone loves the ‘You kiss me and stop me from shaking’ line. My first wife did kiss me and stop me from shaking. She took me off the streets, you know, and gave me a home. I guess I was ungrateful or bored, I don’t know. I sing about my father in there, too – the ‘man through a window,’ that’s my father.”

English recorded the song and initially watched with elation as it not only climbed both the UK and Australian charts, but also scored him some prestigious TV appearances, including a spot on Top Of The Pops. But all this wasn’t enough to ensure lasting success as a performer. As English wistfully recollected later, “I was flavor of the month for about 8 weeks…then just as fast as it started, the whole episode stopped…and I was just me again.”

The original version of “Brandy” is three minutes of gaudy, grandiose strings, booming backing singers, and flamboyant vocalizing from English, each element battling it out for ultimate ownership of the song. It is also oddly, oozingly charming, maybe never more so than within this particular TV appearance. In it, English serves up a performance is equal parts oily and sincere in an absolutely kick-ass canary yellow suit and, truth be told, kinda tears it up on that last chorus. Chew that scenery, baby.

But while that was it for Scott English as “pop star,” it was only the first step in “Brandy”‘s ascent to the top of the pop universe. As was the custom in those days, in 1972 another singer decided to take a crack at the song, New Zealander Bunny Walters. Walters’s sweet and faithful version got as high as #4 in the charts of his home country, further cementing “Brandy’s” status as an unstoppable, almost guaranteed hit.

Alas, all these efforts to create the definitive version the song were in vain, for as Aretha Franklin hijacked “Respect” from Otis Redding, so too did Barry Manilow, in 1974, steal “Brandy” from Scott (and Bunny) forever.

Not that he wanted to. Both Barry and his soon-to-be-longterm songwriting partner Marty Panzer hated “Brandy” on principle because, of course, it wasn’t their creation. But Clive Davis made the rules and he heard something in it. So Barry did as he was told and set to recording it, first working it out as a ballad to get familiar with its structure, then recording it with a rhythm section mimicking the tempo of the original. Unfortunately, when Davis heard the recording, he was not impressed, declaring it as “all wrong” then driving the point home with an “I hate it.” This response flustered Barry, and all he could think to say was that he’d also attempted it as a ballad, at which point he spontaneously sat down at the piano to demonstrate as a means of defense. Davis was blown away by the slowed-down take and responded with an emphatic “that’s it.”

Beyond the arrangement, there were some additional adjustments made to “Brandy” before she was launched into the world, including the removal of a couple of lines (“Riding on a country bus, no one even noticed us”) and the alteration of the actual title from “Brandy” to “Mandy” so as to avoid confusion with the #1 hit from 1972 by Looking Glass, “Brandy (You’re A Fine Girl).”

While the arrangement on Barry’s version is resolutely gorgeous, with its delicate piano intro and cleverly graduated orchestration, the real star here is his vocal. Making its journey from warm, world-weary, and regretful to what can only be described as melodic histrionic, it’s what lifts this version into a completely different stratosphere, light years away from the others. Though Barry has said consistently throughout his career that “I don’t sing so well,” he does. Really, really well. Fact is, Scott didn’t really stand a chance, yellow suit excepted, for while he may have originated “Brandy,” Barry freakin’ sold it… to the girls, then the world. He turned a jaunty pop curio into a widescreen sentimental tearjerker of the highest order. That was “Mandy,” Barry Manilow’s first hit…and first # 1 song,

And what did Scott English ultimately think of Barry’s version with its alterations ? “When Barry asked me what I thought of his version I told him, ‘I don’t like it, but the more you buy me houses I’ll love it’ [laughs],” said English in 2018. “What was stopping me from enjoying it at first? It wasn’t mine. I wanted it to be me, this guy was getting all the glory. It’s my story, and Barry Manilow was singing it. Of course, over time I let that go. Barry brought a real symphonic sense to it.”

While other artists regarded as kitschy or so uncool they’re cool in their time have found critical favor over the years, like The Carpenters and Lionel Richie, Barry remains something of a punchline. But here’s the thing: Barry was always in on the joke.

In an interview with Rolling Stone back in 1990, he happily throws himself under the bus in regards to his handful of ’70s TV specials. “Have you ever seen those? Come on — this is an idiot on television! This is just a jerk. But I thought this was the way I was supposed to be: campy, giggly, charming, cute, silly, entertaining, goofy. By the fourth special, I was convinced I was a sex symbol. Oh, boy, this was Manilow Run Amuck! It’s very, very difficult when you’ve got millions of people applauding you and girls screaming nonstop. You say, ‘Well, maybe I should wear tight pants.’ But I’m telling you now — I shouldn’t! I ain’t got it. I look at them and I cringe.”

But as cringeworthy as it seemed to him, it worked some kind of magic on everyone else. As for me, after that day in the school lunchroom, it began to feel like Barry Manilow was everywhere, all over both radio and TV and on every magazine cover. On top of that, my schoolmates never stopped talking about him, and so many lengthy, endlessly unspooling conversations discussing Barry’s virtues ensued as well.

I fought until I could no longer resist the sonic charm of Barry, but I vowed only to purchase Manilow singles and not albums because I wasn’t like a fan, okay, I was too cool. But ultimately Barry wore me down, and once his Even Now album was released, I completely caved, and it soon lodged itself firmly both onto my turntable and into my heart. I had to come to terms and accept that I too loved Barry. “Mandy” had been the wake-up call for millions of people… and, much to my surprise, for me.