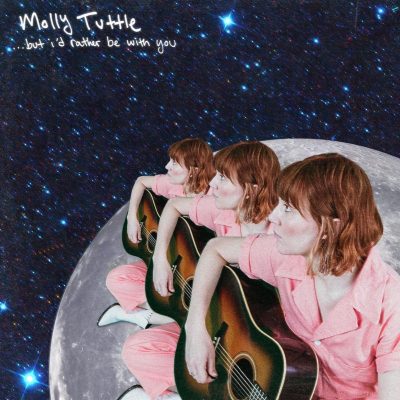 Now, with the bio thus far, is …but i’d rather be with you going to be a litany of country standards and bluegrass staples? Fear not, anything but. Tuttle’s inspirations range widely among artists as diverse as Rancid and FKA Twigs, embracing also the Rolling Stones, Harry Styles(!) and the National. The only nod to her received tradition comes from songbook of Karen Dalton, herself a far from typical Nashville denizen. As an incentive, it is also entirely safe for the banjo averse.

…but i’d rather be with you kicks off with Cincinnati favorites, the National. “Fake Empire” might sound or seem impossible to transcribe from piano to guitar, the time signature surely impossible to reconcile. Deceptively simple in melody, the original is carried by Matt Berninger’s lugubrious vocal, further upping the ante, even if discounting the driving drum pattern as it builds to a polysonorous climax. But Tuttle nails it, multitracking herself over a bed of her guitar, cello (I think), and some drones of electric guitar and effects. Round one to Tuttle.

She admits to little knowledge of Mick, Keef and the boys, that being no barrier to her giving “She’s a Rainbow” a lively kicking, which, if not world-changing, ought to get her a radio play or two, demonstrating her nifty picking in a glorious instrumental bridge. But if the Stones are her dad’s generation, Arthur Russell is surely in her demographic. Tuttle transforms one of the late disco cellist’s quieter and more stately moments, finding the tune and beauty in “A Little Lost” right under our noses, the setting a delight, a string quartet swooping around her guitar, voice and the addition of drums, absent in the original. Stunning.

Karen Dalton operated on the fringes of the industry, a little too much spit’n’gravel – soul, even – in her voice for the folk-blues territory she covered. Now she’s seen as a fore-runner of Lucinda Williams. Tuttle can’t help but sweeten “Something on Your Mind,” such is the timbre of her voice, and if that points any listener toward the source, so the worth of the exercise. FKA Twigs’ “Mirrored Heart,” however, shows this reviewer’s age, having to take a first listen of the original, ahead of, again, like the Russell song, appreciating Tuttle’s alchemy. Fans of Ms. Twigs will probably loathe this dilution of intent, but I think it lovely.

Rancid, FFS? Disclaimer alert, I could never stomach the faux Clash-lite of these California copyists, but then again, I wasn’t raised in San Fran during their heyday. Tuttle was. The quiet 1,2,3,4 intro apart, it doesn’t quite work, sounding too Eagles/Linda Ronstadty for these ears, which surely wasn’t something Messrs Armstrong et al would ever expect to hear their work described as. First false step, but given that it took until track 6 to see any slight stumble, let’s give her a pass. It will likely sell oodles as a single, so what do I know.

I misread the next track as “Walking On the Moon,” which would have been quite something, but it is “Standing on the Moon” and it is the Dead (one from her Dad’s collection, I’ll bet, though she plays that down in the sleeve notes). Tuttle takes a generic and graceful Garcia/Hunter ballad and strikes further gold with it, some steel sneaking sinuously about her fairly straight rendition. With a song this good, there is little needed, she knowing just how little to add or subtract, the later entry of a keyboard attaching additional ethereality. Somewhere in San Francisco indeed.

Beloved of the 16-year-old Tuttle, “Zero” by Yeah Yeah Yeahs, suggests a whole different potential direction available, had she wanted edgy over eloquent, her image and that of Karen O now seeming to have little crossover. But apparently this is a song her band have performed as a live cover for some time. It says comfort break to me. And sticking outside my comfort zone, Harry Styles, despite the good reviews, is still, to me, an annoying talent show boy-bander. So can she open my ears? “Sunflower, No. 6” starts nice enough, but the song remains insufficiently strong to catch my soul. Then I listened to the original, and I can’t feeling she has worked a small miracle…….

I was a young teen when Cat Stevens’ “How Can I Tell You” came out, a song that routinely had me in tears, despite having no-one even to tell, so how Tuttle did this was always going to be a test case. She associates it with not saying goodbye to her dog before that final trip to the vet, which had me smiling. This is another where she embellishes little beyond a defter hand on the guitar and a little wobble toward warble, the string arrangement even a mirror of the original. Some dust even found a way into my eye. A fine closer.

…but i’d rather be with you is altogether a successful and satisfactory album, melding the old and the newer material to both interest the old and the new listener–or, more to the point, the older and younger listener. In the UK, artists in this field are doomed perpetually to be younger than their audience. I’m uncertain as to whether the same is true in her homeland (I hope not), but I wonder if this choice of songs will help attract some younger blood to the genre. Me, I’m off to listen to Rancid’s Greatest Hits with ears anew.

…but i’d rather be with you Tracklisting:

Learn more about Molly Tuttle on her webpage.