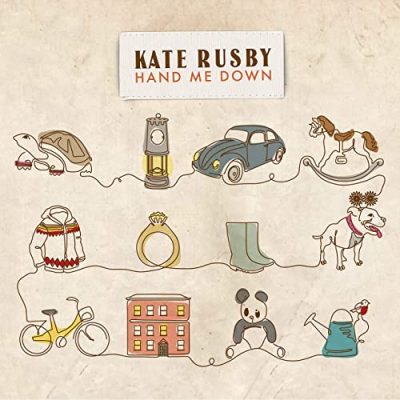 Kate Rusby has one of the purest and most distinctive of voices that grace the UK folk circuit, and has been one of the most successful, her career stretching back over three-plus decades. Firmly associated with the trad. arr. firmament, her voice, with acoustic guitar, fiddles, and squeezeboxes reaping the songs of old England, she also writes material that can fit into that style seamlessly. An unmistakably Yorkshire presence, her accent unadorned by any need to adopt the faux-ploughboy (or -girl) many folkies seem to adopt, her whole persona seems inhabited by the tradition. There are no messages, she has no soapbox–just the singing.

This has perhaps led to some accusations of tweeness, the dizzy corkscrew blonde and her delightfully dorky dialogue between songs. This and a tendency to produce a yearly Christmas record that might seem all sentiment and saccharine. In fact, this belies a sound business sense: Kate Rusby is a cottage industry, literally, if quite a grand one, which incorporates a studio and her own label, all functions from management and booking to roadie provided from within her family. She knows her audience and, yes, the idea of a record chock full of Yorkshire Christmas carols might sound anathema to many, go listen. (Maybe not all of them in one sitting.) She has both the pipes and the assured sincerity to quell such cynicism. Indeed, I have tried, and failed, to dismiss her as lightweight over the years, each time drawn back by her un-selfconscious authenticity.

Cover versions of modern songs have actually always been part of her repertoire: early records included songs by Iris Dement and Richard Thompson, neither of whom are necessarily far removed from folk themselves. But gradually she has snuck in songs from writers occupying different territories, covering even Oasis in her last release. That song, “Don’t Go Away,” had come about for a radio session, the challenge being to do something completely different. Come lockdown, she decided this was the time to revisit a shortlist of songs she had made for that radio appearance. She had both her studio and her adept multi-instrumentalist husband available (that would be Flook-member and bandmate Damien O’Kane), and so she was off. With a canny decision to drip feed the content, tasters came early with videos of “Manic Monday” and of “Friday I’m in Love.” Together with a refusal to release the rest of the track listing, such was their quality that otherwise blind pre-orders probably paid for the rest. Denied a preview stream, it is only with last week’s release of Hand Me Down that I can fully assess the investment that, yes, of course, I too made.

Hand Me Down opens with “Manic Monday,” this excises entirely any sense of mania, being all wistful recollection, the song benefitting from that approach, a delightful concoction of swirling instrumentation, acoustic and electronic, with, as the video reveals, her pre-teen daughters supplying background vocals behind her trademark inflections. Having children singing should never work, but, reader, it does.

The Coldplay song “Everglow” follows, a relatively simple Chris Martin and piano showpiece in their hands. By the simple switch to guitar, strangely and surprisingly, for a first time I get the Coldplay template, the immediacy of the song now somehow diluted. It’s a nice enough rendition, but.

Is “Days” too ubiquitous? While the song’s been covered by everyone and their dog, it is the Kirsty MacColl version that defines this cover, which Rusby freely admits. It is only in the instrumental middle section that it gains any real life of its own. If tasteful is a veiled putdown, Rusby’s take on Lyle Lovett’s “If I Had a Boat” strays dangerously close. I’m needing more attack here, striving to find positives, her voice and the backing insufficient to fight off a sense of torpor.

Luckily, a swerve into the unexpected manages to lift the mood. If I remember the TV show “The Littlest Hobo,” I had certainly forgotten the theme song. A simple enough country canter, with O’Kane’s banjo making a midway entrance, it had me smiling. With another song unknown to follow, “The Show,” written by playwright Willy Russell for one of his productions, with him being also a family friend. Possibly closest to the style of Rusby’s earlier records, nothing but her voice and acoustic, this is a joy.

Taylor Swift now appears, or her song anyway, maybe betraying a choice made by Rusby’s young daughters. Stripped back to a gentle banjo chug, politeness suggests the strength of the original might all be in the production. We are then back to the over-covered; I wonder if the world really needs yet another “True Colors.” And that is all this is, another version, adding nothing.

Proving again that simplicity is a proof of the adage that less is more, this is just voice, guitar and the unobtrusive banjo. “Carolina on My Mind,” as with so many James Taylor songs, translates well to a female voice, better still to one of this calibre. Another high point, then followed by another change in dynamic. If nothing else, this has taught me Paul Young actually (co-)wrote “Love of the Common People,” my assumption being always it to have been some ancient civil rights anthem. A polite swagger through is all that is offered here, possibly more fun in a live setting. (I fear I here find that T word, twee, leaping back, however hard I try….)

The second taster, the one that had me order Hand Me Down, now near-bookends the project, a yearning version of Cure perennial, “Friday I’m in Love.” I confess to always thinking the original a poor rewrite of “Friday on My Mind,” like so many Cure covers, it takes a different mood and different speed to wring out the inherent beauty of the song. This is one of the best and I would probably use it as sufficient rationale to invest in the whole album.

Marley’s “Three Little Birds” is the actual closer, and to echo the lyric, as a whole, “every little thing gonna be alright.” Played straight and without any reggae slant, it is good enough, following “Friday I’m in Love” sufficiently well to make me feel harsh on some of my earlier expressed opinions. (So expertly placed!)

Which is, really, the problem. Hand Me Down isn’t so much bad as unnecessary. It holds at least two worthy additions to classic cover territory, and two or three versions that can hold their head up. The rest seem indulgent and lack luster. Part of the issue may be the cohesiveness, or lack of, therein. Taken separately and out of context, I dare say the weaker songs would stand up better, the procession of one after another dragging this listener down more often than up. A great EP lies hidden within its whole. I imagine, however, that this won’t matter a jot. I am sure Hand Me Down will be sold in sufficiently sizable numbers to keep the business afloat, maybe appealing more to those who have all Rusby’s Christmas albums than to those who were caught ablaze by her early work.

Here’s the video that matters.

Buy Hand Me Down at Pure Records.

5 Responses to “Review: Kate Rusby, ‘Hand Me Down’”