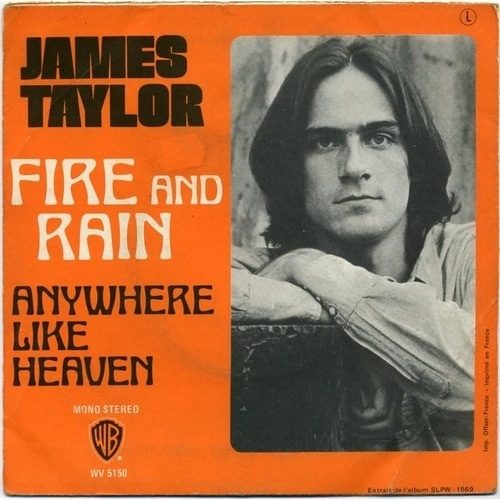 James Taylor’s “Fire and Rain” is a perverse oddball of a song. On the one hand, it’s a comfortable, welcoming armchair, resoundingly easy on the ears with its sweet acoustic picking, memorable melody, and mellifluous vocal. On the other, it’s a harrowing tale of despair, loss and confusion with no real resolution. “Fire and Rain ” got as high as #3 on the Billboard pop chart in 1970, and though it didn’t hit the top spot, its success helped open the door for a veritable flood of like-minded soul-baring singer-songwriters, from Jackson Browne to Jim Croce and beyond.

The story behind “Fire and Rain” is a pretty well-trod one at this point. Each verse describes a particular period of Taylor’s late-’60s life story. The first verse addresses the suicide of an old friend, Susie Schnerr (referred to as “Suzanne” in the lyric), as does the last line of the chorus; “but I always thought that I’d see you again.” The second verse describes James’s own addiction to heroin. The third alludes to his time in a psychiatric hospital while being treated for depression; it includes a reference to the implosion of his band Flying Machine (which has frequently been misinterpreted as a reference to an actual plane crash).

The song’s dark lyrical content did nothing to deter floods of artists from every conceivable genre from covering it, regardless of whether or not it was in their specific sonic wheelhouse. This meant for every undeniably cool version of the song (ex.The Isley Brothers), there was a schmaltzy, MOR Vegas-style take to counter it from an old school crooner like Jack Jones or Andy Williams.

Part of the reason for that has to do with a weird phenomenon that doesn’t really exist anymore. Back in the ’70s, the primary ways to hear the latest pop music were by watching TV variety shows, hanging out at the record store, or by tuning into the most powerful pop music purveyor of them all, the AM radio. With a limited number of places and airtime hours available to hear the latest pop music, people were generally exposed to a very specific bunch of songs at a time, as determined by whoever was programming all the aforementioned outlets. This meant that both younger and older generations were often acquainted with the same hits. In other words, the pop Top 40 consisted of songs everybody knew, regardless of their age, ethnicity, or gender (a mad phenomenon we shall never ever know again). This inevitably resulted in some existential and horrifying musical dilemmas wherein you and your parents (or even worse, your grandparents) could potentially end up liking the same song.

This phenomenon manifested itself in the scariest pop music way possible, meaning crooners like those mentioned above were often inspired to record gentler versions of the current pop hits for their own older audiences. But like a skintight pair of plaid bell-bottoms, old school Vegas-supper club style singer plus current pop hit generally made for a bad combination. We can only speculate as to what renowned ’70s bigot and easy listening vocalist Anita Bryant thought “Fire and Rain” was about when she covered it in 1971, though guessing its mention of Jesus and fire held some allure, original context be damned (or “darned” in Bryant’s case). There’s a good chance she would have been horrified at James’s explanation about the reference in a 1972 Rolling Stone interview:

Jesus was just something that you say when you’re in pain. I wasn’t actually looking to the savior. Some people look at it as a confirmation of belief in Christ as the one true path and the one sole way, which I don’t believe in, although he can certainly be a useful vehicle.

After listening to literally hundreds of versions of “Fire and Rain” (and withstanding the innumerable easy listening takes), it was hard not to notice a small but pointed lyrical adjustment in the versions performed by women in the ’70s and ’80s. There was a reflexive tendency to replace the name “Suzanne” with something neutral, some examples being “and all,” or “seems like,” and the particularly egregious “my man.” There is nothing overtly sexual about “Fire and Rain,” and when this weak bit of artistic license is employed, it tends to dull the impact of the song. Changing the words to “Fire and Rain” completely misses the point, for at its core, all “Fire and Rain” is saying is I miss you, I need help, times are tough, but I’m still here. It’s that simple.

Now that we’ve gotten through all that craziness, let us offer up some blessedly fine covers of “Fire and Rain.” The coolest thing about these versions that follow is how these particular artists put their own personal spin on the song and still managed to convey its low and lonely sentiment so powerfully. One last thing: though this feature is called Five Good Covers, there are so many versions of “Fire and Rain” I couldn’t help running past the finish line.

Meet the finest cover of “Fire and Rain” ever recorded. We’ve written about the Isley Brothers 1971 version of “Fire and Rain” before, but facts are facts: it can never be lauded enough. The song begins with a haunting, almost funereal intro, with a line from the as-yet-unheard chorus being eerily chanted in the background as Ronald Isley’s haunted voice echoes over the top. Things churn ominously for an entire minute and a half, and then BOOM, like a train suddenly emerging from a dark tunnel into bright daylight, Ronald belts out “I always thought!” and the song is revealed in its familiar form. It’s an absolutely stunning cover, and it comes damn near close to eclipsing the original.

Who the hell is John Wesley Ryles, you ask? Well, from 1969-79 he released five albums and landed seven singles in the Billboard Country Top 20. His biggest hit came in 1977 with “Once In A Lifetime Thing,” an of-its-time piece of countrified pop candy that reached #5 in the chart. But though he was by most measures somewhat successful (and a very active session musician since the ’80s), Ryles is still something of an obscurity.

Let’s be clear, though: his 1971 cover of “Fire and Rain” is no cheap kitschy throwaway novelty. It’s earnest, dignified, and incredibly reminiscent of that wondrous late-’60s Glen Campbell sound. In the Ryles version, there literally are no empty spaces. The drumming is so ostentatious that the song might as well be credited to John Wesley Ryles and Drums. Whether in the form of a quick roll or a hi-hat tap, they are amusingly, wonderfully, in-your-face present. The countrypolitan stylings are further accentuated by some highway harmonica and of-their-time, polite, respectful gospel-ish backing vocals. This is the most “fun” version of “Fire and Rain” you are ever going to hear, and it’s a winner.

Marcia Hines is originally from Massachusetts, but after successfully auditioning for a production of the musical Hair being staged in Australia in her mid-teens, she ended up relocating there. She ultimately scored a recording contract and grew to become one of the most revered and beloved artists in her adopted home country, racking up numerous hits and even hosting her own TV series in the late ’70s.  Hines’s 1975 cover of “Fire and Rain” is regal and oh-so-lovely with Hines’s offering a vocal that somehow manages to sound both delicately honeyed and gigantic at the same time. Unsurprisingly, this version landed her in the Australian Top 20. Stick around ’til the end to hear how Hines totally tears it up in that coda, because damn.

British singer Birdy burst onto the scene in 2011, when at age 14 (!) she hit in the UK charts with her spare and elegant cover of Bon Iver’s “Skinny Love.” Her debut album that same year featured a number of eclectic cover choices, including songs by The National and Phoenix. It was also home to this heartfelt version of “Fire and Rain.” Birdy’s vocal conveys a real emotional fragility belying her age at the time she recorded it, which makes for a poignant listen (not to mention that she plays a particularly attractive piano line throughout). To this day she says she loves the song and with that in mind offered up a pretty exquisite quarantine version that is also worth checking out.

P!nk covers songs like a hardcore fan, always sounding like whatever song she happens to be singing at a given moment is her all-time favorite thing ever. There is something about her delivery and the way she appears to give over to a chosen song that makes her performances exceptionally convincing. Case in point: this live version of “Fire and Rain” from 2013. If you closed your eyes and hit play on the video above, you’d have no idea she was gripping a cheat sheet with the lyrics on it. She doesn’t sound remotely hesitant, awkward, or unfamiliar with the song, and she just totally 100% crushes it. And we’d be remiss if we didn’t acknowledge the fine picking from her accompanist, guitarist Justin Derrick.

Sammi Smith is most famous for her 1971 Country #1 (and Kris Kristofferson-penned) “Help Me Make it Through the Night.” She was a rebel with the kind of backstory custom built for a biopic: singing in clubs by age 12, divorced with 3 kids by age 23, befriended by Johnny Cash who helped get her signed to Columbia and a sometime collaborator with her close friends Waylon Jennings and Willie Nelson (and as such, a true Outlaw). And oh yeah, damn could she sing, with an evocative vocal style that sat somewhere between the resolutely fabulous Dottie West and Bobbie Gentry. While Smith does edit out the name Suzanne in her 1971 version of “Fire and Rain” she still captures the heartache at the root of the song, thanks to her beautifully world weary, drawl of a voice. Her cover is the aural embodiment of a rainy day, featuring sweet “Wichita Lineman” style strings and the subtlest of pedal steel. What makes this recording so fine is Smith’s sorrowful vocal. And I’d be remiss not to acknowledge that fabulous bit of bonus wailing Smith kicks out at the end of the song, which is all kinds of perfect.