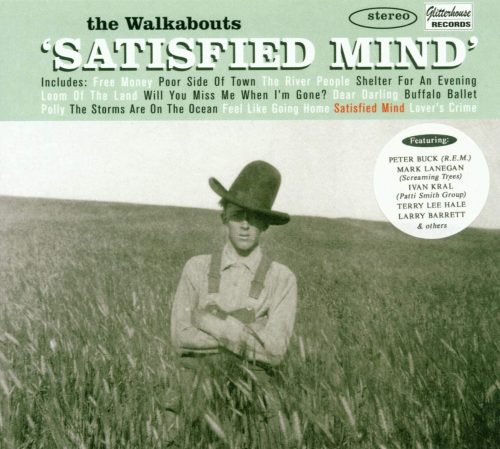 I never understood why the Walkabouts were never huge. A consummate Americana noir sound, two terrific vocalists in Chris Eckman and Carla Torgerson, an arthouse European ambiance… how did it not happen? Their history and geography ought really have defined a career in grunge, and their Seattle base and the Sub Pop label often had them sometimes lumped in with that movement. But they were always, even at the start, a step apart and a dust bowl away.

And if grunge, for all its worth, was in your face and shouting, this band seemed, well, just too literate. Too knowing. If their sounds were often the sounds of an Arizona dog day afternoon, the lyrics and moods evoked were more nighttime shades and Sartre, pavement cafes in Paris and Greek island Tavernas. Drawn to Europe and with the audiences there drawn to them, they spent a lot of road time away from the U.S., building up contacts and a fan base. With a doomy sound of keyboard swirls and steely whines, exemplified by 1994’s Setting the Woods on Fire, the band also gave good cover. Unsurprisingly drawn to wordsmith auteurs, they apply their studied murk to Dylan, Neil Young, Townes Van Zandt and Tom Waits, segueing well into their degree-level basement bar band vibe.

Satisfied Mind came out the year before Setting the Woods on Fire, and was the Walkabouts’ first full album of other people’s songs. Largely drawn from the vaults of country music, songs from other traditions are also included, Welshman John Cale and Aussie Nick Cave grabbing a royalty apiece. (Indeed, the band went the whole further step on their second covers recording, The Train Leaves at Eight, in being largely songs from non-anglophone continental Europe, songs originally in Greek, Portuguese, and French. No wonder their home audience was bemused.)

With some of its songs known and others barely, the overall mood of Satisfied Mind is somber and majestic. Vocals are shared between the dusky baritones of Eckman and the starker grandeur of Torgerson, who has a touch of Lucinda Williams about her, if after a tonsillectomy and elocution lessons.  Effective apart, when coming to together it is a desolately efficient pairing. The musicianship of Glenn Slater on keyboards is the main musical glue, with the steady rudder of Michael Wells and Terri Moeller, bass and drums respectively, keeping all in check. A shout out also for Wells’ harmonica, an integral part of the atmosphere, akin to Mickey Raphael’s work with Willie Nelson.

A slew of friends are also here alongside to assist, notably Ivan Kral’s guitar and Peter Buck, proving he can actually play more than one sequence on  mandolin. Plus the keening steel of Andrew Hare, who would later also grace Setting the Woods on Fire. O, and on the penultimate track, similar Seattle square peg Mark Lanegan on, what else, lead vocal.

It is to the cornfield of the sleeve art we first head for the title track, a lament from the pen of Jack Rhodes, and probably well-known from the array of those who have tackled it before, everybody from Ella Fitzgerald to John Martyn, the Byrds and Bob Dylan, Cashes Johnny and Roseanne, let alone those here mentioned already, Lucinda and Willie. I know the song and have many of the versions mentioned, but this one stands alone, initially unrecognized, never played straighter and never performed better.

If Eckman takes his claim on “Satisfied Mind,” Torgerson effortlessly reminds of her importance on a saloon bar shuffle through Nick Cave’s “Loom of the Land.” If Cave’s version is carried by less is more, this rendition demonstrates more is more still. Another Australian song follows, ushered in by that lonesome harmonica, before lurching up a gear altogether, up and away from erstwhile Go-Between Robert Forster’s somewhat janglier statement. With a maudlin take on Gene Clark’s “Polly” next, there is a rise towards an overdose of misery, however artfully done, needing a bit of a lift. Sadly, John Cale’s “Buffalo Ballet” doesn’t give that, the only fully missed step and the first song here that’s better as it was first written. The mood remains a little flat, a little generic, over the next couple of tracks, no matter how much instrumental whizz is thrown at them.

Emmylou Harris is evoked in Mary Margaret O’Hara’s “Dear Darling,” and is competent enough, so thank the lord for a funereal “Poor Side of Town,” which eradicates the ’60s schmaltz of the original for perhaps how Gram might have done it, the Emmylou reference aflame again, or maybe even a slight hint of Richard and Linda Thompson as they tackled “Dark End of the Street.”

Guess which song Ivan Kral gets on and you’d be right, his having played on Patti Smith’s original. But his place here is within a completely different sounding song, his boss’s “Free Money” transported from a Bowery lament to an Austin aspiration, working well in the context, with an implied menace absent from the original.

Two nigh-traditional songs bookend the renewed grasp on the project. First, a sublime exposition of the Carter Family staple “The Storms are on the Ocean.” Torgerson’s voice is a harbinger of shipwrecks, loss and worse. What an ideal place to bring in Mark Lanegan.

The longest song on the album, Charlie Rich’s “Feel Like Going Home” is worked up here in an arrangement reminiscent of Percy Sledge and “When a Man Loves a Woman,” if without his exhilaratingly over-egged vocal. Torgerson leads, Eckman following and, however good they are elsewhere on this record, so far so hmmm. Suddenly all becomes clear: after a brief keyboard glissando, bang, here’s Mark, all grit and gravel, the drums kicking in with a celebratory flourish. Thereafter the three carry the song together, sensing, no, knowing the hoped-for homecoming to be inevitable, aided no little by a scorching display of guitar (Eckman’s, presumably) as it glides triumphantly into the fade.

After that, the palate cleanser (because that’s what it is) “Will You Miss Me When I’ve Gone” is merely that, albeit one that will undoubtedly beg the answer, to the song, the band and the record, in the affirmative.