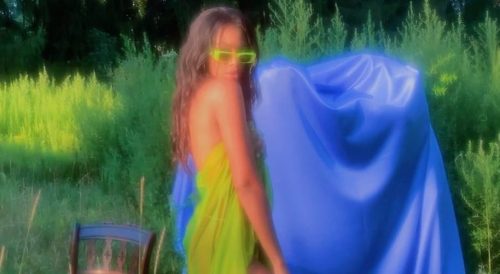 Back in April, Amber Mark launched a covers series cleverly called Covered-19 with a terrific cover of Nirvana’s “Heart-Shaped Box.” Well, it started as a covers series; she soon expanded Covered-19 into releasing all sorts of material. Covers did return in June with a version of Eddie Kendricks of the Temptations’ “My People.” And now, she wraps up the Covered-19 with a third and final cover. And the source material couldn’t be much more different than Nirvana and Kendricks. It’s Sisqo’s ubiquitous-in-1999 hit “Thong Song.”

Yes, lol I covered Thong Song😋 I HAD TO DO IT! I used to love this back in the day. So I figured how cool would it be to make a smooth house version of it. It originally started out as a little joke to myself and then I loved it too much not to put it out. The video was shot on an iPhone with my sister 📹@chloerosebdo so please excuse the DIY-NESS! I hope you enjoy this little end of summer bop. I just had fun with it and I hope you do too!

Watch Mark’s “Thong Song” video below (borderline NSFW, as there’s a lot of you-know-what), as well as the two previous covers installments of Covered-19.

Click here to see our admittedly not super extensive archive of Sisqo covers.