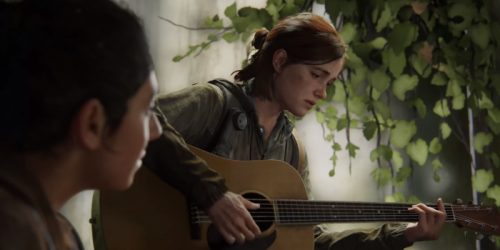 There are few songs more quintessentially ‘80s than A-Ha’s “Take On Me.” From the iconic synth-driven keyboard riff to the then-groundbreaking animated video, everything about it is reminiscent of that decade. In the years since it was an MTV staple, it has been covered by ska bands, punk bands, bluegrass outfits, folkies and even the likes of Weezer and Metallica. The song rejoined the animated world when it was included in the recent release of the video game The Last of Us Part II, the sequel to one of the most beloved games of the 2010s about a post-apocalyptic world ravaged by disease and zombies.

Within the new edition, voice actress Ashley Johnson (who once played Chrissy Seaver on Growing Pains) performs a quiet, emotionally-charged acoustic cover of the song. It’s a professionally recorded cover meant to emulate a campfire song. The animation and sound editing are so detailed that it captures the scratches as the character Ellie slides her fingers up and down the neck of the acoustic guitar.

After hearing the song, Ellie’s companion, Dina, says, “You should have kissed me then,” apparently referring to a moment when Ellie had previously performed the track. We couldn’t agree more. The two then set out into the unknown together.

Click here to listen to some more covers of “Take On Me.”