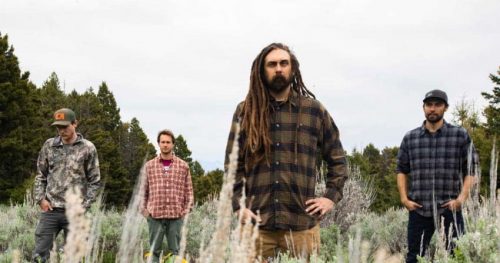 “Pigs” is one of the three epic-length tracks from Pink Floyd’s mammoth Animals, an unauthorized reinterpretation of George Orwell’s Animal Farm as three prog suites (book-ended by two unrelated love song fragments for reasons only Roger Waters knows). Instead of Floyd’s animals representing archetypes in the USSR, the animals in this version represent archetypes in western capitalism. Animals is one of those Pink Floyd albums you discover later in your fandom, because there are basically no short songs – it’s an album that hardcore Floyd fans end up insisting is a favourite, but it usually takes time to get there.

Kitchen Dwellers are a bluegrass band already known for their cover EPs – in 2018 they released an EP of covers of The Band called Reheated Vol. 1. For volume two, they’re tackling Pink Floyd, giving them the full Hayseed Dixie treatment, minus the wink – and the fiddle.

Aside from the fact it is played on nearly entirely acoustic instruments, he cover is pretty straightforward. Banjo substitutes for the iconic keyboard opening and bass, guitar and mandolin fill in the other instruments. (No pig noises on this version.) The only time the band strays is when someone tries to mimick David Gilmour’s talkbox. Where things really take off is in the final jam, with the Kitchen Dwellers fully leaning into their bluegrass sound and taking the song a little out of the “Pigs” but acoustic! comfort zone.

It’s an impressive feat of musicianship that shows you don’t need a studio and tons of overdubs to do Pink Floyd justice.

Want more? Check out our list of the 40 best Pink Floyd Covers Ever!