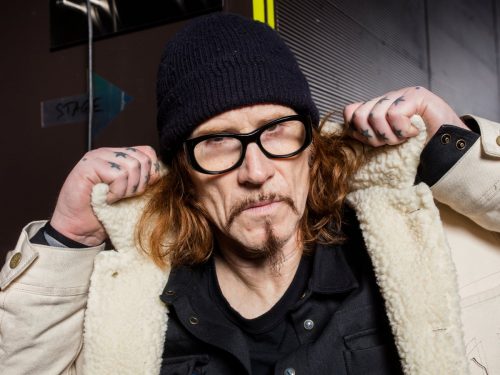 But, once heard, that voice sticks. Memorably once described as being like a three-day stubble, it imprints, demanding both attention and immersion. And if the directions take you outa your usual safety genres, too bad; you go, you follow, opening new vistas on the way. Oh, and if you haven’t yet discovered Mark Lanegan, what are you waiting for?

This has been a momentous year for Lanegan and could, no doubt, have been better without one certain virus. His memoir Sing Backwards and Weep dropped just as C-19 was shutting us all down. The record Straight Songs of Sorrow accompanied the book; it was his twelfth solo output since 1990. No cozy bedside read, the autobiography covers the bleak and messy road on which he paid his dues (mainly to barmen and drug dealers, it would seem), routinely dodging death as many of those about him didn’t. No celebration of the squalor, the celebration is his escape and the circumstances of it, making him still one of the most unlikely looking sunbeams in this world, all tattoos and implied menace.

Lanegan is perpetually touring, and a frequent visitor to the UK; I have caught him a number of times, and his shows are always, and aptly, revelatory. I will relish the belated Sorrows tour when it comes, but I have little doubt the downtime is being spent productively, given his myriad allegiances and dalliances. His website has been exhaustively overhauled and is adding new material by the day, playlists and long lost gems, all sorts.

So where to start? Even discounting his two solo cover albums, there is a wealth of material scattered across any of his formal band memberships and more still in ad hoc arrangements.

From Lanegan’s first solo release in 1990, and, whilst Cobain was already a member of Nirvana, this was ahead of their breakthrough. And was certainly well ahead of the same song appearing as a regular in the Nirvana setlist. Both musicians, good friends, were huge fans of Leadbelly, with a projected joint project covering his songs eventually being nixed. This song ended up on Lanegan’s debut, three others emerging later on the Nirvana b-sides collection With the Lights Out. If Cobain’s voice is gritty, Lanegan’s is pure gravel. Leadbelly, aka Huddie Ledbetter, was a posthumously celebrated folk and blues player, with a string of jail sentences littering his career. What possible inspiration could Lanegan and Cobain seek there?

An almost uncharacteristically sweet rendition, a croonier side of the man seldom seen. Indeed, on blind hearing it would be a wrench to believe it could even be him, even with that hint of familiarity to the voice, aided and abetted by the gentle swell of the organ. You can almost imagine him sharing a stage and the song with Emmylou Harris, such is the conventionality of the no less glorious performance. This is from his first set of covers, I’ll Take Care of You. Other songs included Brook Benton’s title track and Fred Neil’s “Badi-Da.”

From his second set of covers, Imitations, otherwise a look back to the songs he grew up with, this Nick Cave song fits in seamlessly alongside fare like “Mack the Knife” and “Solitaire.” The jazz-lite orchestral setting proves Lanegan has the vocal chops to tackle any style, even suggesting him to be a little wasted within the conventional stricture of drums and guitars. Cave is a long time colleague, one who pops up in the book, by the way. He and Lanegan also appear in the trilogy of Jeffrey Lee Pierce tribute records, which, in any other piece, would stake him an automatic claim to appear here.

A surprisingly jaunty vibe infects this old Hank staple, not remotely how Hank done it, coming over all Roger Miller/King of the Road, with Campbell’s kitten cat vocals, here at an odd counterpoint to Lanegan’s subterranean tones that lead the song. And who’s whistling, I wonder? For such a prolific writer, Lanegan took a back seat during the three recordings he made with Campbell, she writing virtually everything they sang, he there for his gruffness alone.

So soporifically paced as to make you wonder quite what this Cafe had available, this floats and shimmers through on a haze, just on the right side of suffocation. Graceful in the hands of Tim Buckley, who wrote it, rather than the sense of reminiscence in the original, this feels like the hookah is still bubbling. From a largely overlooked mostly British tribute to Buckley, Sing a Song For You: a Tribute to Tim Buckley, this features many of the individuals within and behind the This Mortal Coil project.

The Twilight Singers – Live With Me (Massive Attack cover)

The original of “Live With Me,” not least the accompanying video, is so daunting that any idea of a cover seems superfluous. But Lanegan so wreaks the wrack in his voice, he ekes out a pathos even stronger than Terry Callier’s bravura showing in the original. Perhaps the sound gave the idea for the Soulsavers later use of Lanegan for their projects, the mood of somber gravitas broadly at the same level. At the risk of losing the moment, and casting back again to the distressing video made for Massive Attack, one feels that, back in the day, the now-sober Lanegan wouldn’t bat an eyelid with that display of drinking. Twilight Singers is/was a further link up between Lanegan and Greg Dulli (Afghan Whigs), Dulli’s baby with others dipping in an out, as opposed to their more formal Gutter Twins incarnation.

Another Nick Cave link, this coming from a Cave/Warren Ellis soundtrack for the 2012 movie Lawless. To enable this a band, the Bootleggers, came together with an array of guest vocalists, with appearances also from Willie Nelson and Emmylou Harris. Lanegan and the band transform the Velvet Underground classic into a more appropriately Wild West setting. It doesn’t make that much use of his voice, but it sounds a lot of fun. (For a real treat, chase out the reprise of the song, with the late great Ralph Stanley, something else again.)

Never heard of them? Me neither, but a little research throws up they each have a record of working with Dave Gahan on his solo work away from Depeche Mode, as his rhythm section. This “Cat People” cover is a one-off single in support of the American Liver Association, and again is very reminiscent of the Soulsavers, with the production, if anything, having even more kitchen sink. Gahan joined Lanegan for the second and third Soulsavers pieces, ultimately virtually taking over for the fourth and attaching his name to the fifth. This song demonstrates, to me at least, why Lanegan is the stronger singer, Gahan near-disappearing alongside him. As to the song, I feel it overall offers more to the Giorgio Moroder-produced film version than to Bowie’s Let’s Dance reworking.

Well, he’s actually done this one twice, there being also an earlier Gutter Brothers slow thrash through it, which doesn’t hold together so well, the guitar sound having especially dated. This newer endeavor just bleeds with a gaunt and shell-shocked emotion, a bereft matter of fact that carries the mood of the lyrics with aplomb. I remember watching American Gods, the box set from which it comes, with a couple of other Lanegan appearances featuring, finding the soundtrack more lasting than the plot.

All of this and no reference to his appearance on tributes to acts as diverse as the Kinks, Pink Floyd, Tim Hardin, and Junior Kimbrough. Or guesting with any number of seemingly unrelated artists: Nicole Atkins, UNKLE, Tinariwen and Slash, to name a few. Let alone the prodigious output under his own name or of his eponymous band. I was uncertain whether this article was supposed to be Under the Radar or In the Spotlight. Under many spotlights and a full blown guerrilla infiltration might be more like it.

4 Responses to “In the Spotlight: Mark Lanegan”