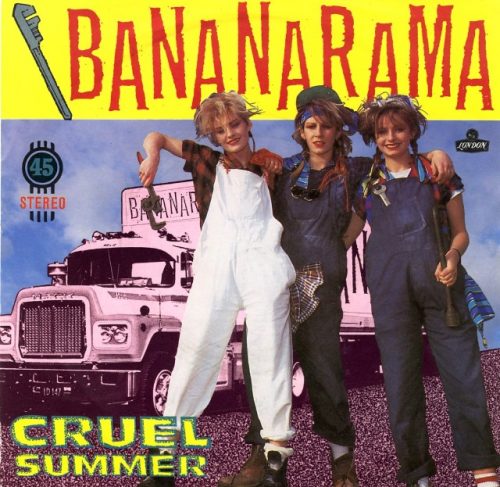 Since Bananarama first released “Cruel Summer” in June 1983, the sunny season has become substantially crueller, certainly if the raft of recent covers of the song are considered. The post-punk British girl group originated a song to stand alongside such classics as “Sealed with a Kiss” and “The Boys of Summer” when they sang of loneliness, separation, and heartache in relation to the vacation period, but they did so in a way that incorporated a strong element of, well, fun. Good, bouncy, innocent fun. Current artists seem unable to approach it in quite the same manner.

Sara Dallin, Siobhan Fahey, and Keren Woodward had made a name for themselves as fun-loving, carefree rebels by the time they came to record “Cruel Summer.” They’d developed a distinctive image of big, messed-up hair, pedal pushers, striped sweaters, braces, and monkey boots. They’d also notched up four insanely catchy top-ten hits in the UK that included “Shy Boy,” “Na Na Hey Hey Kiss Him Goodbye,” and the Fun Boy Three collaborations, “It Ain’t What You Do (It’s the Way That You Do It),” and “Really Saying Something.” These they injected with girl group sass and their own brand of jubilant, unpolished harmonies, which helped make them regulars on premier UK music show Top of the Pops, and cover stars for teen magazines across the land: Look-In, Number One, Smash Hits. All this while being a major stylistic influence on a fledgling Madonna, then on the verge of releasing her self-titled debut album.

As on “Shy Boy,” their only original hit to date, Bananarama co-wrote “Cruel Summer” with the production team of Jolley and Swain. However, it was a far cry from wanting to make the shy boy “my boy” and “squeeze and hold him tight.” Without one “shoop shoop aaahh” to speak of, the group worked on darker and more paranoid lyrics about the “pavements burning,” the air being “heavy and dry,” and “strange voices” saying things they “can’t understand.” These centered on the idea of being isolated from a loved one in an oppressively hot city, and made for a downbeat chorus: “It’s a cruel, cruel summer / Leaving me here on my own / It’s a cruel, cruel summer / Now you’re gone.” But while the songwriting quintet matched the words to a string of minor chords, they retained the trademark Bananarama perkiness by means of a marimba hook, some funky synth bass, plenty of percussive crashes, and a good helping of Nile Rodgers-style electric guitar. Result: tune!

The Bananarama girls put plenty of fun into the accompanying video, too, where we see them skipping, dancing, and generally gallivanting around New York in lipstick and dungarees on a hot day, intermittently making out that they are car mechanics. Such antics no doubt contributed to the song reaching #8 in the UK Singles Chart at the end of July ’83, where it rubbed shoulders with a bona fide summer anthem, Wham!’s “Club Tropicana.” It was only when it later found an audience in the States, in fact, that it was recognized as being really rather depressing beneath the feelgood veneer. This began when it featured prominently in The Karate Kid movie of 1984, which opened, suitably enough, in the month of June and became the fifth highest grossing motion picture of the year.

“Cruel Summer” was used effectively in the hit movie as the backdrop to New Jersey outsider Daniel LaRusso (Ralph Macchio) cycling to his new school in Reseda in Los Angeles and anxiously observing a gang of bullies plotting against him. “Strange voices are saying (What do they say?)…” The gang are part of the Cobra Kai karate school, with blackbelt Johnny Lawrence the leader. So cue some major problems for Daniel-san, and a new entry into the US Billboard Hot 100 for Sara, Siobhan, and Keren on July 21, 1984. The trio looked on in wonder as their song climbed steadily to #9 in the chart at the end of September, where it perched between Bruce Springsteen’s “Cover Me” and Sheila E.’s “The Glamorous Life.” Its international popularity soared, it became an iconic song of the ’80s, and a healthy cross section of US artists subsequently lined up to record a cover of it.

Of these covers, Hailey Tuck did a good job.

Kari Kimmel did it better.

Evanescence did it best.

So let’s ignore (please) the thumping Eurodisco version by Ace of Base in 1998, and head straight to the Hailey Tuck rendition of 2018. The Texan jazz-pop singer had developed her singing skills in the jazz clubs of the Voltaire district of Paris, specializing in the Great American Songbook. Yet, with the aid of legendary Joni Mitchell producer Larry Klein on her 2018 debut album Junk, she also applied her retro stylings to the likes of Paul McCartney (“Junk”), Pulp (“Underwear”), and, most transformatively, late-period Leonard Cohen (“That Don’t Make it Junk”). Additionally, on her Tuck and Cover EP the same year, she set the precedent of radically changing the style of “Cruel Summer” by making it slow and moody, in a way that makes total sense.

There’s no suggestion of marimbas here. Nothing to skip to. It’s just Hailey with her dreamy, intimate voice layered over the top of tinkling piano and light percussion, as whispery backing vocals drift in and out of perception. It’s a hauntingly effective rendition as a result, which draws out the loneliness at the heart of song. It also puts the listener into the kind of daze that only comes from being emotionally fragile on a really hot day. So beware.

US singer Kari Kimmel also took a radical approach to “Cruel Summer” in 2019, but one that resulted in something not only moody, but also daze-shatteringly dramatic. With a voice by now familiar from countless TV shows and commercials, she recorded the Bananarama hit for the finale of season 2 of Cobra Kai, a TV reboot of The Karate Kid. The song is used here to connect the story of Daniel in 1984 to the action of 2018, in which his rivalry with Johnny Lawrence has reached another critical point after the reopening of the infamous Cobra Kai karate school. It’s featured over a montage of Daniel engaged in serious battle with his personal demons, following a tragedy involving his student. It’s intense, man!

The Kimmel track is very much in the vein of Lorde’s cover of Tears for Fears’ “Everybody Wants to Rule the World” in The Hunger Games: Catching Fire (2013). It has that same portentous quality that is meant to encapsulate, in a sexy way, the big themes of moral choice, loyalty, honor, good versus evil, and regret. And it works. The breathy opening lines are blended with an icy synth sound that creates an air of tension, before the chorus assaults you with its juddering string section. Furthermore, at just two minutes, there’s a tightness to the verses, no instrumental break, no needless repetition of the chorus, no slightly ropey lyric about how the heat has “got right out of hand,” and no slack. It hits hard.

US goth-rock band Evanescence (two of them, anyway) brought a new level of somber conviction to “Cruel Summer” on June 4, 2020, via an acoustic live stream for Metal Hammer Germany. They joined the long line of artists banging out quarantine covers from their home in their attempt to articulate the fears and frustrations of self-isolation as a consequence of the coronavirus pandemic. Known for full-throttle, melodramatic mega-hits such as “Bring Me to Life,” and “My Immortal,” Amy Lee (vocals and piano) and Troy McLawhorn (guitar) laid down a stark and emotional version of the Bananarama hit to convey the new layers of meaning that it now had. They therefore spoke to the sequestered masses, cut off from family and friends, in a way that was not only empathetic, relevant, and in tune, but also – and here’s the thing – musically brilliant.

The gold for best cover of “Cruel Summer” therefore goes to Evanescence. Amy and Troy, while rejecting the fun factor of Bananarama, have made it a song for our times. It’s deeply moving for anyone troubled by isolation to hear Amy lament in her powerful and beautiful voice: “It’s a cruel, cruel, cruel summer / Now you’re gone / And you’re not the only one.” It’s furthermore a glorious arrangement, with Amy’s piano interweaving perfectly with Troy’s guitar lines, before the added thrill of that marimba hook – now a piano hook – making an appearance in the instrumental break. The undoubtedly cruel summer of 2020 is summed up well in this rendition. And aren’t those green curtains in Amy’s studio excellent?