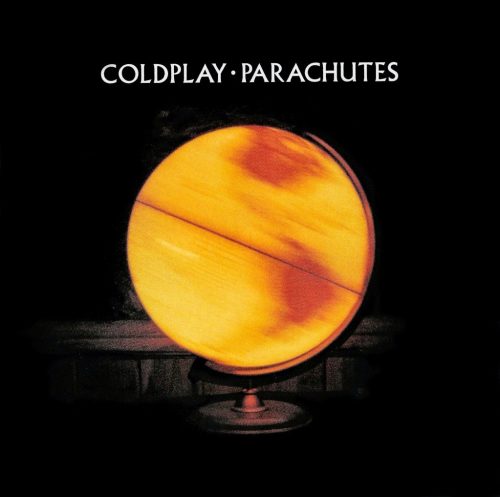 Band members Chris Martin (vocals and piano), Jonny Buckland (guitar), Guy Berryman (bass), and Will Champion (drums) met at college and started a band in 1996 (plus their original manager, Phil Harvey, is often considered the fifth member of the band). They settled on the name Coldplay (other names like Pectoralz and Starfish don’t have quite the same ring to them) and released two EPs before embarking on their first full-length album. Parachutes was released twenty years ago on July 10, 2000. Time sure flies!

Since 2000, Coldplay has grown in popularity and has used their growing platform for advocacy. The band donates 10% of their profits to a variety of charities, and they aren’t afraid to get political. For example, their latest album touches on big issues like racism and gun violence. The environment has also been an important topic to the band (as we’ll see in some of this album’s music videos). At the end of 2019, Coldplay announced that they would not tour until they could create a carbon-neutral concert. They have made exceptions for charity events, though; in January 2020 they performed a concert as a fundraiser for Reform LA Jails, which advocates for prison reform and alternatives to incarceration.

But before they were an international success, touring the world (including on the fifth-highest-grossing tour of all time, their A Head Full of Dreams tour), there was Parachutes. Let’s listen to covers of all of the tracks that started it all.

Like it opens Coldplay’s debut full album, “Beloved Abe” also opens the movie Garden State, whose soundtrack holds other gems like Frou Frou’s “Let Go” (which bookends the movie). Despite lauding the beautiful world, this song has an air of sadness about it. After all, the music video shows this world being torn apart by disasters, foreshadowing the band’s later climate change activism. This version is even more melancholic with lighter instrumentation and vocals that almost break with emotion. Barely there acoustic guitar makes lines like “all of us are done for” even more pointed. Want more? Here’s another emotional rollercoaster of a cover.

“Run River North” was the first single released in the UK (it followed “Yellow” in the US). It’s about unrequited love, and there has been much speculation as to who Chris Martin wrote it about. This version evokes the same feeling of longing, but with less of the instrumental accoutrements. The addition of string accompaniment in particular adds to the yearning. The cover lacks the guitar line in the chorus; instead, an actual chorus chimes in to back the main vocals. This somehow makes the song feel less forlorn as other lonely hearts join in.

Whether you take the lyrics literally or interpret them as a metaphor, you can imagine this song as part of the soundtrack to life on the run. An ominous high hat gives you something to tap your foot to as you hear the tale of living life as a spy. The song treated as a duet adds a bit of drama, while this more sparse folk-like interpretation brings a more small-town, nosiness to mind. The lighter touch of the piano combined with the deep strings mirror the two voices intertwining.

Perhaps Kristina Train was told to sing one she knew for the I Give It A Year soundtrack (no stranger to covers). Her sultry voice fits this slow burn of a song perfectly. The soothing tone remains and is emphasized with less assertive guitar strums. Instead, a muffled tambourine marks the beat. Despite the lower tones of most of the song, Train doesn’t have to switch to falsetto to reach the higher notes, unlike Martin in the original. A chorus of background vocals joins her to help “sing it out,” rounding out the end of the song.

And then there was “Yellow.” This is probably one of Coldplay’s most popular songs, and it certainly gave them the breakthrough they needed to win popularity outside of the UK. Plenty have covered this song, but this one sticks out as a real classic. We’ve even written about it before, but it is too good not to include in this post. Bareilles makes the song her own, unafraid to change up the melody just a bit. With only the barest minimum of piano notes, she turns her cover into something beautiful and full of feeling. She builds in intensity without adding frills, sticking to the simplicity that shows her power and mastery over another’s song.

“Trouble” was Parachutes‘ third single. It didn’t chart well in the US, but it was the second song from the album to reach the top ten on the UK Singles chart. The music video was another statement piece; the US version even won an MTV Video Music Award for Best Art Direction. Originally a piano-forward song, this cover adds electronic-chill elements. Despite this change in overall style, the mood remains the same, and the production doesn’t overwhelm the cover. The woodwind trill sound is the most aggressive one, but it is used sparingly. The initial “oh no” sounds a bit playful, but as the song goes on, sincerity builds.

Less than a minute long, the song Parachutes is named after provides an interlude before we reach the deeper cuts of this album. This cover stays true to the pairing of delicate guitar and rich vocals. “Parachutes” could easily be continued, the beginning premise of the song leaving plenty of room to expand. This cover ends rather abruptly just as you expect another verse to come, but listen on. Tillman rounds out her set by launching into a bonus cover of “Don’t Panic.”

“High Speed” was produced by Chris Allison and is the only track on Parachutes to be produced by someone other than the band and Ken Nelson. It does not provide a jarring break from the rest of the album, although it has a bit more going on production-wise than many of the other fairly sparse tracks. This version is mostly a faithful rendition, although different emphases are chosen. The bass in this version does differ from the original’s bass, which is reminiscent of a more laid back Beatles’ “Come Together” line. The original also has Martin’s voice stand out more amongst the percussion and guitar, while this cover has them more melded together. The electric guitar gets more prominence towards the end before the song fades out.

“We Never Change” contains a simple dream of living life among friends. The volume of the guitar is a little overpowering in this cover, but Guerrette’s voice has a Martin-like quality that still manages to rise above the accompaniment. On both ends of his range, we still catch every word, and he transitions to falsetto as needed without forcing it. Cheers to living life and always being true.

The original “Everything’s Not Lost” has a hint of Billy Joel’s piano style in the verses and a single piercing note in the interludes between them. This cover takes a different approach. In more of a coffeeshop style, Dawn sings through the interludes like the back half of the original. Even with just her and an acoustic guitar, she adds more force in these interludes, mirroring Coldplay’s increase in intensity. Her version sounds a bit brighter and more hopeful that everything is in fact not lost.

Remember when hidden tracks appeared after a long silence at the end of the last track on an album? Good times! This song was hidden at the end of “Everything’s Not Lost.” Although the accordion-like accompaniment doesn’t feature in this one (no winding down carnival vibes here), a more intricate guitar accompaniment fleshes out the simple tune. Bonus points for the serene background to match the soothing tone of Eagleson’s voice.

Check out even more great Coldplay covers in our archives!