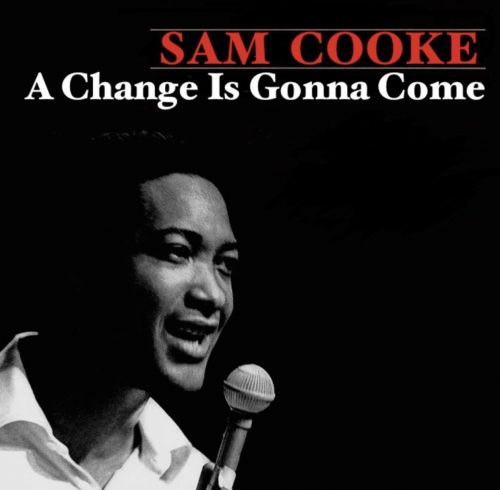 Given that a change of sorts has come {and more is due), what better time to revisit “A Change Is Gonna Come,” one of the greatest songs of hope and aspiration ever. Let’s remind ourselves of its durability through the decades, and listen as it (hopefully) fires up expectations of a better and braver new world.

When Sam Cooke wrote and recorded “A Change Is Gonna Come,” in 1964, the inspiration being a refusal to serve him at a “whites-only” establishment, it received a far muted response than his simpler songs of love and dancing. But, with time, it has become acknowledged not only as his finest moment, but a seminal staging post, and anthem, for black and civil rights. Assuming there is any real difference between the phrases. Not bad for a b-side that was only released (shortly) after his death.

An unlikely paean to change, the arrangement pure showbiz, the singer in a tuxedoed spotlight. Hell, it even near lifts a line from “Ol’ Man River,” shifting “I gets weary and sick of tryin’ / I’m tired of livin’ and scared of dyin’” to “It’s been too hard livin’, but I’m afraid to die.” Surely no accident, as Cooke had covered the song on an earlier release. (This article from the New Yorker bears reading.)

With a good couple of hundred covers racked up, there is sometimes a fear that “A Change Is Gonna Come” is rendered more as a statement, virtue signalling even, rather than of belief and/or intent. There seem many of those, maybe in the same way as “This Land is My Land” and “Blowin’ in the Wind” get duty covers by the bland and the bad. OK, maybe I am mixing my politics up with performance, a good song, which it is, content regardless, does it always have to be covered only by the committed to that cause? A discussion for elsewhere, but, trust me, there are some real clunkers, even by folk who should know better, and yes, I mean you, Bobby Womack and Billy Ocean. And don’t even get me started on the Blues Brothers. (Tellingly, such versions, and numerable other examples, come from live performance, where the saccharine introductions and reflex crowd reactions are as integral as the rendition.)

I guess I also have to declare my disclaimers: as a white middle class boy from the UK, seven years old in 1964, what might I know? Resident in the English midlands, home both to Enoch Powell and the 2-Tone Movement, the answer is no small awareness. (Enoch Powell? You don’t want to know; imagine if George Wallace could speak fourteen languages.) But it maybe explains my choice of covers.

My first choice instantly reveals myself, in my dreams, as more woke than sunrise. Billy Bragg is almost a cliche, so intent is he on promoting a solid socialist message to the suppressed. Bragg is oft ridiculed now for living in a big house in the country, forsaking the sackcloth and cold porridge of any true bearer of such standards, but I rate him as highly as I ever have. This early cover, from 1986, almost just him and his guitar, represents core Bragg, heartfelt and passionate, and it strikes through the sometimes less melodic songs he himself could write. It also discloses a truth he has only recently revealed, in that he can sing; the tune is pristine pure within the absence of any superfluity of arrangement.

Clearly I am no fan of excess instrumentation, explaining also my soft spot for this, however contrived the gruffness of Everlast might just be. Unfair? Well, regardless, this is a charming and simple version, the burbling current of organ adding lashings of integrity to the earnest guitar and vocal, ultimately forgiving the gradual entry of strings and choir. I struggle with white rappers, but, courtesy a chance gig sighting a few years back, I get the guy and like him. Here his “A Change Is Gonna Come” comes as heartfelt and thus valid.

I’ll be honest: it was this cover that made we want to write this piece, so huge is Tina’s voice. Now, I know the legacy and all, but I never quite “got” her importance, flappy miniskirts aside, at least, not until her earlier work with B.E.F., aka the brains behind Heaven 17. The same team as behind her cover of “Let’s Stay Together” on Private Dancer, they once again showcase the majesty of her rendition, with a semi-electronic backing emphasizing the contrast between the organic and the electronic. Turner’s voice has never been better or more expressive. A later live version, with Robert Cray, comes close, but even his guitar can’t better this wonderful version.

An extraordinary mess of melodrama, the combination of vocal histrionic and anticipatory production stutters here is remarkable, and if there is no other legacy of Baby Huey, dead at 26, this would suffice. His only long player was posthumous, produced by no less than Curtis Mayfield, with his cover of “A Change Is Gonna Come” being the centerpiece, his shriek as anguished as any ever. Arguably a tragic figure, beset by drink, drugs and a lifelong weight issue, only with the passage of time has his enormity been granted the respect it deserved. In repose, his voice is almost impossibly tender. OK, the spoken section may be dated, if no less poignant. And painful.

For the combination of a slick N’Awlinz production of sublime brass, clipped guitar chips, and a honey nectar vocal, it has to be this. That such sound could emanate from this frame, cheeks tattooed against any underestimation of his capabilities, always astonishes and always delights, whether with his brothers or, as here, alone. Round about his mainstream breakthrough with Linda Ronstadt came this approach-with-caution LP, Believe. Some of the other songs on the album are too much for even Neville’s vocal cords to redeem. Not so this. Covered also four years earlier, in 1989, with his brothers, but the overall feel of that one falls somewhat less heartfelt, with too much shimmer.