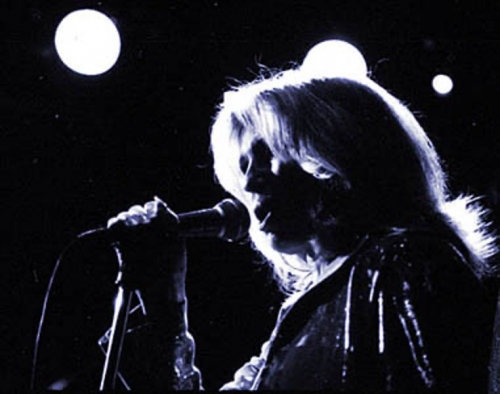 Edie Entertainer – These Boots Are Made for Walkin’ (Nancy Sinatra cover)

With literally hundreds of covers of this classic track available, a deeper dive on these pages is warranted and forthcoming. But don’t let Edie’s “snow-white, skin-tight, knee-high, could you die” camp treatment here fool you. The jazzy, piano-infused arrangement from Hank Bones may be just what we need today to bring a smile to our faces. Bones, a recognized Broadway and Las Vegas talent, recently recorded the track with Edie in a home studio. As for Edie (in quarantine), she’s the long-running emcee of Cirque Du Soleil’s Zumanity show, who contributed her talent, drag persona – and Las Vegas backyard – to this telethon for the Actors Fund to assist Las Vegas entertainers as part of the Monday’s Dark variety live-stream series.

“One of the strangest, druggiest, most darkly sexual songs ever written – ambitious, beautiful and unforgettable.” wrote The Daily Telegraph (London) in 2003 about the original Sinatra/Hazelwood collaboration. A critical and cult favorite, the 1967 psychedelic pop track, inspired by the Greek goddess Phaedra, endures – heard again in a just-released pre-fall 2020 advertising campaign for Gucci! (Must-see spot here.)

Scottish rockers Primal Scream teamed up with fashion icon Kate Moss (making her professional singing debut here) and jettisoned the typically dreamy female/male duet arrangement. The supermodel focuses on whispery repetition over a strong, but dark, electronic dance beat. The preferable extended mix featured above appeared on the group’s 2003 compilation Dirty Hits. It was preceded by its noteworthy release on the 2002 album Evil Heat.

MAOW – How Does That Grab You, Darlin’? (Nancy Sinatra cover)

Another Hazelwood-penned tune, the 1966 follow-up hit to “Boots” repeated many of the swingin’ ‘60s sonic elements of its predecessor and reached #7 on the US charts. On The Unforgiving Sounds of MAOW, the all-girl band turns the country-twang of the original into sub-two minutes of fast-tempo rockabilly/punk. The Canadian indie rock trio included singer/drummer Neko Case, later of The New Pornographers and alt-country stardom, and she handles the lead vocals on this 1996 track.

The stars aligned in 1967 when Sinatra was called to sing the opening and closing theme of the fifth movie in the iconic James Bond series. Sinatra wasn’t the first choice for the honor (her father was), but producer Cubby Broccoli recognized Nancy’s popularity stemming from “Boots” and eventually committed to her for the John Barry-Leslie Bricusse composition, one of the best-known Bond themes.

DiNizio, former lead singer/founder of The Smithereens – a New Jersey native like Sinatra – strips the 60-piece orchestra from the original down to a single piano here. His smooth baritone, reminiscent of Elvis Costello here, blends terrifically with impressive jazz/lounge pianist Jay Rowe. The song appeared on his 2006 covers album This is Pat DiNizio.

Another Sinatra/Hazelwood collaboration yielding another big hit single – “Sugar Town” peaked at #5 in December 1966 on the Hot 100 and #1 on the Easy Listening chart a month later. Hazelwood became adept at writing double-entendre lyrics to capture trends without jeopardizing radio airplay. In this case the veiled reference was to LSD – or “sugar,” to those in the know. The track was heard as recently as 2017 in the season opener of Better Call Saul.

Here, ska revivalists The Selecter apply an easy-going treatment on their fourth album, Hairspray (Pucker! in the UK), released in 1995. Besides Pauline Black’s silky vocal and some light ska dubbing, the most notable addition is the understated pedal steel guitar of legendary guest musician B.J. Cole. A worthy, lighthearted refresh of the original!

The Fashion – Something’ Stupid (Carson and Gaile cover)

Rounding out the birthday bonanza is Nancy’s 1967 #1 worldwide hit with father Frank. The duet was actually written and released a year earlier by Carson Parks and wife Gaile Foote (the forgotten Carson and Gaile) but it was the star power of the Sinatras, combined with the production of Hazelwood and Jimmy Bowen, that made the song their definitive smash.

For something completely different, the now-defunct Danish indie-rockers The Fashion turn the ditty on its head. The track opens with an extended three-note repetition and an almost foreboding organ underbed for nearly a minute before the vocals arrive. The band drew comparisons to LCD Soundsystem, and you can hear why. Eventually, singer Jakob Printzlau’s emo vocals give way to full, lush electronic orchestration that kicks in mid-way… and you’ll still hear Printzlau emoting down in the mix. After a crescendo, the arrangement drops back for a final repeat verse before the organ outro. The song appeared in 2009 on the iTunes-only release, Sinatra tribute album His Way Our Way.

Noteworthy: It just didn’t feel right leaving this celebration on a post-punk note, so like the artist herself, let’s class it up a bit. Here’s singer Cathy Fleck’s 2016 slow jazz rendition of “Something Stupid,” which absolutely deserves a listen!