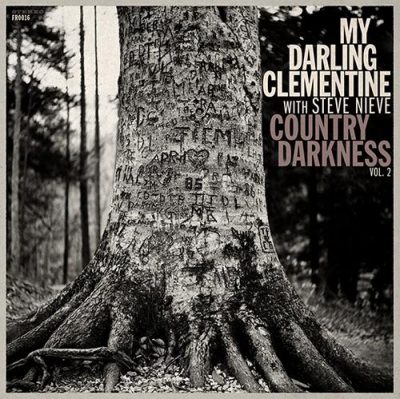 Given we are again treading the tearstained paths of country music, as soon as bawling follows brawling, and sinking follows drinking, one other thing in the world to rely on is the expectation honed by entitling anything as “Volume 1.” Not that it always delivers or guarantees a followup, but when husband and wife duo, My Darling Clementine, dropped Country Darkness, Vol. 1 (reviewed here), my hopes for a volume 2 went high and held there. Thankfully, the wait for said volume has not been a long one.

Country Darkness, Volume 2 has arrived. Once more it is an EP of songs of Elvis Costello, tackled by Michael Weston King and Lou Dalgleish. The duo maintain their mantle as a latter-day George Jones and Tammy Wynette, tho’ with fewer guns and lawnmowers and (hopefully) less naggin’ and nippin’. And once more it is the rippling fingers of guest Steve Nieve that does the heavy lifting beneath their vocal interplay, again proving himself a less frantic and more sensitive player than when with his usual employer. An EP, like its predecessor, with another four songs; I wonder how many more are in the box? (The press release suggests one more, 12 songs having been chosen overall.) Certainly there is no shortage of Costello songs that fall into this genre, and despite the relative annoyance of this gradual drip feeding, I am sure it makes for good accounting for the duo and their record company. Plus, I can’t wait for the eventual compilation, duplication be damned.

Opener “Either Side of the Same Town,” a slow-burner from 2004’s The Delivery Man, demonstrates the close relationship between country and soul. If a clear reference point might be Dan Penn’s “Dark End of the Street” (itself already covered by Costello on The Kojak Variety), then this is the stripped-back original to the more impassioned James Carr evocation adopted by its author on the original. Nieve’s piano is a majestic stage for King’s sonorous vocal, balanced by the lighter touch of Dalgleish. Some swoony organ slots in ahead of a shared chorus, a delightfully appropriate twangy guitar break carrying the middle eight. We’re in business.

“I Lost You” starts off as potentially a weaker number, before Dalgleish seizes the song. An unusual move, given the (flawed) perception that she is the secondary singer, but it sure pays off. Ever the chameleon, here she evokes a blend of Chrissie Hyde and a younger Lucinda Williams, with a stronger grasp on the song than her husband. A more straightforward balladic take than the source, it arises from the bluegrass-rockabilly hybrid National Ransom, from 2010. Costello wrote the song with, of all people, Jim Lauderdale. His finely tuned commercial ear, maybe, explains the astute earworm material it becomes on further listening.

With Dalgleish now taking first dibs on next song, “Different Finger,” first heard on EC’s 1981 album Trust. Back then the song was seemingly bereft of any overt country influence, suddenly and glaringly obvious on a hasty relisten just now. Here it is taken at an altogether jauntier lick, with a south of the border feel courtesy of some delightful accordion work, courtesy Piero Tucci, channeling the full Flaco Jiminez. Nieve works hard to eradicate the memory of his original piano part, with a brief centerpiece where he trills away like Russ Conway. The first Country Favorites song where I prefer Costello’s take; strangely, it is this version I find myself humming today.

“Still Too Soon to Know,” itself surely inspired by Roy Orbison’s cover of Don Gibson’s “Too Soon To Know,” stems back to 1994’s Brutal Youth. Already a sepulchral and haunting song, King and Dalgleish again apply some gravitas, with weeping steel whining over the stately piano, whilst verses are traded in the build to a chorus that cries out in the silence. A stellar finale, matching the opener for power, bookending the lighter fare between.

A broader work than Volume One, overall it falls slightly short of its predecessor, even if it does include, in “Either Side of the Same Town,” the strongest song of the project thus far. I await Volume Three with no small anticipation.