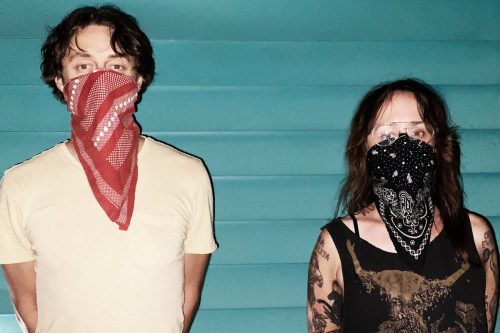 If you’ve seen The Sopranos, you know Alabama 3’s “Woke Up This Morning.” It’s arguably now one of the most famous themes in TV history. Few songs are so associated with a particular type of TV show, even though the song predated the show by a couple years. The moment you hear the title line, it’s almost impossible not to envision Tony Soprano driving through New Jersey.

Guts Club clearly don’t want that connection. Though nominally a folk group, this New Orleans duo has taken an entirely different approach on this cover, abandoning their acoustic instruments for electric guitars and a synthesizer. They’ve even renamed their version “Song for Carm,” shifting the focus to Tony’s wife and back to the song’s original subject: a woman who has suffered domestic violence fighting back, not gangsters.

The propulsive and beat and gospel backing vocals of the original almost make it sound as though it is celebrating the violence it describes – but with this version, there is no doubt things are bad. Lead singer Lindsey Baker’s moaning voice and the droning guitars create an extraordinarily ominous feeling that what’s happened is the worst possible outcome. There is no question the song is about some great personal calamity, rather than a righteous act of revenge.