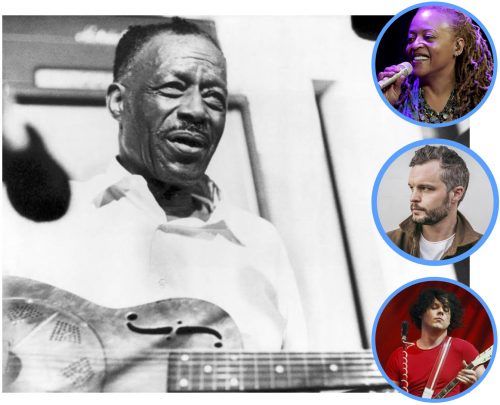 Any artist who covers the song in his wake is left to draw from their favorite verses–or repeat the ones they know from the recording they happen to know. And of course they are free to bend the music itself to suit their mood. The three artists presented here don’t just change things up, they each make something distinctive from the commonplace blues progression that forms the song’s backbone.

Our pick for the Good version is by far the most popular of the three, and maybe the most primal.

Jack White first heard Son House at age 18 and it changed his life. His insight was that if House didn’t keep a perfect rhythm, no one cared: what mattered was the attitude behind the man’s singing and playing. This helped crystallize White’s guiding aesthetic (at least during his White Stripes period): a minimalist style that’s more than OK with imperfection.

The White Stripes dedicated their first album to Son House. On their follow-up, De Stijl, they covered “Death Letter.” On live dates, the band liked to jam out on the song, sometimes stretching it to twice the length of their studio version. Such is the case here. (Granted, some of the song length is due to a detour into White’s favorite Son House number, “Grinnin’ in Your Face,” which he punctuates with a nice mic drop.) Jack ‘n’ Meg attack the song and soon whip themselves into a frenzy. If there are some missed notes, some mis-timed beats… well, the attitude is exact, and scuzzy rawness is the point anyway. Buckle up for this death-defying ride.

For a Better version, we put forward one that’s never been officially recorded by the artist. It’s by Sweden’s The Tallest Man on Earth (actual name: Kristian Mattson; actual height: 5′ 7″). You can find a handful of audience videos that capture Mattson performancing the song at small venues from his first solo tour of the U.S., about ten years ago. He seems to have dropped the remake from his repertoire after that tour.

A highly-accomplished songwriter in his own right, The Tallest Man on Earth has turned heads with his covers. If you listen to his weekly quarantine covers series and don’t find something you like, maybe you just don’t like music. The mix of artists he takes on is dizzying, and his innovative instrumental approach (often with non-standard tunings on guitar or banjo) tends to cast an intriguing new light on a familiar song.

Most artists play “Death Letter” in a major key, just like Son House. Given the bleak lyrics, a minor key works well too, as we’ll soon see. But The Tallest Man on Earth plays chords that are not minor and are not major; they are modal or suspended. Joni Mitchell refers to these suspended chords as “chords of inquiry.” This is fitting, because in Mattson’s interpretation of the song, the letter is an inquiry (and an accusation): “how come the girl you love is dead?” His delivery is impassioned if not outright possessed, not so far from Jack White as you might think.

The Gold Medal for this song has to go to Cassandra Wilson and her ace band, for their interpretation from 1995. This cover was somewhat overlooked on the best-selling New Moon Daughter album, which featured the jazz singer’s surprising remakes of U2, Neil Young, and The Monkees. But last year Wilson’s “Death Letter” finally got the play it deserves, taking a new role as theme song for HBO’s True Detectives. This was likely T-Bone Burnett’s doing–he’s the series’ music producer, and he has called Wilson “the greatest living jazz singer, and maybe the greatest singer living right now in the United States.” The eeriness of Wilson’s version certainly is in perfect keeping with the show’s aura of intrigue and danger.

Not to disagree with Burnett’s take on Wilson as vocalist, but her band crushes this song and makes her arrangement magical. Shakers and hand-drums establish the earthy southern atmosphere; double bass and minor-key guitar slink along like a creature on the prowl. It’s got all the time in the world. Tenor banjo and reverb-soaked slide guitar are layered on gradually, and cry out as Wilson sings about the morgue and the burial ground. “Hush,” she sings, and the instruments withdraw; she thought she heard her dead lover call her name. A rattle emerges from the swampy mix to alter the mood. Rarely does a piece of music unite the primal and the otherworldly like Wilson does here. This is Mississippi roots music at its best.

For more covers of Son House (including other remakes of “Death Letter”), go here.