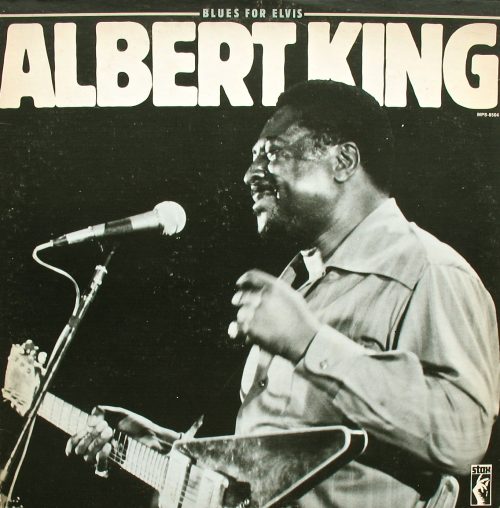 It’s not entirely clear whose idea it was for Albert to record an album of Elvis covers for this, his sixth album on Stax, but the decision was an inspired one. Since Elvis’s brand of rock ‘n’ roll in part derived from the blues, Albert would simply be “bringing it all back home.”

The album kicks off with King taking on “Hound Dog,” in a version that bears more of a resemblance to Big Mama Thornton’s original recording than it does Elvis’s. That’s no bad thing, however, as Albert leans into the song’s natural blues feel, ending the song with one of his trademark sharp, no-notes-wasted solos.

In sharp contrast to the first two tracks, no attempt is made to reinvent “All Shook Up,” which sees King stick closely to Elvis’ blueprint. “Jailhouse Rock” fares better, with Willie Hall working overtime and some fine dueling horns making way for an extended Albert solo.

“Heartbreak Hotel” once again finds Albert staying disappointingly close to the Elvis arrangement. “Don’t Be Cruel,” on the other hand, is a song transformed. Gone is the playful swing of Elvis’s version, replaced here by a horn-driven rhythm and blues workout.

“One Night” – or “One Night (of Sin)” as the original version by Smiley Lewis was sometimes called – was subject to major lyric rewrite when Elvis recorded it in 1957. Which lyrics would Albert King choose for his version? Neither. Instead, he lets his guitar do the talking on a fiery instrumental.

Another inventive reinterpretation< follows in the form of Carl Perkins’ “Blue Suede Shoes.” With the horns and the rhythm section locked into a tight groove behind him, King uses the song as a springboard for some fine guitar work.

Thanks to King’s towering reputation as a guitarist, it’s easy to overlook his considerable talents as a vocalist. But his take of “Love Me Tender” showcases his voice, and he handles this rare chance to sing a ballad very well indeed before finishing things off with another excellent solo. The whole thing makes you wonder what an Albert King soul album might have sounded like (Stax was known more for soul than blues, after all).

Blues For Elvis is an album of two halves. The songs where Albert follows Elvis’s arrangements are good, but the record only really catches fire when the tunes are retooled to fit Albert’s signature style. Despite the unevenness, however, the band is excellent throughout, with the “Stax sound” in full force.

Interestingly, Elvis himself would record at Stax three years later, laying down tracks that would be used for a number of albums over the following years.  Did this album influence his decision to record there? Perhaps. If he had heard it, he would probably have been reassured that both he and his songs were in good hands.

Read about another King of the Blues in our In The Spotlight feature on B.B. King