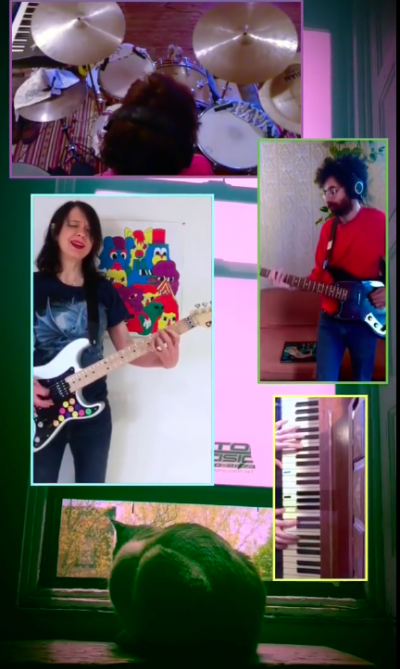 No Rush song speaks as directly to the tormented teenage soul as 1982’s “Subdivisions.” Its fat synthesizer lines and darkly perceptive lyrics about suburban teen alienation made it the perfect angst anthem to turn up to 11. Forget “How Soon Is Now”; “Subdivisions” is the song that truly understood what you were going through. The song’s release coincided with the launch of MTV, so its video  was a frequent part of their daily rotation.

From her days in ’90s alt-rockers Helium through her early 2000s solo excursions to her past decade serving in both Ex Hex and Wild Flag, one thing is certain: Mary Timony doesn’t make bad records. Her sonic discography travels everywhere from glorious ’70s Sunset Strip glitter anthems to stoner-ish balladry to regal folk prog with no speed bumps. And, oh yeah, she can totally shred.

Timony’s cover of “Subdivisions,” performed remotely with David Christian, Brian Betancourt and her cat Ringo, is end to end love. From the acknowledgements of the original video in its visuals to the intro starring the most passionate fictional Neil Peart fan that ever lived, Freaks and Geeks‘ Nick Andopolis, the whole thing is disarmingly heartfelt, grungy and sweet. Add to all that a characteristically fine, dirty and garish Timony guitar solo and it becomes nearly impossible not to smile and soothe all your restless dreams of youth.

Hi! Here’s a lockdown tribute to RUSH that David Christian, Brian Betancourt, Ringo the cat and I did! 🤘🤘🤘@job_cain @brianbetancourt