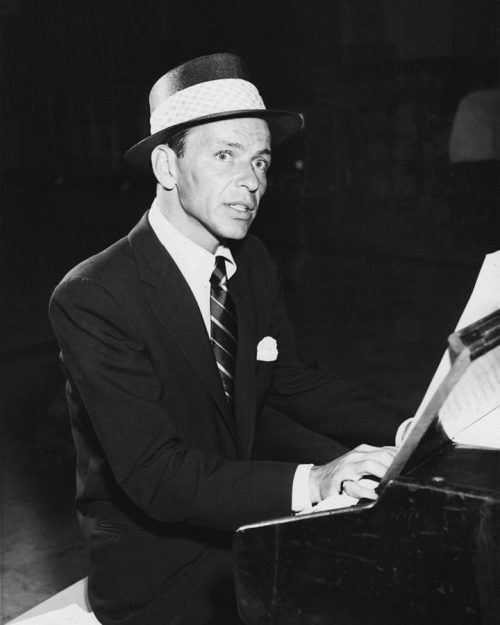 Frank Sinatra hailed from an era where singers were singers and songwriters were songwriters, and rarely the twain did meet. Great American Songbook standards penned by the likes of Irving Berlin, the Gershwin brothers, and Cole Porter were tailored to Sinatra’s specifications by master arrangers like Nelson Riddle, Gordon Jenkins, and Billy May, and brought to life by Sinatra’s formidable interpretive skill. “I’m a real stickler for perfection, in my work and most other people’s work too,” Sinatra said of his approach in 1956. “I find myself picking whatever I do apart, which I do believe is quite healthy.”

This formula served Sinatra well throughout the ’40s, ’50s and into the ’60s, as Frank released albums at a staggering rate that only accelerated when he formed his own record label, Reprise, in 1960. Unwilling to wait for his Capitol Records contract to expire before recording for Reprise, Sinatra essentially began competing with himself; the 1961 Capitol album Come Swing With Me!, for example, was immediately followed by the almost identically titled and packaged Reprise album Swing Along With Me. In 1961 and 1962 alone, Sinatra released eleven new studio albums.

Nothing lasts forever, however, and by the mid-’60s Sinatra felt the ground moving beneath his feet once again. His old foe rock & roll, which he had successfully fended off in the ’50s, had returned in the form of British bands like The Beatles and The Rolling Stones, while a new generation of singers who wrote and performed their own material were becoming more popular by the day. Frank Sinatra was in danger of becoming an anachronism.

Sinatra, like most singers from the old guard, realized that he urgently needed to adapt to the changing times. Beginning with the Strangers in The Night album in 1966, Sinatra began including songs by modern songwriters alongside the usual standards. The new approach reaped immediate rewards, bringing Sinatra his first number one LP in six years.

Far from leaning into his comfort zone, Sinatra’s keenness to prove himself relevant in the age of Beatlemania led to some adventurous artistic choices, including a collaboration with Brazilian Bossa nova pioneer Antonio Carlos Jobim. The resulting album, Francis Albert Sinatra & Antonio Carlos Jobim, is a quiet masterpiece, blending stylish reworkings of old standards with Sinatra’s takes on some of Jobim’s material, including an excellent version of “Quiet Nights Of Quiet Stars.”

For a short while it looked like Sinatra had found a workable balance between the old and the new. However, alarm bells sounded when Sinatra’s long-awaited collaboration with Duke Ellington, Francis A. & Edward K., peaked at a disastrous number 78 on the Billboard chart. The failure of the album may have had something to with the strangely uncommercial cover art, which is easy to imagine people bypassing without realizing that it was a Sinatra or Ellington record. Still, the music is excellent, particularly the inspired version of Bobby Hebb’s “Sunny.”

Despite the artistic success of Francis A. & Edward K., the album’s commercial failure meant that drastic changes were in order. Sinatra’s beloved Great American Songbook standards, already featured increasingly sparingly, would now be entirely absent from his new albums. From Cycles (1968) onward, Sinatra would devote himself to recording songs written by contemporary songwriters.

This approach yielded wildly mixed results, largely due to Sinatra frequently sounding like he was recording songs that he didn’t particularly care for, chosen purely because of their commercial potential with younger listeners. He often comes across as disengaged, which was something that could never be said of Sinatra before 1967. However, Sinatra still occasionally found a song he could get his teeth into; the shining beacon of hope on Cycles, for instance, is a wistful interpretation of Joni Mitchell’s “Both Sides Now,” in a delightful arrangement featuring harpsichord and Don Costa’s signature strings.

Despite the success of the “My Way” single in 1969, Sinatra seemed lost. He retired in 1971 only to return a year later, and his recorded output became increasingly scarce. It was not until 1979 that Sinatra was presented with a project that he felt had the potential to return him to his 1950s glory: Trilogy: Past, Present and Future.

Trilogy was conceived as a sprawling concept album that would eclipse even Sinatra’s Capitol albums in terms of sheer ambition. The original idea was that each of the album’s three discs – respectively titled “The Past”, ” The Present”, and “The Future” – would be orchestrated by the three arrangers synonymous with Sinatra’s heyday: Nelson Riddle, Billy May, and Gordon Jenkins. However, Riddle’s relationship with Sinatra soured before recording could begin, resulting in Don Costa being drafted in to replace him. “The Past” would see Sinatra record a disc of standards for the first time in over a decade; “The Present” would feature contemporary songs; and “The Future” would be a free-form song suite composed by Gordon Jenkins.

The concept is fascinating on paper, but less successful in practice, despite giving the world Sinatra’s final signature song, “Theme From New York, New York.” Sinatra’s return to his beloved standards on “The Past” is more than welcome, but Billy May’s arrangements seem better suited to the Sinatra of 1959 rather than the 1979 model. “The Present” suffers from uneven song selection and sometimes uninspired arrangements, while “The Future” is surreal to the point of being beyond description. You have to hear it to believe it.

Despite all of this, nestled amongst the strange song selections, misjudged arrangements and bizarre concepts is one of the shining jewels of Sinatra’s late career: a glorious version of George Harrison’s “Something”, the one track on the album arranged by Nelson Riddle. Sinatra had recorded the song before in 1970, but this version, with Sinatra’s voice resting atop Riddle’s majestic strings, finds him fully invested in the song and its meaning.

The negative critical reaction to Trilogy stung Sinatra, but had a much greater effect on Gordon Jenkins, whose work on “The Future” was singled out for particularly harsh criticism. In a bid to restore his friend’s confidence, Sinatra commissioned Jenkins to arrange his next album, She Shot Me Down. This is another album of contemporary songs, but the difference between this and earlier efforts is that the songs appear to have been chosen with extreme care, and sequenced to create a coherent and logical whole. Sinatra’s voice – alarmingly low in the mix on parts of Trilogy – is front and center where it belongs, and the atmosphere is reminiscent of Sinatra’s “torch song” albums like No One Cares or Only The Lonely. At the heart of the album is a strikingly effective cover of Sonny & Cher’s “Bang Bang (My Baby Shot Me Down),” which had previously been covered by Frank’s daughter Nancy Sinatra.

She Shot Me Down was an artistic but not commercial success, and would be the last album Sinatra recorded for Reprise, the label he had founded two decades earlier. The next time Sinatra entered the studio would be in 1984, to record the album L.A. Is My Lady with Quincy Jones, the first Sinatra-Jones collaboration since the albums It Might As Well Be Swing (1964) and Sinatra At The Sands (1966). The title track and Michel Legrand’s “How Do You Keep The Music Playing?” aside, this album was devoted to Sinatra’s beloved standards. He even managed to find one he had never sung before: Kurt Weill and Bertolt Brecht’s “Mack The Knife”, featuring George Benson on guitar.

This would be Sinatra’s final solo album. Aside from a pair of Duets albums in the early 1990s, he would never record again before his death in 1998. Sinatra’s attempts to stay relevant may have led him down some strange paths, but he must be commended for his willingness to stretch himself and search out songs he could bring to life. So, let’s raise a glass to to the Chairman of the Board; may his songs live for forever, and the last voice we hear be his.

Read more about Frank Sinatra in our ‘That’s A Cover?’ feature on “Strangers In The Night.”