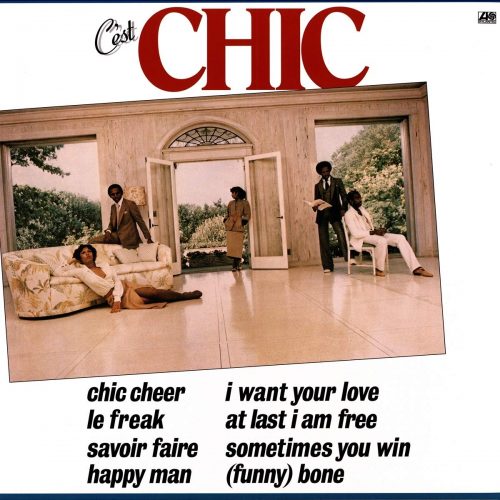 What’s the first thing that comes to mind when someone mentions Chic? The pretty much guaranteed #1 answer is of course “Le Freak,” the 1978 stone cold classic anthem that has come to epitomize disco in its every manifestation; from the overall sound, to the sartorial style, to the era it happened in as a whole. There’s a good chance that the track following that on your mental turntable would be Chic’s other absolutely killer floor filler, the gorgeously soul stirring “I Want Your Love.” As it happens, both songs featured on Chic’s sophomore album C’est Chic, a ridiculously prescient piece of art that quickly established bandleaders Nile Rodgers and Bernard Edwards as indisputable musical masterminds as well as genius seers of production.

But underneath the pounding glamour and virtuosic Edwards bass-playing, Chic had a secret talent. While they could expertly turn out seminal late-night party anthems like nobody’s business, they were also capable of crafting the most incredible, evocative, lonely, 2 AM in the city ballads. Case in point: “At Last I Am Free,” from the aforementioned C’est Chic.

“At Last I Am Free” is ostensibly about letting go of a relationship, but its mournful tune and melancholy vocal performance from Alfa Anderson imbue it with an undeniably ominous undercurrent. It doesn’t sound like the protagonist is strictly giving up on a person, but maybe on life itself, and this foggy ambiguity makes for a powerful listening experience. As obscure as the song appears (a 7-minute-plus ballad that was never a single), it’s become something of a cult classic over the years, spawning an assortment of cover versions, the best of which are below. In fact, a large part of the subsequent interest in the song is due to the popularity of one of the very covers you are about to hear!

Liz Fraser’s is even better.

Robert Wyatt’s is just the best.

Nancy Wallace – “At Last I Am Free” (Chic cover)

While a number of artists have gone for the bells and whistles in their covers of “At Last…”, British folk artist Nancy Wallace has kept it simple and in the process has left them in the dust. On her cover she seamlessly transforms “At Last…” into a regal Fairport Convention song from the early ’70s, right down to the handsome violin flourishes. It’s absolutely lovely. And the fact that the song can be stripped down this way and still sound so amazing is a tribute to just how strong its bones are i.e. very, very strong.

Welcome to a classic cover of a cover. Cocteau Twins legend Liz Fraser’s version of “At Last…” was recorded for the Stop Me If You Think You’ve Heard This One Before compilation, celebrating the Rough Trade label’s 25 anniversary back in 2003. And the version Fraser was acknowledging was not the Chic original, but Robert Wyatt’s cover of the song that had been released through the label in 1980.

Until Fraser’s classic collaboration with Massive Attack on 1998’s “Teardrop,” it was rare to hear her magnificent voice unadorned, without a gigantic wall of sound swirling behind it. On “At Last…” she goes one step further than she does on “Teardrop,” offering up one of the most intimate vocal performances of her career…which of course is absolutely beautiful. It’s a hymn with a hint of a groove, a warm, languorous piece of gorgeous indie gospel.

Speaking of which, time for the genuine article….

Robert Wyatt – “At Last I Am Free” (Chic cover)

Since 1970, former Soft Machine vocalist/drummer Robert Wyatt has been making eccentric, eclectic and beautiful albums that, no exaggeration, sound like absolutely no one else’s on the planet. His unconventional songs and plaintive, sweetly reedy voice have pretty much ensured his permanent status as a cult hero, as opposed to a pop star. His one moment of pure pop success came in 1974 via his still superb cover of Neil Diamond’s “I’m A Believer,” which landed him in the UK Top 30.

Wyatt’s 1980 version of “At Last I Am Free” is wonderfully peculiar and poignant, featuring a vocal as bright as the sun, over noodly keys and what feels like the world’s slowest baseline. Wyatt’s singing here can best be described as “power keening,” as it perfectly conveys the songs emotional ping-pong from despair to resignation and back again. Once he hits that falsetto in the fade out, the flag is officially planted: there’s never going to be a better cover of this.