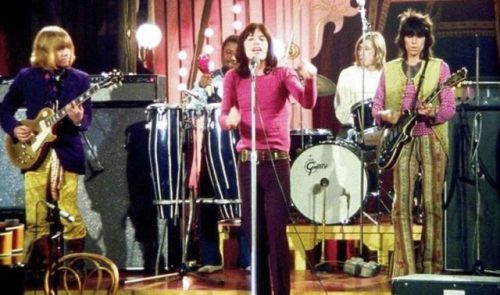 Like many selections in the Five Good Covers series, this song could easily support Ten or Fifteen Good Covers. “No Expectations” appeared on the Rolling Stones’ Beggars Banquet album from 1968, so it’s been around a good long time. And it appears to be aging quite well—not all songs do—so we have every expectation that up-and-coming artists will keep it alive in years to come.

You wouldn’t call “No Expectations” a high-profile Jagger/Richards composition by any means. But it’s not been entirely neglected either. Within a year of its first appearance (on the B-side to “Street Fighting Man”), Joan Baez released a version of it. Johnny Cash recorded it a decade later. In the last couple of years we’ve seen covers of “No Expectations” from Kurt Vile and from Son Volt–each artist released their version in an exclusive-rights arrangement with a streaming platform. A few artists who opened for the Rolling Stones in decades past have taken to performing the song—Grace Potter and George Thorogood are examples.

But none of the artists mentioned so far have made this particular short list of five. On a different day, in another mood, they would have.

What is it that attracts such a wide variety of musicians to such a simple and overshadowed song? The answer may be exactly that it’s simple—it provides a solid base to build on—and that it’s overshadowed. In other words, it’s not overplayed, unlike “Sympathy for the Devil,” the track immediately before “No Expectations” on Beggar’s Banquet.

If the lyrics have some depth and richness to them, the music itself could hardly be more basic: It cycles through a 3-chord blues pattern with no chorus or bridge, no refrain or turnaround to break things up. Compared to the pumped-up “Street Fighting Man” and other tracks, there’s something inert and static about “No Expectations.” That’s not to say it fails to move emotionally. The trick, if there is one, is that the melody doesn’t start on the home or root chord—this gives Jagger’s vocal line an uprooted quality, as if in search for some place to rest. This suits the lyrics perfectly—the song is about leaving and about being left.

Before we get to the covers, it’s worth noting that we have two filmed performances of the Stones playing “No Expectations.” One shows the band at the infamous “Rolling Stones Rock N’ Roll Circus” TV special, with Brian Jones featured on slide guitar. This was the last song that the founding Stones member had a hand in before leaving the band (and then meeting his tragic end in a swimming pool weeks later); this film shows Jones’ last show—ever. The other film captures the band a few months later at the memorial concert for Jones in London’s Hyde Park: it was their first appearance with Mick Taylor, Jones’ 20-year-old replacement. Taylor has no trouble playing the signature sound of the song—the bottleneck slide–despite whatever nervousness he must have felt.

We are looking at an underplayed Rolling Stones song, so why not start with an under-sung musician, Jim Campilongo. The guitarist has worked with Cake, Norah Jones, Nels Cline, and many more, but as a guitarist’s guitarist he doesn’t exactly have a household name, only a nickname, “The Sultan of Twang.” Fender Guitar has even produced a Jim Campilongo Telecaster Signature Model in his honor.

But don’t think he’s going to burn up the fretboard on “No Expectations” —he takes a restrained, almost minimal approach to the song instead. The buttery tone he achieves provides a lovely backdrop for guest singer Leah Siegel. Her voice melts into the music with a sultry quality that Jagger himself would appreciate.

John Hartford is mostly known for writing country-flavored hits like “Gentle on My Mind,” and parlaying that success into much a different gig: hosting his own prime-time tv show. But he’s more than just a telegenic singer-songwriter: a stellar banjo-picker, Hartford could jam with the world’s best jammers, and his 1984 cover of “No Expectations” proves it.

Hartford is said to have been the first musician to meld bluegrass with marijuana. That’s a claim we’ll leave weed historians to settle, but judging by Hartford’s work here, it might as well be true. While Hartford had a handsome voice, it’s the instrumentalists who shine on this track. The studio effects applied to the solos are borderline saccharine (that’s often the best kind of saccharine), but the solos themselves are pretty smokin’. The band assembled here is a walking hall-of-fame exhibit, and includes Sam Bush and Marty Stuart on mandolin, and the legendary Mark O’Conner on fiddle. Hartford neglects to take a solo, but the witty picking he tosses in along the way spurs the guest players to pour it on strong.

Here’s a cover that is mostly about the voice, the transcendent vocal power of Odetta in her prime. Though it must be said that the string and woodwind arrangements are an intriguing match for Odetta’s dignity and gravitas. Probably no other cover of “No Expectations” features an oboe.

Odetta was not just a ground-breaking folk artist and diva, but an influential figure in the civil rights movement. She helped America shake off its McCarthy-era hangover and find its voice, its vision of peace and justice. Her first album (Odetta Sings Ballads and Blues from 1956) convinced a teen-aged Bob Dylan to trade his electric guitar for an acoustic. (He famously reversed that decision a few short years later at Newport Folk Festival.)

Odetta’s performance on “No Expectations” is also a reversal of sorts. It appeared on her Odetta Sings album, a 1970 release that finally showcased her talents outside of the protest music context that brought her to prominence. The material she chose to interpret on the project was mostly drawn from pop music’s best young writers—Jagger/Richards, Elton John and Bernie Taupin, Van Morrison, Paul McCartney. It was all very rock-oriented, and white, and Euro-centric enough to unsettle Odetta’s tradition-minded folk fans. Rather oppressively, those fans insisted she keep singing about racial oppression. Odetta insisted on the freedom to explore other dimensions of her experience. It sounds like she discovered in “No Expectations” something meaningful and moving to work with.

It’s a good bet that Odetta’s cover thrilled Jagger and Richards, two men obsessed since boyhood with African-American music and culture. But this more recent cover by rising Nashville star Margo Price might please the songwriters just as much. Consider their love of Americana and country, and the fact that it was with Beggars Banquet that the Stones started to explore country-music influences. That urge only intensified in subsequent years, with a little help from their friend Gram Parsons. Country flavor aside, it’s also likely that the Stones would sense a kindred spirit in Margo Price’s self-description: “songbird, Thunderbird and jailbird.”

Not that Price is strictly a country artist: if you triangulate between Lucinda Williams, Tom Petty, and her pal Sturgill Simpson, you start to locate Price. Or maybe it’s Loretta Lynn, John Prine, and Willie Nelson? Price can sell out the Ryman Auditorium three nights running, but some aspects of the country scene don’t sit well with her. We’ll see what her upcoming album reveals this summer, whether she doubles-down on country or takes a different direction. In any case, her straight-ahead take on “No Expectations” dissolves the question of genre–its blend is its own. Price and band bring a relaxed cadence and easy charm to the song. The dobro delivers a strong Americana flavor in place of the bottleneck blues sound of the Stones’ version. Price turns the heat up a little on the last verse, emphasizing the not-so-quiet desperation of the lyrics.

Southern rockers the Black Crowes achieved success in the early ’90s by modeling themselves on something so dated it had started to seem fresh again: early ’70s British rock. The Rolling Stones above all. The Crowes soon found themselves opening for the Stones at London’s Wembley Stadium—a pretty strong endorsement of their chosen path. While there seems to have been some bickering between the two bands in the years since, it hasn’t stopped the Crowes from heaping more and more Jagger/Richards selections onto their set lists—“It’s Only Rock and Roll,” “Happy,” “Wild Horses,” “Loving Cup,” and of course “No Expectations” among them. They also struck up a working partnership with Jimmy Page from another famous 70s British band, but it’s the Stones they love to cover.

This version, live in Milan in 2013, captures the band in full command of their craft (if near the end of their tether in other ways). They take on “No Expectations” with an engaged but relaxed air. The singing is soulful, the mandolin leads are sweet as can be, and the slide work is tasty in a Mick Taylor kind of way. Then there’s the band’s ability to let the song breathe—the swells of intensity are proof that the band members are closely in tune with each other and with the material.

3 Responses to “Five Good Covers: “No Expectations” (The Rolling Stones)”