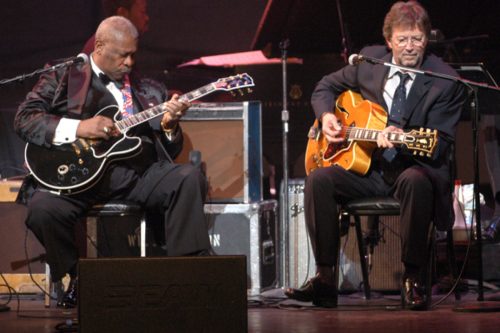 “Rollin’ and Tumblin’” has origins dating back to the ‘20s when it was first recorded by Hambone Willie Newbern as “Roll and Tumble Blues.” The track was covered and reworked several times in the ensuing decades. It became a modern blues standard when it was recorded by Muddy Waters in 1950. From there, countless blues guitarists covered the song, including Clapton who released versions of it with Cream in 1966 and on his 1992 Unplugged album.

Riding With the King contained a mix of traditional acoustic blues and the electric sound that made both King and Clapton legends. For the “Rollin’ and Tumblin’” cover, they meld both electric and acoustic approaches. The song bounces along with a light shuffle, the two trading off vocals and solos. It feels like the jam itself was meant to last “the whole night long.” Listening to the track, one has to wonder why they left it off the original album. You’ve never heard two old guys with the blues sound like they are having so much fun.