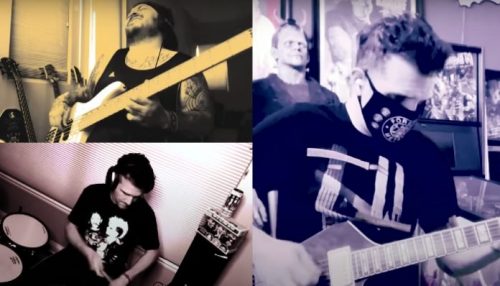 1989 was a crucial time in my musical education. At age 11, I was several months into taking drum lessons when my teacher asked me a loaded question: “What drummers do you listen to?” Given that it was the ‘80s and I was deeply enthralled with metal, I rattled off a list of big-haired, double-bass drum playing thunder gods, including Anthrax’s Charlie Benante. My teacher, in what was likely a well-rehearsed speech, quickly rattled off a list of drummers I should be listening to including: Neil Peart of Rush, Bill Bruford of Yes, session drummer Steve Gadd and jazz masters Billy Cobham and Art Blakey. All great drummers, who I’ve been listening to for years – the fact that I can still rattle off the list 31 years after the fact is telling.

In recent weeks though, I have been thinking that maybe my teacher did not give some drummers from the era, particularly Benante, the credit they deserved. During this lockdown, Benante has teamed up with bassist Ra Díaz of Suicidal Tendencies as well as a rotating cast of other musicians to release a series of covers. These include songs by the likes of Rush, the Beastie Boys and Tom Petty. Benante also joined Corey Glover of Living Colour for a reworking of that group’s “Funny Vibe.” In all of the tracks, Benante plays a series of patterns that would seem worthy of study for the budding percussionist.

Benante and Díaz’s latest is a heavy-metal version of Billie Eilish’s oft-covered “Bad Guy.” With the cover, Benante lays down the drum beats, but also takes on both the lead and rhythm guitar responsibilities. Díaz for his part, plays some funk-metal basslines. The two decided to let Eilish herself handle the singing as they played their new rendition under her vocals. The result is a bone-crunching metal track worthy of the mosh pit.

Listen to the cover of “Bad Guy” and others below.