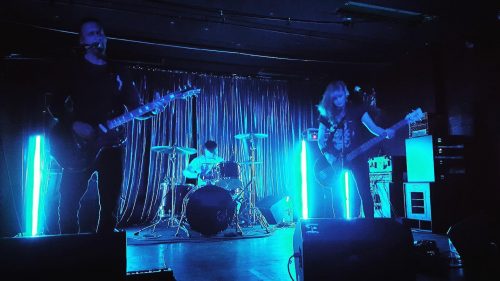 Spotlights are a Nu Gaze/Post-Metal band from Brooklyn who have put out three albums and an EP over the last four years. Their sound is pretty typical of Nu Gaze, a combination of the dreamy haze of Shoegaze plus a stronger alternative rock influence with more emphasis on conventional rock dynamics.

Spotlights don’t reinvent the wheel on their new cover of Radiohead’s “All I Need”; rather, they take the song to its logical conclusion. Everything in the track is amped up: the drums are louder, the keyboard bass is deeper, the background haze of the original guitar is replaced by multiple instruments. Whereas Radiohead’s version builds to a climax you could describe as pretty, this climax is a lot louder, with almost metal-level pummeling drums and bass, something you probably didn’t expect from this song but which makes sense in context. It’s a dramatic version which unleashes the coiled energy of the original performance in a dramatic display.

Check out our list of the Best Radiohead Covers Ever here.