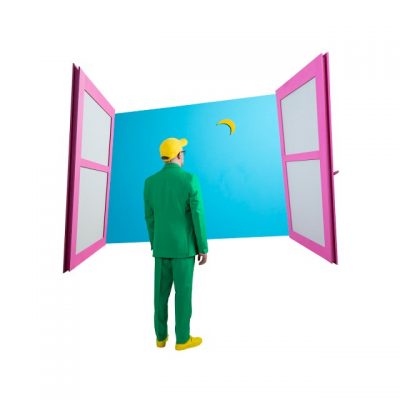 And so with that, meet Steve Reidell.

Reidell is the touring bassist with electro-cool weirdos Black Moth Super Rainbow, part of hip-hop duo Air Credits, as well as one half of production duo The Hood Internet (and is also someone who can serve up a pretty sweet AC/DC musical coming of age story). In honor of both Duke’s 40th birthday and the planned Genesis UK reunion tour scheduled to begin in November 2020, he has offered up Duke (40th Anniversary), a tribute album covering 9 of the 12 tracks from the original LP.

Now while Duke wasn’t technically a concept album,  you could sense a vague thread connecting the songs together if you chose to listen to it that way. What’s funny, though, is that after hearing Reidell’s interpretation, Duke is actually easier to buy as a concept album than the original version is. That’s because Reidell’s version has an overall feel to it, a very particular haziness and fuzziness, and that consistency can make you feel like you’re experiencing the world through a specific character’s eyes. The character I’ve chosen is, of course, the classically beautiful “lonely spaceman”…and it totally works.

As far as song structure and actual melodies, Reidell remains loyal and true to the originals. It’s within the instrumentation that he asserts his musical personality. In his hands, big, beloved opening track “Behind the Lines” kicks off as an ’80s video game theme, then morphs into an echoey, ridiculously sweet, imagine if Michael McDonald joined Flaming Lips on keys, fusion. Reidell’s vocal is more laid back then Collins’s excitable yelp on the original and brings to mind, of all things, Peter Gabriel on his own “Solsbury Hill.” Strange but true!

At just over a minute, “Guide Vocal” is less a song and more a brief moment of peace between 2 louder tunes but it’s always been unerringly pretty and sad. Reidell molds it into a robotic, spaced-out and lonely goodbye (and with that provides the perfect introspective moment for our imaginary astronaut hero).

“Man of Our Times” featured one of Phil Collins’ more endearingly scenery chewing vocals on the original (as well as some gigantic, Godzilla-sized drumming), which is to say everything sounded huge. This version is exceptionally faithful with a similar vocal, the only difference being some slightly lowdown tweaks to the synth sound. There’s nothing intrinsically wrong with this, and it remains a great song, but it’s one of the lesser lights here.

The album’s only moment of genuine, what-the-hell weirdness is reserved for the big hit. While Reidell refers to “Misunderstanding” as “the original sadboy anthem” (I would like to add that sad girl is also applicable), he actually twists it into something so off-kilter that it’s impossible to feel sad no matter how acute your feelings of rejection might be when you are listening to it. Featuring a vocal from Black Moth bandmate Tobacco, Reidell reimagines the sadboy/girl anthem as a fuzzy, electronic shuffle that sounds as if it was recorded under a blanket. Plus there’s an ostentatious, fun and wonky guitar solo that adds some real brightness to the proceedings.

Power ballad “Heathaze” is transformed into a foggy, ethereal space jam, perfect for hanging by your tether and heading out of the capsule for a walk.

The album’s other famed single, the fist-pumping, time signature grab bag “Turn It On Again,” is a joyous affair and features Reidell’s most impassioned vocal performance. Purists might recoil at the cheap electronic drumbeat employed here, but the brief showy guitar flourishes during the classic I-I-I pseudo-chorus are irresistible and just ridiculously fun.

Self-pity’s theme song “Alone Tonight” exudes more lonely spaceman vibes on the verses and goes big on the chorus, which was always this song’s high point. What’s odd is how much this take reminded me of The Bee Gees in their wilderness years of the early ’70s, when they were kicking out wonderfully obscure, dusty, lonely rock stuff that no one was interested in; it was all so damn good, and this radiates a very similar vibe.

With its Gabriel-era Genesis flavor, “Cul-De-Sac” has alway been kind of an odd song out on Duke. Its mention of an “army thousands strong” and reference to “the king” harken back to the old stuff about mythical lands, fair maidens, and imaginary creatures. Reidell sands down the sharp edges of the original by combining his gauzy vocals with a warm and slightly cheesy synth backdrop. As a result, it’s the perfect theme for our spaceman’s climactic end (or maybe beginning, not sure, haven’t completely worked out this tale in my head yet).

As mentioned earlier, Reidell only covers 9 of the 12 tracks from the original album. While it’s understandable that he would avoid “Duke’s Travels/Duke’s End” the 11 minute prog jam/suite that closes the album, it’s disappointing that he didn’t include his version of  Collins’s soul flaying divorce song “Please Don’t Ask’. Based on the quality and reverential joy expressed in the other tracks it likely would’ve been a beauty.

There’s always a danger in loving an album too much, playing something so often and getting so familiar with its construction and intimate details that you unintentionally kill whatever mystique it once held for you. All of a sudden that cool, shiny, wondrous thing is just something you used to love. But as we know only too well around here, one of the things that can rekindle that initial bloom of love is a kick-ass cover. Steve Reidell nailed it with Duke 40th. It’s a real joy to witness someone loving an album so unabashedly to want to cover the whole thing, without irony and just because (right down to the cover art, which I found particularly heartwarming).

The fact is, I didn’t know I needed this album, but I did and am just kind of psyched it exists (in other words, yes, never dreamed I’d have this feeling). If you have any abiding love for the original, this will only further enhance those feelings. Duke (40th Anniversary) is a total sweetheart.

4.Man of Our Times

7.Turn It on Again