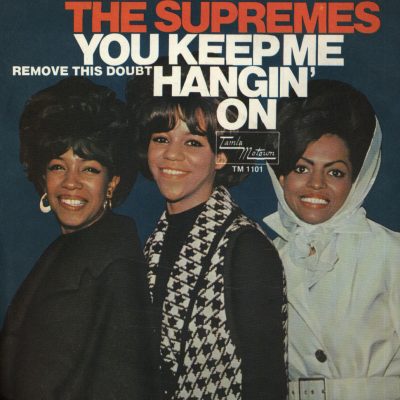 Lead-singer Diana Ross sells the song with her typically cool and sassy vocal, which suggests a girl taking back control of her life as she faces up to the fact that her ex is, basically, a selfish asshole. She’s helped by the especially potent backing vocals of Mary Wilson and Florence Ballard (the latter of whom has a line all to herself!), as well as the reliably tight musicianship of the Funk Brothers, centering on Eddie Willis’ arresting Morse-code-style guitar part. She’s helped, also, by it being a simply massive tune that damns the torpedoes and goes full speed ahead. Little wonder that it was the Supremes’ eighth #1 on the Billboard Hot 100.

As a defiant pop record seemingly straight from the mouth of a girl having it out with a troublesome guy, “You Keep Me Hangin’ On” paved the way for such greats as Aretha Franklin’s “Think!” (1968), Gloria Gaynor’s “I Will Survive” (1978), Eurythmics’ “Thorn in My Side” (1986), Kelis’ “Caught Out There” (1999), and maybe even the Destiny’s Child anthem “Survivor” (2001). Who, then, would dare cover such a landmark song, one which Ross herself would be performing this summer at Glastonbury Festival, were it not for a certain worldwide pandemic? Well, scores of acts have had a go at it over the years, including Aretha, Reba McEntire, and several of the male variety. Of all these, there are three who really stand out, who have, I’ll wager, never been mentioned in the same article before:

Hugh Masekela did a good job.

Wilson Pickett did it better.

Kim Wilde did it best.

Hugh Masekela – “You Keep Me Hangin’ On” (The Supremes cover)

Having escaped apartheid in his native South Africa, trumpeter and singer Hugh Masekela was making jazzy hit records in California by the time he came to cover “You Keep Me Hangin’ On” in 1970. He was no doubt aware that psych-rock band Vanilla Fudge had slowed the song down considerably for their hit version of 1967, so as to tease out the hurt in the lyrics. Masekela did a similar job, though soaking the song in weary melancholy that seemed to suggest he’d suffered years of emotional neglect from his woman. He drew out the anguished words (“You keep me hangin’ o-o-o-on”) and matched them with sorrowful trumpet lines, joined by entrancing electric piano from Joe Sample. You can find the finished product on his pretty rare Reconstruction album, though it deserves to be much more widely known.

Wilson Pickett – “You Keep Me Hangin’ On” (The Supremes cover)

Alabama soul legend Wilson Pickett made the Supremes’ song his own in late 1969. He was perhaps more overtly influenced by Vanilla Fudge than was Masekela in this, while continuing a contemporary tradition of performing big and emotional makeovers of pop songs that perhaps began with Joe Cocker’s “With A Little Help From My Friends” (1968). Pickett reduced its speed, cut out some of the talk, and gave the song one of his most visceral vocals. He further achieved the huge soul sound he wanted by acquiring the services of Cissy Houston and Judy Clay on backing vocals, together with the Cold Grits band, and the Muscle Shoals Rhythm Section.

The resulting Atlantic single may have only reached #16 on the US R&B chart, but you’ve got to admire the way Pickett breaks the song down midway through, and applies those tortured improvisations as only he can. “You know you don’t love me.” “I’m growing weaker day by day.” “My life to you don’t mean a doggone thing.” Poor Wilson.

Kim Wilde – “You Keep Me Hangin’ On” (The Supremes cover)

British singer Kim Wilde did such a fine job of reinterpreting the Supremes’ song that it made her, between ’87 and ’88, one of the biggest female pop stars on the planet. She was flagging a bit hitwise in the UK in ’85 and ’86 (anyone care for the rockabilly “Rage to Love”? Anyone even remember “Schoolgirl”?) and hadn’t been heard of in the US since she had a minor hit with “Kids in America” in 1981. Yet here she was with a highly confident, Hi-NRG version of “You Keep Me Hangin’ On,” by which she restored the song to the status of pure pop perfection.

She projected plenty of attitude on the track, in honor of Ross, and made the lyrics slightly edgier (“You’re just using me / Hey, abusing me”). She also had the support, once more, of brother Ricky, who gave the record tremendous energy as producer: an intro like that of Jan Hammer’s “Miami Vice Theme,” and the kind of pulsating bass line Donna Summer would go mad for.

The result was a UK #2 in October ’86 and, more historically, Wilde taking the song back to the top of the Billboard Hot 100 in June ’87. She also had a #1 with the track in Australia and Canada, with the cumulative effect being that she got a call from Michael Jackson, asking her to be the opening act on his Bad World Tour of Europe in ’88. You can’t get much bigger than that.