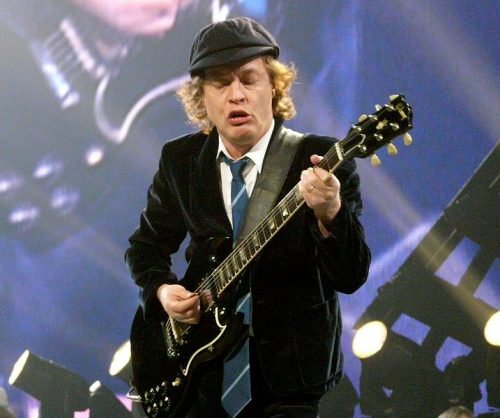 However you feel about the band, you’re probably at least partially familiar with Angus Young, the school uniform-clad lead guitarist who can generally be found soloing wildly while sprinting from one end of the stage to the other. Today is Angus’ 65th birthday, and we’re celebrating by gathering some of the finest AC/DC covers the internet has to offer.

The only problem is that AC/DC are notoriously hard to cover. The unique formula that Angus and his late brother Malcolm created in the ’70s has proved completely inimitable, to the point where even the best attempts to replicate it end up sounding weirdly off.

As it turns out, the only way to successfully cover AC/DC is to think outside the box, which is what the performers below have done – with intriguing results. Happy Birthday, Angus!

This wordily-named orchestra has made a habit of adapting hard-rock anthems into classy big band numbers. AC/DC proves well suited to this approach; perhaps the massive sound of Angus and Malcolm’s guitars can only be recaptured by a full orchestra. Arranger/Conductor Oskar Rózsa looks like he’s having a whale of a time.

On the other hand, maybe less is more when it comes to covering AC/DC. Croatian-Slovenian cellist duo Luka Šulić and Stjepan Hauser have been adapting well-known pop and rock songs into cello throwdowns for nearly a decade, and their cover of the bombastic “Thunderstruck” is one of their most innovative.

The Brian Setzer Orchestra – Let There Be Rock (AC/DC cover)

AC/DC have stayed consistently true to their two guitars/drums/bass lineup over the years, with nary a stray horn or keyboard appearing on any of their albums. But what would AC/DC sound like with horns and keyboards? Brian Setzer has the answer. Appropriately, Setzer’s version of “Let There Be Rock” takes AC/DC’s beloved rock & roll back to its roots with a 1950s-style jump blues arrangement.

The Qatar Philharmonic Orchestra – Back In Black (AC/DC cover)

Another orchestra now, with the Qatar Philharmonic’s take on “Back In Black.” Hearing such a large group of musicians crank out Malcolm Young’s iconic riff gives one a new respect for what AC/DC accomplished with two guitars. It’s not entirely clear why the drummer in the video appears to be playing from an entirely different location, but it doesn’t matter. This version rocks.

Check out Five Good Covers of “Back in Black” and “You Shook Me All Night Long” in our archives.

One Response to “They Say It’s Your Birthday: Angus Young of AC/DC”