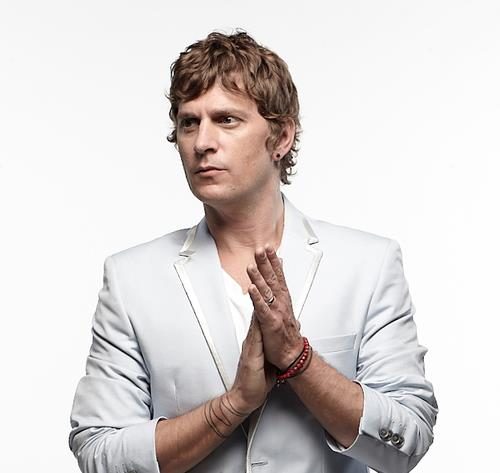 It’s a special day beyond being the day to eat chocolate and celebrate how lovable you are. Today we celebrate Rob Thomas’s 48th birthday. And what a year it will be. We’re still bopping along to Thomas’s fourth solo album, released last year, but 2020 is blessing us with a Matchbox Twenty tour.

Matchbox Twenty released three albums (including one with some controversial cover art) before Thomas went solo, spurred by his involvement in Santana’s “Smooth.” Thomas helped write the song, but the part was supposed to be sung by George Michael. However, Santana liked what Thomas did with it in the demo, so he brought Thomas on board. Thomas then interwove his solo career with a Matchbox Twenty comeback. Beyond helping with “Smooth,” Thomas was also a songwriter for big names such as Willie Nelson, Travis Tritt, and Mick Jagger. Jagger returned the favor, co-writing Mathcbox Twenty’s top-30 hit “Disease.”

Whether you are a ride-or-die Matchbox Twenty fan, through the name change from Matchbox 20 to Matchbox Twenty in 2000, or an appreciator of Thomas’s solo endeavors, these covers will help you celebrate Thomas in all of his glory. It just so happens that these covers are all a bit on the lonely/heartbroken side of the love spectrum, all the better if you’re in a less festive mood this Valentine’s Day and want to commiserate.

Rob Thomas’s first single form his debut solo album …Something to Be gets a somber twist in this cover (skip to 0:28 to get to the heart of it). Despite being released in February (15 years ago, happy anniversary!), the original version makes me think of summer by the pool, with its cool high-hat and short guitar and even classical string interjections. In this cover, a slightly dramatic piano takes the place of the myriad of instrumentation in the original. Soft but assertive drum pats also join in. The vocals are more pleading than Thomas’s and are sung as if there is no hope for leaving lonely status.

Joe McBride – This Is How A Heart Breaks (Rob Thomas cover)

…Something to Be‘s second single also gets a complete change of pace in this cover. The original builds in urgency with percussion that sets a beat at jogging pace and then escalates to a full-on sprint. The bridge diverges from the style of the rest of the song, sounding a bit more cheery despite the lyrics, but it then leads into a guitar solo that brings the edge back. Joe McBride starts out with some spunky bass and piano; we have no idea that we’re about to hear a Rob Thomas song. When he launches into the lyrics, we hear a much less angry version. There isn’t a noticeable shift in tempo between the verses and chorus leading to a much more measured pace, contrasting the almost frenetic energy of the original. A piano solo frames the bridge, which maintains its stand-out status within the rest of the song. The jazz flavor of this cover has us snapping our fingers instead of worrying about how much more we can take.

Moving on to Thomas’s second solo album, this was Cradlesong‘s first single. In the original, the verses are dominated by Thomas’s vocals paired with some percussion. As we get closer to the chorus, more instruments join in until we reach the full-blown chorus where everything lets loose. We can just picture an explosion of sentiment and sound as “she says, oh I can’t take no more.” Later on in the song we get a backup chorus to echo this sentiment, reminding the listener of how many tried their best and now can’t win. This cover provides  a much more solo experience. Simple piano accompanies the mournful vocals. Instead of increasing the intensity of the instrumentation in the chorus, ortoPilot builds complexity using harmony. Where the original has many instruments and voices echoing the point of view of the lyrics, this cover doubles down on aloneness. The harmony is even layered, coming from ortoPilot’s lone singer instead of an additional participant. This solitary approach brings a new meaning to the phrases “she’ll be alright / just not tonight.” These lines now sound like a self-assuring mantra, repeated until it’s true.

We can’t celebrate Thomas’s birthday without throwing back to Matchbox Twenty and their ability to identify with a listener’s sense of malaise. This song comes off of the band’s third album, More Than You Think You Are, and according to Billboard/Wikipedia, it was the second-most-played song in the United States in 2003. A lot of people must have been feeling a bit under the weather. The opening line gets a slight country spin from Jimmie Allen, but the rest of the tune stays true to the original. The simple percussion and guitar of the original get louder during the choruses, but back off during the verses, letting Thomas’s soulful voice ring. This version keeps the simplicity of the acoustic guitar throughout and Allen’s vocals match the fullness of Thomas’s voice, and even give us a little scatting to finish out the song.

Now for a cover by Rob Thomas. Picking one song to include from the set list of Rob Thomas’s episode on “Live From Daryl’s House” was nearly impossible; every song is incredible. Aside from this Hall and Oates classic, another beauty is when they collaborate on Rob Thomas’s “Someday” or, for those who think this post is too light on Matchbox Twenty classics, when they sing “3 AM” (this was technically under the reign of “Matchbox 20”). This cover shows Rob Thomas’s versatility, prowess, and (I’ll unironically say) “smooth”ness. Not everyone can stand in for John Oates. But no stranger to lovers being gone, this song is perfect for Thomas’s forlorn yet edgy energy. You can watch him get invested in the tune, and his vocals are flawless. Although Hall takes the iconic “she’s go-o-o-o-one,” toward the end of the song, Thomas seamlessly backs him up with plenty of heartfelt “oh, I”s to close out this gem of a cover.

One Response to “They Say It’s Your Birthday: Rob Thomas”