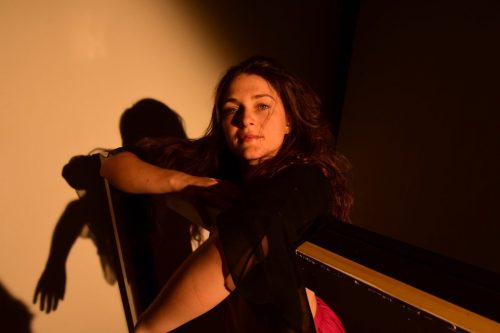 If you had to pick one signature song for Stevie Nicks, it’d be hard to argue against 1982’s “Gypsy” as the definitive representation of her legend. With its lace, paper flowers, bittersweet memories, and lush melody, it completely captures the glorious essence of everything Stevie. The song’s video supports this notion, featuring not only Stevie’s signature twirling dance (yeah, she has a signature move too) but the best “running out of the nightclub in high-heeled boots into the pouring rain and wailing ‘looooove’ scene” that’s ever been committed to celluloid.

But forget all this for a second. For once upon a time “Gypsy” was a much simpler thing, starting life as a spare and hypnotic ballad as evidenced by Nicks’ demo. And it is this skeletal version that inspired Molly Sarlé to record her own passionate and haunting take for Aquarium Drunkard’s Lagniappe Sessions series.

Sarlé’s powerful vocal cuts like a razor, wavering and wailing before driving headlong into the song’s bridge with a staggering force. She describes her connection to “Gypsy” this way: “I first heard the demo version of ‘Gypsy’ when I was living in Los Angeles. I was going through a hard time and something about this version of the song made me feel held in the abyss. It also illuminated the meaning of the song for me in a completely different way, like it’s about watching a part of yourself come and go, a part of yourself that you need, but you don’t necessarily know how to have control over, how to make stay.”

And that’s not all; head over to Aquarium Drunkard to hear 2 more truly excellent covers by Sarlé, Big Star’s “Thirteen” and Annie Lennox’s “Why,” and download the whole set.

Check out our list of the Best Fleetwood Mac Covers Ever here.