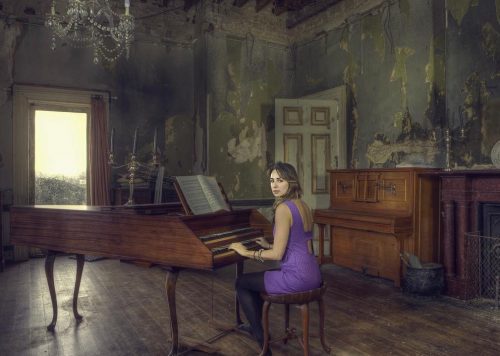 Kid Moxie’s upcoming score for indie film Not To Be Unpleasant, But We Need To Have a Serious Talk is, as film scores typically are, mostly instrumental. But it closes with a surprising cover, as Kid Moxie aka. Elena Charbila tackles Alphaville’s ’80s synth-pop classic “Big in Japan.” Her cover keeps it synthy, but adds a wistful dreampop sheen that gives it a darker undercurrent. No surprise if it sounds vaguely Twin Peak-sy; she’s worked with David Lynch and his longtime composer Angelo Badalamenti (on a new version of Blue Velvet’s “Mysteries of Love”).

Charbila just released a music video for “Big in Japan,” starring a child dancer reminiscent of Maddie Ziegler in Sia’s various music videos. “Though the score is mostly instrumental, I felt that the ‘Big In Japan’ cover summed up the wistful quality I was seeking in a fresh but also familiar way,” Charbila told Under the Radar. “It is such an iconic song I had to forget I’d ever heard it to recreate it. The video, which was shot throughout a single day at the director’s studio in DTLA, is a bit of commentary on children being forced to grow up too fast, especially in Hollywood.”

Watch Kid Moxie’s “Big in Japan” here, and preorder the soundtrack at Amazon.