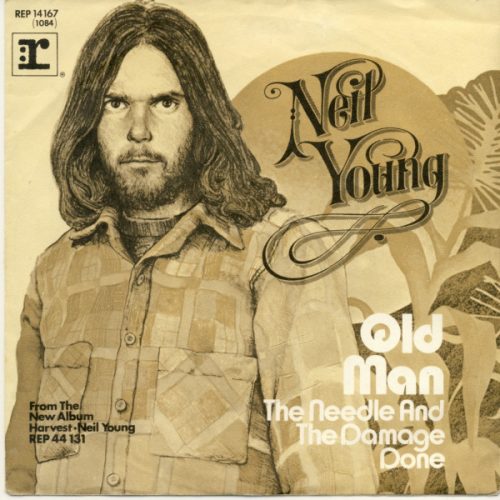 The song ultimately appeared on 1972’s Harvest album and features James Taylor delicately plucking out the most memorable 6-string banjo solo in the history of pop music, as well as the legendary Linda Ronstadt on backing vocals. After almost 50 years, it’s still as wistfully perfect as the day it was born, a rousing singalong that still requires you to have a crying towel at hand.

Its magnetic power has inspired what seems like a metric ton of cover versions, and while no one has outright “stolen” the song from Young in the style of Aretha stealing “Respect” from Otis Redding, there have been some pretty stellar interpretations along the way. What’s unusual and especially cool about them is that they tend to be of the live variety, as opposed to studio recordings. The fact is, “Old Man” lends itself perfectly to off-the-cuff, laid-back, dusty interpretations, and features a chorus “scientifically” constructed for maximum harmonizing. As far as that last point, get ready to hear people exploiting that fabulous loophole/gift in some truly transcendent ways.

There is a fabled vocal concept known as “blood harmony,” which refers to the ability of certain sets of siblings to intertwine their voices in a mellifluous, pristinely perfect way. It’s not so much to do with technique as with a deeply embedded and innate inner knowledge that science has yet to explain beyond offering up the human embodiment of it many years ago, namely the incredible Louvin Brothers. Sweden’s Baskery, consisting of sisters Greta, Stella, and Sunniva Bondessonbeen, have been covering “Old Man” for years, and while they’ve never recorded a studio version, it’s been a long time staple of their live set. As a result they have become very, very good at delivering it. The otherworldly harmonizing here is definitely of the “blood” variety, and it’s absolutely stunning, as is the instrumentation.

While Natalie Cole was best known for her sophisticated pop R & B and lush interpretations of evergreen standards, inside her beat a true rock and roll heart. Proof: she was a teenage Beatle fanatic (John was her fave); Janis Joplin was her “favorite rock n roll singer of all time”; the Rolling Stones’ “Honky Tonk Woman” was one of the songs on her very first demo tape. She covered, among others, The Beatles, Joni Mitchell and Bob Dylan, the latter of whom went so far as to customize one of his existing classics specifically for her to sing. The cherry on top and her most undeniably ROCK moment came when she joined The Allman Brothers at one of their legendary Beacon shows back in 2011, singing lead on a raucous version of “Whipping Post” and completely owning it (yes, this really happened).

After years of slick standards and polite pop jazz, Cole was getting a bit bored with having to color inside the lines and missed being able to “ad-lib and holler” when she was singing. With that, in 2006 she recorded Leavin’, featuring some more contemporary covers, including songs by Fiona Apple and Kate Bush, as well as a version of “Old Man.”

Now, while the studio version offered on the album is super-fine and heartfelt, the full-length live version from a show in Istanbul in 2011 is another species altogether. Stretched out to 6 minutes, it’s an epic rock-soul sermon featuring two drummers and an insanely powerful vocal arrangement. It comes over like some crazy, lost Fillmore East bootleg from bygone days, and is completely fierce and forceful. Unfortunately, the only footage available of this wondrous version features a particularly annoying audience member, whom you’ll hear at certain points and want to punch in the mouth. At the end of the day, though, who cares? Just pretend you’re at a show and immerse yourself in what Cole and her band are doing here, because it’s brilliant.

The Sheepdogs, purveyors of fine meat-n’-potatoes seventies radio rock for cruising down the highway and hanging out in the parking lot, have always worn their influences proudly on their sleeves. Their joyful twang sweetly evokes the spirits of bands like James Gang, Humble Pie, The Allman Brothers, and The Outlaws. But they are equally adept at stripping things down, and their version of “Old Man” is a laid-back (literally) and handsome affair with a whole bunch of sweet bonus banjo.

Canadian alt rockers and 1994 winners of the Juno award for Best Alternative Album, Rose Chronicles were only together for a few years (1992-1996, to be exact). Within that small window of existence, they recorded this wickedly cool version of “Old Man” for the first volume of the Neil Young Tribute album Borrowed Tunes, which featured a wide array of Canadian artists covering their ornery, genius rock king. Featuring some vintage Neil and Crazy Horse style feedback, this one isn’t afraid to get dirty, and it absolutely rocks.

Over the years, Lizz Wright has proven herself to be a masterful interpreter, and she’s offered up stunningly beautiful versions of tunes by everyone from Led Zeppelin to Fairport Convention/Nina Simone to Bob Dylan. At this stage, Wright can sing any song she wants and do it convincingly. As for her version of “Old Man,” this is yet another case where, while the studio version is really fine, the extended live take with its soaring vocal and epically swampy vibe is a far more powerful bow to the perfection of the song. The way Wright’s vocals ascend and increase in volume as things move along is breathtaking.