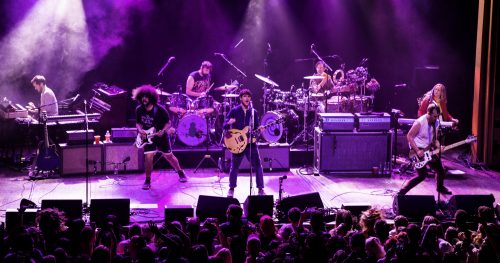 Vampire Weekend closed out the US portion of their Father of the Bride tour in Cover Me style. Performing at the intimate Mcmenimans Crystal Ballroom in Portland, Oregon, the band played several crowd requests and special covers during a special one hour acoustic set for radio station 94/7’s December to Remember series.

Koenig and Co began with a staple of their cover catalog; Bruce Springsteen’s “I’m Goin Down”. The band has covered this song so many times in so many different venues, it sounds impeccable.

A request from an audience member that Koenig recognized from a New York concert led to their next cover: “Mountain Brews” by the band Mountain Brews. Jake Longstreth of Mountain Brews made several appearances as a supporting musician with Vampire Weekend at concerts, and currently co-hosts the Beats 1 show Time Crisis with Ezra Koenig.

In the spirit of the season, the band started the next cover set with their rendition of “Little Drummer Boy” which they seamlessly transitioned into “Obvious Bicycle”.

Finally, Vampire Weekend closed out their cover tour de force with a bouncy rendition of Dusty Springfield’s “Son of a Preacher Man”. Without the horn section of the original, the band leaned on keyboardist Will Canzoneri to deliver fantastic solos on the keys which he delivered all night.