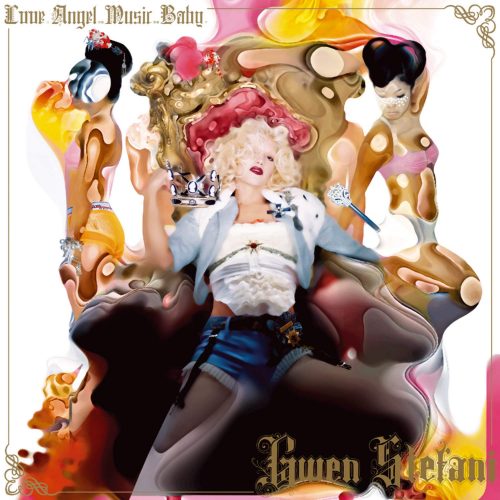 Marina and the Diamonds – What You Waiting For?

This song was Stefani’s debut solo single, after she branched out from No Doubt. It was co-written by Stefani and Linda Perry, of 4 Non Blondes. The music video features an Alice in Wonderland theme and goes through the storyline of Stefani facing writer’s block. Marina and the Diamonds brings her characteristic vocal style to this song, paired only with a spritely piano and assertive tambourine. Her voice alone packs the punch that the production of the original provided; her emphasis on the “tik-tok”s are especially pressing.

Franz Ferdinand – What You Waiting For?

I couldn’t pick just one cover of this one. Here’s another by Franz Ferdinand that takes a different approach. This cover is best described as a garage band jam-session version, and I mean that in a good way. The beginning could be any song, but then we hear the distinctive melody that accompanies the reassuring “take a chance, you stupid ho.” The “tik tok”s are more monotonous in this version, but the upbeat pace is maintained even without the electronic elements of the original.

Some trivia: this song is a favorite of David Archuleta, runner up to Season 7 of American Idol. I find this a bit unexpected and incongruous with his image, but I’m for it.

This song is, wait for it… a cover! You might have known that it samples “If I Were a Rich Man” from the Fiddler on the Roof musical, but did you know that someone else thought to turn this song into “Rich Girl” before Stefani? I did not know until now, and my mind is blown! Louchie Lou and Michie One, a ragga duo from London, can claim the original “Rich Girl,” releasing it in 1993. Stefani’s version was produced by Dr. Dre, who suggested riffing off of Lou and One’s song, and featured a rap by Eve. This cover brings the song back to its roots in Fiddler on the Roof. There is nothing like some spunky farmers juxtaposed by suave, suited University fellas. Attention to detail in the video and a nice balance of musical styles make this a standout among many other acapella versions. I’m especially impressed by the performer who takes on Eve’s rap, which was always my favorite part of the song back in the day.

A crowd favorite, this is the song that taught us once and for all how to spell b-a-n-a-n-a-s. This spelling lesson ushered in an era of spelling in songs from Fergie’s “Glamorous” to Kesha’s “Dinosaur” to Webbie’s “Independent.” The song was written by Stefani, Pharrell Williams, and Chad Hugo, and served as a retort to Courtney Love’s comment for a magazine that Gwen Stefani was a cheerleader type. Playing into that stereotype, the song’s distinctive percussive opening definitely feels like a call and response you might hear at a football game. K.Flay’s version takes a more vulnerable approach at first, slowing down the song and eschewing all but a simple accompaniment. Then she kicks it into gear, bringing the Stefani-style spunk we know and love. The song escalates even more, going full rock before K.Flay brings back the stripped style to close the song.

“Cool” brings us our first mellower song of the album. Even though the song’s lyrics are ultimately happy, LiLi Joy makes it sound a bit more somber at first. Then she becomes more jubilant, her ukulele strums perking up. By the end Joy is reaching for higher and higher notes, hitting them with ease. Joy, age fifteen at the time, was on Team Blake (Blake Shelton is now dating Gwen Stefani) on Season 16 of The Voice. She caught his attention on the first episode with her performance of this song.

This song always came off a bit creepy to me. Johnny just reminds me of the dark side of Danny Zuko and his Greased Lightning car in Grease. “Bubble Pop Electric” even has a drive-in movies reference. She Said Destroy!, a Norwegian metal band, puts a more hardcore angle on the song, providing a refreshing change from Stefani’s Barbie-girl tone. Their sound is more dissonant, and the overall song is less theatrical than the original. I like to think of it as the soundtrack of Sandy’s transformation if she would have changed into a punk rocker rather than a svelte, “tell me about it, stud” type.

Vitamin String Quartet created a whole tribute to Gwen Stefani featuring songs from her solo and No Doubt career. For this cover, they take the overtly slow and sexy jam and make it a little less in your face with the bedroom vibes. Deep percussion, induced by what sounds almost like stomps or strikes of the floor with the base of a bow, pairs with plucks on larger instruments to lay the foundation. These rich sounds contrast the soaring violins that occasionally reach for extremely high harmonics, on the verge, but just shy of squeaking.

historyteachers – Civilization (to the tune of Harajuku Girls)

The title of this album came from Stefani’s four “Harajuku Girl,” Japanese and Japanese-American backup dancers – Maya Chino, Jennifer Kita, Rino Nakasone, and Mayuko Kitayama, nicknamed Love, Angel, Music, and Baby, respectively. Stefani also launched a clothing brand of the same name. All of this led to some controversy with some accusing Stefani of cultural appropriation and reinforcing negative stereotypes about Japanese culture. Due to this controversy, it isn’t necessarily surprising that no one wanted to take on this song as a cover. Instead we get a history lesson set to the music of the original song. We have to respect the creative teachers behind this, reframing a controversial song and making it into a teachable moment.

Despite the dangerous title, this is the perfect song to groove to while driving. It was the last single off of the album, released after Stefani announced she was pregnant, and was a collaboration between Stefani and Tony Kanal, the bassist in No Doubt. It’s a shame that this track doesn’t have many covers, but this version really invests in its sound effects and adds a bit of whimsy. melodirosa is her own acapella group, carrying the vocals, background beats, and occasional emphatic claps. Even acoustically, this version has sass. Throw your windows down and sing along: “drive back baby to me, fast in your car.”

This synth-beat love song was co-written by Stefani, Gavin Rossdale (her husband at the time), and Linda Perry. The song became a promotional single in the Philippines and got a remix on the deluxe and  international versions of Love Angel Music Baby. This slower and stripped cover matches the mood set by the romantic lyrics. Williams’s voice stands out, the piano playing a secondary but soothing role. Her range reaches that of Stefani’s, and she balances power in the choruses and a softer touch in the verses.

I’m frankly surprised I couldn’t find a cover of this song. You’ll have to make your own with this karaoke-style track. This song was another collaboration between Stefani and Tony Kanal. After an intro of classical strings, the song transitions into a bit of an ’80s Madonna flare. A lesser-known spelling lesson even features towards the end of the song for those who need a refresher: “S-E-R-I-O-U-S.” A music video was recorded that doubled down on the ’80s influences, but it was unfortunately never released.

This is an underrated song buried deep into the album. The original is a bit electronic, with video game-esque sounds. This cover is a bit more heavy on the rock instrumentals while the vocals are what take on the electronic sound. Stefani delivers the lyrics in an almost resigned fashion, while Hasegawa’s delivery is a bit more urgent and seeking, his “it’s not fair”s harsher sounding. Both the original and this cover emphasize the catchy and relatable phrase “We are in a mess, a danger zone. What will happen next, you never know.”

Stefani’s album closes with an André 3000 (of OutKast) duet. The song discusses an interracial relationship, using a clip from Martin Luther King Jr.’s “I Have a Dream” speech in the ending. This usage was not credited, causing controversy, along with what some thought were cliché themes. This track has sounds reminiscent of the video-game notes in the previous song. Computer-meets-organ sounds chime in throughout. This cover is also cheating a bit as it is a remix, not a cover, and only features a small part of the original song. However, the techno spirit hints at the style of the original’s instrumentation.

If you find any better covers for “Harajuku Girls,” “Serious,” or “Long Way to Go,” drop them in the comments!