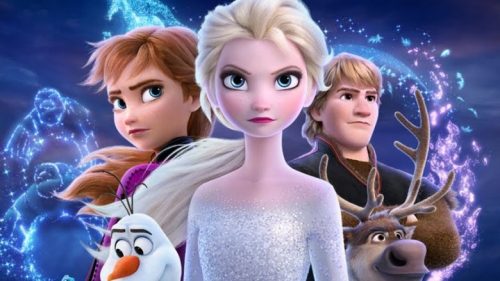 For the last few weeks, Frozen II has been the number one movie in the world. So popular, in fact, that it prompted an antitrust lawsuit in South Korea for taking up too many screens in the country. The film follows the continuing adventures of Elsa, Anna and the gang as they go on a quest to unlock … Don’t worry, no spoilers here.

Like the original, the film blends a fantasy story with a Broadway-style soundtrack. As many critics have pointed out, the movie does not contain another “Let It Go.” How could it really? That was a decade-defining song for a generation of young listeners. Even Disney cannot recapture that kind of magic. But after multiple listens to the Frozen II soundtrack with my little one in the car, the bathtub, before bedtime and pretty much anywhere I have my phone, I’ve concluded that the music holds up well against some of the other songs from Frozen. One could do worse for a kids’ album, believe me.

The Frozen II soundtrack includes three covers of songs from the movie recorded by Panic! at the Disco, Kacey Musgraves and Weezer. Here’s a quick overview of each:

Panic! at the Disco – Into the Unknown (Idina Menzel and AURORA cover)

When Elsa hears the siren’s call, voiced by the Norwegian singer AURORA, she responds by belting this tune taking her, well, “Into the Unknown.” Panic! at the Disco reworks it into a hard-rocking cover for the closing credits, reminiscent of an “epic metal cover” of “Let It Go” that has received more than 5 million views on YouTube. Vocalist Brendon Urie’s booming voice carries the song, which plays like a well-styled piece of corporate rock.

During a flashback sequence at the opening of the film, Elsa and Anna’s mother sings them a lullaby about a place where “the North wind meets the sea.” Written to resemble a folk tune, country singer Kacey Musgraves plays up the song’s roots elements. She sings it as stripped-down acoustic tune that could be easily mistaken for an early Joan Baez tune. Musgraves’ cover would be just as appropriate on the stage of the Grand Ole Opry as it would be on the steps of Cinderella’s castle.

“Lost in the Woods” is a love song, sung by Kristoff for his beloved Anna and she heads off an adventure without him. It’s a power-ballad similar in style to ‘80s soundtrack classics such as Peter Cetera’s “Glory of Love” from The Karate Kid Part II and Patrick Swayze’s “She’s Like the Wind” from Dirty Dancing. Regular readers on this site are surely aware that Weezer has strayed a bit from its alt-rock ‘90s origins. The group released an album of mostly ‘80s covers this year that included versions of Toto’s “Africa,” Tears for Fears’ “Everybody Wants to Rule the World” and, Eurythmics’ “Sweet Dreams (Are Made of This).” This cover could have been part of that project. They keep the piano intro intact, but added in some distorted guitar, probably to remind the parents listening that it’s Weezer. While we might not swoon for Rivers Cuomo as we do for Swayze, he shows he’s capable of handling a crescendo like a true ‘80s balladeer.