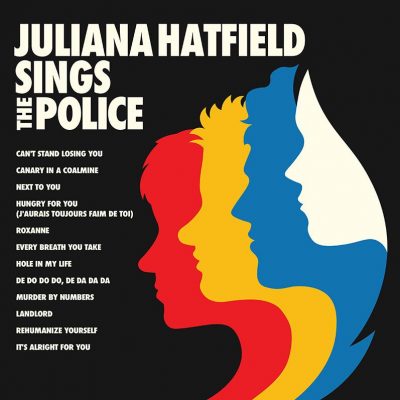 Whilst he didn’t appear on the follow-up, the debut by the Juliana Hatfield Three, or the subsequent eight albums, credited solely in her name, Hatfield cropped up a fair bit on or in Dando’s releases, notably the two biggest and most influential of his Lemonheads releases, It’s a Shame About Ray and Come On Feel the Lemonheads, in 2002 and 2003 respectively. 2012 saw another record, called merely Juliana Hatfield (confusingly, as that was her debut’s name too), which was all covers, from which the aforementioned “Rock and Roll” hailed, along with staples from Creedence Clearwater Revival and the Who, as well as lesser known fare from Teenage Fanclub and Liz Phair. A couple more solo efforts and the second JH3 record dropped 22 years after the first, followed by the ONJ tribute. And yet another solo release, so she can never be accused of being idle. In her spare time she has also been part of other bands and collaborations, notably the Blake Babies and Some Girls. Phew!

The Police are obviously very well known, the punky white boy reggae fusion of Sting and his ever rowing (with him) bandmates, Stewart Copeland and Andy Summers, with a slew of hit singles and albums between 1977 and 1983, famously reuniting for an acrimonious world tour in 2007/8.

So, how does the prolifically prodigious Hatfield tackle the acutely idiosyncratic canon of the Police? Certainly not by any aping of their style — there’s barely a skank in place. With twelve tracks, only four being the big hits, Hatfield eschews the polish of the originals for a deliberately lo-fi romp, channeling perhaps her teenage self, singing into the mirror, hairbrush for a microphone, a poster of the boys, probably at their peroxide prime, stuck haphazardly on the wall behind her.

Opening track “Can’t Stand Losing You” is a delight, a joyous concoction of what sounds like a primitive drum machine (allegedly her own playing), simply effective brushed guitar and single, then double-tracked, vocal, a swirl of synth singing over the background, the bass keeping the backline smartly in place. The affection is obvious. Straight into “Canary in a Coalmine,” and the template’s unchanged. However infectiously the guitar motif repeats, the effect is the same, if diluted, this representing my problem. As the songs keep coming, so it all blends and blurs into one, an overkill of equivalence. Bizarrely, where a change in direction is tried, notably in “Roxanne,” where at the song is slowed, propelled by a low voltage power chord effect, this somehow fails, a sour note against all the candy before. Maybe that’s intentional, with “Every Breath You Take” then bringing a second high point to the project, primarily courtesy a fuzzy and funky lead bass line.

Of the others, it is “Landlord” and “Hole in My Life” that probably work the best, the first a Copeland co-write, the Copeland/Klark Kent tropes being similar to Hatfield’s own style of songwriting. The second sounds here even more Beatle-y than the original, written at a time ahead of Sting finding his more reliable niche style, and is actually better for Hatfield’s removal of what makes it otherwise eventually a recognizable Police song. (And I write as no Beatles fan.)

I am sort of disappointed. But maybe this sort of music is not designed for this sort of listen, as a set piece, track by track. Arguably this is becoming true of all music, designed for listening as stand-alone tracks, perhaps in isolation, consumed separately rather than at all one sitting. A single song on the radio, or scoring a movie trailer, or as background in a box set. I suspect any of these songs would work better alone. Indeed, heard in a separate order, my preferences would probably alter, enthusiasm still waning as the immersion deepens.

For me, Juliana Hatfield Sings the Police is an album best heard by chance, song by single song, the player on random, all sorts of everything in between to take away the otherwise all too prevalent cloy of sweetness. Whilst a couple of the tracks rate five stars, a couple of others four, as a whole I can only offer three.