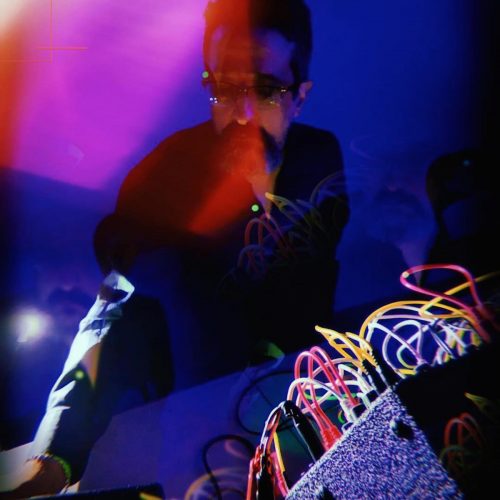 While Brad Laner has been kicking out tuneful fuzz in an assortment of incarnations since the early ’90s, he is best known for leading shoegazing popsters Medicine. The band – Laner plus a revolving group of collaborators – have operated on and off over the past 25-plus years, with gaps of up to 10 years between releases. As a solo artist in between the Medicine records, Laner has sweetly revealed himself to be an ’70s AM radio kid, recording a couple of particularly heartfelt, sludgy and exceptional covers of Top 40 nuggets, Chicago’s “Feelin’ Stronger Every Day” and Blue Magic’s “Sideshow”.

With those seeds planted, it should come as no surprise to see Laner and Medicine finally diving in and releasing a full album of covers, Scarred For Life. It’s a truly eclectic affair that brims with love and eccentricity. While it primarily features deep cuts and quietly beloved cult tunes by Judee Sill, Peter Blegvad’s Slapp Happy and Madness amongst others, its true centerpiece is one of those West Coast AM radio pop chestnuts (please don’t call it Yacht Rock) from 1977, Bob Welch’s “Sentimental Lady.”

Hollywood-born Bob Welch was a seminal figure in Fleetwood Mac history, serving as the band’s sole guitarist from 1971-1974. He bridged the established British blues band into the Californian soft-rock behemoths the world fell in love with. One specific example: he convinced the band to move to LA from the UK to seek their fortunes, which led to Mick Fleetwood’s fateful exposure to Lindsey Buckingham and Stevie Nicks.

Welch left the band in 1974, feeling things had run their course creatively and embarked on his solo career in earnest. Finally, in 1977 he hit pay dirt and the Top 10 with his first solo single, a revamped version of song he’d originally done with Fleetwood Mac in 1972, “Sentimental Lady”. With its iconic glistening guitar opening, hazy sing song melody and Christine McVie and Lindsey Buckingham backing vocals, it remains to this day gloriously syrupy and wonderful.

Medicine mold the delicate pop of the 1977 version into a gigantic, drums-to-the-front anthem , transforming the chorus into something ridiculously heavy, otherworldly, and gorgeous. It lands sound wise somewhere between The Byrds and The Jesus and Mary Chain and is a treat.

Scarred For Life is out now and in addition to the aforementioned artists features loved up deep cuts from Neil Young, Miles Davis and The Monkees that are well worth your time.