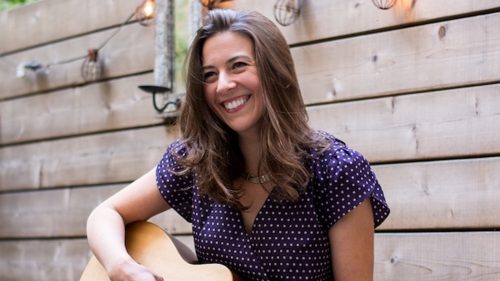 Bob Dylan has been a source of inspiration for singer/songwriter Lisa Bastoni ever since she first picked up a guitar. In 1999, she won first place at a Bob Dylan Karaoke contest at the Newport Folk Festival, singing the song “Isis.” For her seventeenth birthday, she received a copy of Dylan’s book Lyrics:1962-1985 that, according to her, is now, “Velveteen Rabbit-level falling apart from love.” About ten years ago, she started making miniature painted cardboard dioramas with scenes based on Dylan’s songs. “I realized I might be verging into the category of a little too weird as far as Dylan fandom goes, and had to dial it back a little,” she told Cover Me in an email.

For her most recent act of homage, Bastoni recorded “Workingman’s Blues #2” as the only cover on her new album How We Want To Live. The record is an acoustic-driven Americana album, with strong echoes of the late ‘60s/early ‘70s Laurel Canyon sound. “In some way, each song is an answer to a question about where we have been, where we are now, and how we want our lives to be. ‘Workingman’s Blues #2’ felt like it belonged,” she said.

Dylan released “Workingman’s Blues #2” on his 2006 album Modern Times. The record is considered one of his late-career masterpieces. “There is no precedent in rock & roll for the territory Dylan is now opening with albums that stand alongside the accomplishments of his wild youth,” Rolling Stone wrote about album on its release. “Workingman’s Blues #2” is a stream-of-consciousness dirge containing eight verses, each a poem in its own right, exploring economics, war, the high seas, love and death. Surprisingly, given the album’s popularity among Dylan’s fans, the song has not been covered as extensively as one would expect — this is Dylan after all. Secondhandsongs.com lists just two covers.

Bastoni first connected with the song while driving to a show in 2017. “I was talking with a friend about favorite Dylan songs, and he mentioned this one,” she said. “I’m sure I heard it when it came out in 2006, but hadn’t really listened closely before.” It still took multiple plays before she could truly digest the track. “My mind kept wandering down certain lines and images. This song feels almost like a lucid dream. I love the way it weaves from abandoned factories and burned out barns, to a setting sun and night birds calling, the feel of a lover’s breath. Throughout the song there is such a sense of both defiance and forgiveness. It’s tough and tender, weary and wise.”

She claims it took her a year to learn how to play the song, “which happened to be the year in which I went through a divorce, a move, and the recording of this album.” Then she spent six months recording the cover, spread out over three different studios. She plays it as an uplifting folk-country song, in a style reminiscent of Dylan’s one-time backing group The Band. The track comes with a hard-pounding backbeat and a heavy amount of organ provided by Josh Kantor, organist for the Boston Red Sox. The musicians included producer Sean Staples on guitar, the album’s main engineer Dave Westner on drums and the folk trio Lula Wiles on harmony vocals: Eleanor Buckland, Isa Burke and Mali Obomsawin (who also played bass).

“This might sound strange, but the more time I spent with the song, the more I found that many of the lines seemed to fit exactly what I was going through in my own life. It’s one of those songs that manages to paint a very detailed picture, while also leaving spaces to fill with our own interpretation of the story. I don’t entirely understand how that happens, but I began to see how each line and phrase was essential to the whole. I hope that my love and respect for the song comes across on the recording.”

Click here to listen to many covers of Bob Dylan’s songs.