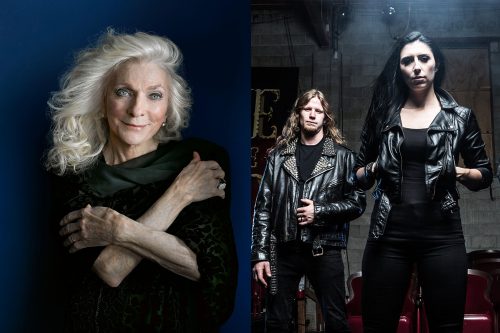 Stan Rogers’ folk song “Northwest Passage” has been called the unofficial Canadian national anthem – and by a Canadian Prime Minister, no less. Two incredibly different covers that have come out recently add more evidence to that claim, and show that the song may be crossing the country’s southern border just as it crosses genre lines.

The first cover, and certainly the tamer of the two, comes from (American) folk singer Judy Collins. Her version, from upcoming album Winter Stories, is every bit as pretty as you’d expect. She told Billboard she only learned the song a few years ago while playing at the Stan Rogers Folk Festival in Nova Scotia. “I was sitting in my dressing room looking down at this beautiful hill in the rain and I could hear this song coming up the hill,” she said. “I said, ‘Oh my God, what is that?!’ It was just the most beautiful song.” Hear her version, performed with cover song experts Chatham County Line, below. She’s got a long history covering Canadians.

Now onto the more surprising of the two: Canadian heavy-metal band Unleash the Archers beefed “Northwest Passage” up dramatically on their new 7″. They keep a bit of the original’s a cappella feel on the verses driven by knockout vocals by Brittney Slayes (great metal name), but go full power-metal on the thundering choruses. It’s one of the most dramatic genre-crossovers we’ve heard this year, but their tongue is nowhere near their cheeks, as they explained on Bandcamp:

This song means a lot to us as a band, we like to put it on during those long drives on tour and it always brings us right back home. We originally recorded it to be a bonus track for our last full length album Apex, but we loved the track so much we knew it needed special treatment. We held on to it for a bit and eventually decided to release it as its own 7″ vinyl EP with another Canadian cover song as the B side. The song ‘Northwest Passage’ is all about touring through Canada, which Stan Rogers did a lot, and how it equates to being an explorer looking for the passage all those years ago. It really hits home with us, we’ve toured through Canada too many times to count, so we know just how Stan was feeling.

Check out more covers by Judy Collins in the archive.