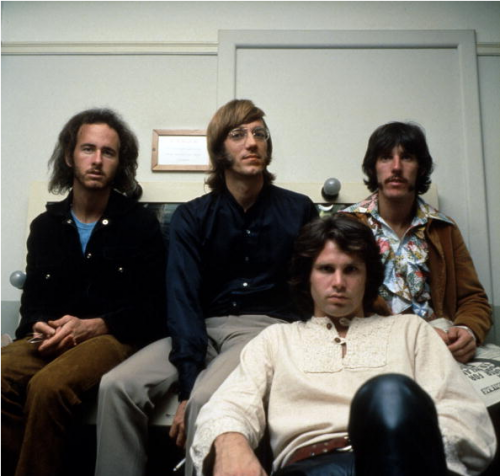 With that sort of appeal, it’s no wonder that “Roadhouse Blues” eclipsed its flipside and became the more popular choice to cover. Many covers are faithful to the original, often bordering on straight-up re-creations. Other artists manage to find the means to adapt the song to their own styles. Of these versions…

Christopher T. Gautreaux did a good job.
Steve Roy did it better.
Los Lonely Boys did it best.

Christopher T. Gautreaux, formerly of Deadboy & the Elephantmen and now performing under the name Christopher Goat, offers a solo acoustic take on “Roadhouse Blues” that is bluesy, swampy, and powerful enough to compete with the original. The pace is slower, which puts a lot of the burden on the vocals to drive the song, and Gautreaux’s voice is up to the task. He sings in a backwoods, road-weary blues style with a vocal tone somewhat reminiscent of Chris Isaak. He has an impressive range as well, going way higher in later parts of the song than Jim Morrison ever did (or could). An additional treat is a guitar break right around the 7:00 mark that sounds like it comes from a completely different song; it includes some slide work, harmonics and other goodies, transitioning back after a minute and a half to finish up the song.

There’s not much information available about Steve Roy, at least not that one could use to definitively identify the musician responsible for the next video. Nonetheless, it’s a great cover and deserves a listen. Steve Roy’s version of “Roadhouse Blues” is a metal-inspired cover that pushes this song along at a faster, more driving tempo, complete with the requisite level of guitar distortion and drums brought more forward in the mix. The vocals are clear— there’s no “cookie monster singing” on this track. The overall arrangement is straight-up metal, so this version lacks the modulation that gives the original that little bit of a bouncy blues feel. The absence of keyboards (it is a metal cover, after all) also contributes to the change in feel. Guitar leads sub in for the piano and harmonica when they can, though, and do a fine job of adding interest and listenability. Really, the only bad thing to say is that the animated video comes across as a bit creepy.

With the high regard for tradition in the history of Los Lonely Boys, it wouldn’t be surprising at all to hear them perform a cover version of a well-known song that was highly respectful of the original. At the beginning of this version of “Roadhouse Blues,” Los Lonely Boys guitarist Henry Garza launches into the familiar opening notes, then tells the crowd “Texican style, y’all” before continuing with his pedal-heavy, extended introduction. And Texican style it is, with LLB delivering a visceral performance that remains faithful to the original in almost every way, while still managing to retain a distinctive Los Lonely Boys style. Much of the credit goes to Henry’s near-flawless guitar work, especially his masterful use of varying effects, but that wouldn’t really be possible without his brothers Jojo and Ringo (on bass and drums, respectively) providing a firm foundation on which Henry can build. The vocals are good, even sounding a bit Morrison-esque at times. Of the three versions reviewed here, this is the one that checks all the boxes.