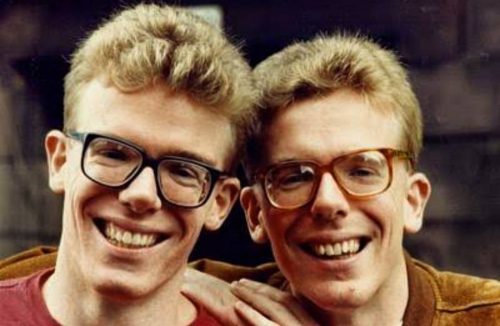 I’m all for artists taking a cover and making it their own, but in selecting covers for this article, I chose versions that were true to the energy and exuberance of the original. Versions that recast this song as a ballad or a torch song just didn’t do it for me. Of the versions I selected…

The version by Maximo Park is good.

Down By Law did it better.

Teske did it best.

British alt-rockers Maximo Park’s version sounds the least like the original, and they know it. In fact, when introducing a live version at Scotland’s now-defunct T in the Park Festival in 2007, front man Paul Smith said they were about to do something “slightly sacrilegious but also hopefully somewhat inspirational,” following that with “Let’s see if you recognize this song.” In both this live go-round and the later studio version, a sparse keyboard intro gives way to a moderate, guitar-driven verse, followed by a more intense chorus. There’s not a whole lot of dynamic in the music, and hardly any in the vocals, but the step-wise intensity provides enough variation to keep things interesting. In addition to restricting the vocal range, Smith uses a minimalist vocal approach, leaving out bits here and there, but (notably the dada-da-da’s) retaining enough to keep it the same song. The A-ha-esque music video shows the story of the lyrics in similarly minimalistic animation. To an unsophisticated ear, Maximo Park’s version of “I’m Gonna Be” might sound like some Brit-punks covering a song they don’t know the words to, but on a deeper level, this band has stripped the song to its bare-bones essentials.

Purists might find Down By Law’s proto-punk cover version more to their liking. The approach is similar to Maximo Park’s: energy that builds throughout each verse, peaking in the chorus. The main differences are that Down By Law’s version is both much more fleshed out and much more melodic. Once again, no dada-da-das, with the band substituting the word “surrender” for the post-chorus. The music video has three parts: a produced opening where guitarist/vocalist Dave Smalley is singing by himself, ostensibly dressed as one of the Reid brothers; performance clips featuring the entire band; and a narrative that shows the song’s protagonist walking through fields, mud, and more to reach the object of his affection. Two cautions: the video contains one instance of language that would be considered NSFW (unless you happen to work in a really cool place), and it takes a rather dark turn at the end.

Dutch singer/blogger/actor Teske de Schepper, professionally known as just Teske, gives us a bright, hopeful acoustic version of this song. It’s faithful to the original (save for a lyrical gender swap) and features primarily guitar and what I believe is an autoharp providing a great deal of contrast to the previous versions. While the energy level and intensity are concomitantly lower, Teske more than makes up for it with sincerity and sweetness. When you hear her, you believe she would walk 1000 miles to be with someone she loved. Teske treats the music video more like a short film documenting her trek, even concluding it with an end card reading “Fin.” And yes, this version does include the “dada-da-das. I selected this version as the best because I don’t thinks there’s any part of it that a fan of this song could dislike. It does a great job of honoring of the original while making the song distinctly hers.

Hear more great covers of the Proclaimers in our archives.